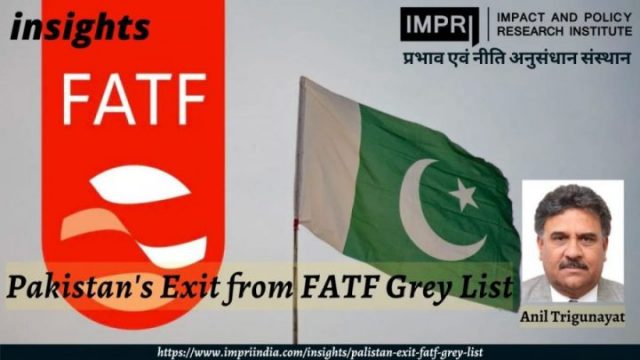 Pakistani establishment must be happy at the Diwali gift when they were moved out of the so-called ‘Grey List’ of the FATF ( Financial Action Task Force) to the so-called white List after four years or so when the onus of proof for terror financing and money laundering rested on their ill-gotten laurels. Islamabad has had that unique distinction couple of times before. But this was the longest and perhaps more painful as the economy of Pakistan has continued to deteriorate both due to natural and man-made causes.

No one would argue that the common Pakistani people do not deserve better. They indeed do. But they have suffered due to a section of their deep state and establishment taking recourse to nurture the terror groups whose decorations stand out, having been designated, global terrorists. In their blinded zero-sum approaches, Pakistan remains immune to their own people’s welfare while taking recourse to cross-border terrorism as an instrument of their foreign policy against India.

Traversing on a beaten path with no end in sight has consequences. Somehow those who harboured and handled these rabid terrorist groups for attacks like the 26/11 forget that these mercenaries will recoil and unleash their expertise on the master if they become disgruntled for whatever reason.

And it has happened in the past. Hence, Pakistani claims of suffering from extremism and terrorism sound hollow since the distinction between a ‘Good and a Bad’ terrorist is spurious and hypocritical, to say the least. Rawalpindi may learn a lesson lest the parole will be over sooner than later.

FATF has a standard procedure that sometimes might be driven by political considerations of the high and mighty when verification credentials may be considered at face value. Besides, financing mechanisms have become far more complex, with cryptocurrency and other digital and age-old Hawala transactions obfuscating the analytical landscape due to technological differential.

But at least the fear and continued scrutiny may have forced the Pak authorities to review and comply with the observations and expectations evident by the FATF ruling that 34 areas were duly addressed by the concerned authorities even if the 35th and so on have remained uncovered and unaddressed. The question that should beset one’s mind is if the designated and booty-ridden terrorists are gallivanting around with impunity on the ‘Holy’ soil of Pakistan, the mere unifocal consideration by FATF on financing aspects leaves much to be desired. Anyways, something is better than nothing.

Islamabad has become adroit in this exercise have benefited from the past two experiences. It had its first brush with FATF in 2008 when it was welcomed into the Grey List for failing to take adequate measures against terror financing and money laundering ( faltering on CFT & AML) and was asked to work closely with its Asia Pacific Grouping mechanisms which were tasked with increased monitoring.

Eventually, it moved out of the G List in 2010 but hastily returned to assume the credentials in 2012  for not being fully compliant with CFT and AML effectively. It was moved out in 2015 once it showed that a sufficient legal and regulatory framework was set up. America played a decisive role in removing Imran Khan as the Prime Minister of Pakistan.

Again in 2018, the honour was conferred upon  Islamabad for failing to take action against terror financing from its soil. Last Four decades, or for that matter, since independence, the habits and policies inculcated and executed to use cross-border terrorism against India as an integral part of their foreign policy can not be shoved under the carpet since greater realization in the international community after 9/11 on the fight against terrorism laid bare the challenges or sources of it. Until then, it was not a western concern as it was someone else’s problem. For India, 26/11 became a litmus test for global commitment or their exposed real intent.

There are many enablers for terror groups in Pakistan. Some of their friends, like China, would continue to place technical holds on the wanted terrorists at the UNSC  and its committees, like the 1267 sanctions committee. Perhaps Beijing, thinking of its iron-clad brotherhood and friendship with Pakistan and zero-sum policy against India, forgets that by supporting terror groups, it is becoming complicit and perpetrator at the same time while shredding whatever little reputation Islamabad is left with. Real friends ought to help in course correction and not perpetuate their follies against humanity.

For that matter, even the US deep state ( despite occasionally working together with India for the designation of global terrorists), peeved with India’s principled stance on the Russia-Ukraine war, would ludicrously justify the $ 450 mn funding for the revamping of Pak F16s as a contribution to fighting against terrorism thereby exposing their real intent and love for the Chess game forgetting that India has been the originator of the Chess.

New Delhi pays great attention to the FATF and other Counter terrorism mechanisms. A few years back, PM Modi at the UNGA lamented that the world could not agree to a definition of terrorism, let alone fight against it -which remains a standing danger for humanity.

Indian spokesman Arindam Bagchi commented on the exit of Pakistan from the colloquially called ‘Grey List ‘ and put the onus on the international community stating, ‘It is in global interest that the world remains clear that Pakistan must continue to take credible, verifiable, irreversible and sustained action against terrorism and terrorist financing emanating from territories under its control’ further adding that “We understand that Pakistan will continue to work with the Asia Pacific Group on Money Laundering (APG) to further improve its Anti Money Laundering (AML) /Counter Terror Financing (CFT) system”.

Hopefully, Rawalpindi will realize that terrorists are no one’s friends, and one can’t bluff the world forever lest they wish to be crowned by FATF the 4th time.

This article was also published at The Indian Observer as Trigs on Track ; Diplomacy Unwound, The saga of the FATF -Paris to Rawalpindi.