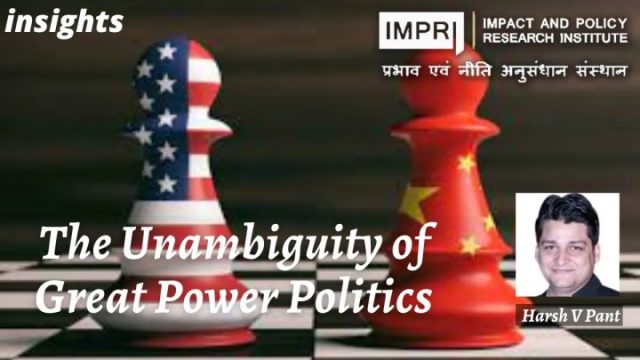 As the US and China glare at each other and leave no ambiguity about their rivalrous intent, the rest of the world must watch these shifting dynamics closely for their potential implications.

The two main protagonists in the drama of Great Power Politics are getting ready, and in the past few days have declared their intent openly and unambiguously. There is no hiding behind caveats, no hedging, and no denial. What there is, is an acceptance of the changing ground realities that are beginning to impose their own constraints on the way leaders think and operate.

The ‘post-Cold War’ phase of the past three decades seems to have come to an end, as nations around the world restructure their own ways of looking at and engaging the world. Given that today’s geopolitical and geo-economic realities are being shaped by the rise of China and the relative decline of the US from the heyday of its “unipolar moment,” it is natural that their actions and reactions would be closely watched and absorbed by everyone else.

After 22 months in office and a lot of deliberation, the Joe Biden administration of the US released its National Security Strategy earlier this month, in which it asserted that the US finds itself in a “decisive decade” where it must not only take on major powers like China that threaten to reshape the global order, but also international challenges such as pandemics, climate change, inflation, and economic well-being, which are impacting human and societal security.

This report was delayed by the Russia-Ukraine war. So, not surprisingly, the need to constrain Russia is highlighted as a major aim of US strategy, as it poses an “immediate and persistent threat to international peace and stability” through its policies that “culminated” in the invasion of Ukraine.

Yet, the document again makes it clear how far Washington has come in its China thinking. What was once seen as provocative under the Donald Trump administration is now widely accepted as consensus, with the Biden administration acknowledging China as the “most consequential geopolitical challenge”, and arguing that the US is “in the middle of a strategic competition to shape the future of the international order.”

The US security strategy underscores that “the [People’s Republic of China] is the only competitor with both the intent to reshape the international order and, increasingly, the economic, diplomatic, military, and technological power to do it.” To take on this challenge, Washington is hoping to work on two tracks: strengthening “innovation” at home with targeted investment in infrastructure, education, training, cybersecurity, and green energy, while working with allies and partners in “common cause” to compete “responsibly” with China.

This is a strategy that is laden with an emphasis on “competition” that is likely to shape global outcomes in unprecedented ways. What is striking is its focus on technology, with the suggestion that “competition to develop and deploy foundational technologies that will transform our security and economy is intensifying.” This is linked to the idea that economic and technological interdependence should be re-evaluated in the era of a new global economic order.

Reducing dependence on disruptive actors, creating greater economic and technological resilience, and working together with allies and partners to pool “technical expertise and complementary industrial capacity” is as important as protecting territory. Days before the announcement of this new strategy, the US Department of Commerce imposed its strictest export controls to date on China’s access to advanced chips for super-computing and AI, signaling that Washington is willing to challenge those trying to weaponize economic interdependence.

While one can quibble with the details, the US has made its intent clear with its new security strategy and the rest of the world will be looking at its operationalization. How will it responsibly compete with China while seeking cooperation on transnational issues? How will it manage to tackle the Russia-China “axis” together without a grand bargain with either? How will it generate new technological and economic interdependencies while taking a step back in its role as the world’s most vociferous supporter of free markets? These are some questions that will bedevil policymakers in Washington.

But China is not waiting and has already fired the first salvo with Xi Jinping’s speech at the 20th Party Congress last week where he not only highlighted China’s growing power and global influence under his first decade in power but also made it clear that he has no intention of reversing any of his policies, be they on Taiwan and Hong Kong or socioeconomic.

Acknowledging “rapid changes in the international situation,” he asserted that China has “taken a clear-cut stance against hegemonism and power politics” and “never wavered” in opposition to unilateralism and “bullying.” He was making it clear that China’s role in world politics will continue to be centered around challenging the US-led global order.

For this, China will not only speed up efforts to build the People’s Liberation Army into a “world-class military” but also focus on “high-quality education” and innovation to “renew growth” and “speed up efforts to achieve greater self-reliance in science and technology.”

So, as a new era commences in great power contestation, both sides are getting ready with their own policies. The rest of the world, including India, should be prepared to engage with the externalities—both positive and negative—that this is likely to generate.

This article was first published in the mint as We can’t escape the consequences of great power politics on October 27, 2022.