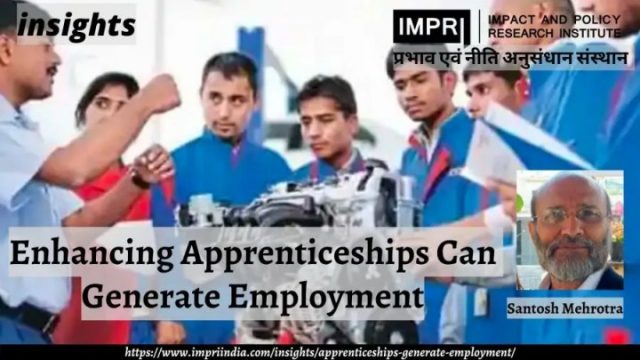 In the vast majority of low-income and middle-income countries (LICs/MICs), most students at the secondary/higher secondary level are engaged in general academic education, not vocational education or training. For such students, the transition to work is usually traumatic. Most end up working in informal enterprises where they acquire some vocational skill informally, with no certification. The global average for informal employment in total employment is 61%; in India, it is 91%, with nearly as high a share of unorganised enterprises.

If governments wish to raise employment levels in formal sector enterprises and prepare school leavers for work, it is critical that systems of internships and apprenticeships – formally approved and mandated – are encouraged.

The case of Apprenticeships in India

India’s workforce is the second largest in the world after China’s. However, less than 5% of this workforce has formally acquired vocational education and training. What’s more, even when combined with those who have acquired informal vocational training, the workforce share of people with any training does not exceed 10% (though in the non-farm sector, this figure is 20% and that of the industrial workforce 44%).

No formal firm, whether in industry or modern services, will employ such poorly educated workers in their enterprises.

Formal apprenticeships have historically been provided in India following the Apprenticeship Act, of 1961. However, until 2011, fewer than 250,000 apprentices were in the formal sector.

The 2014 amendments to the Act require all establishments (units/employers) that have a workforce (regular employees as well as contract labour) of 30 or more workers to have apprentices constitute between 2.5%-15% of this workforce. This is optional for establishments with 4-29 workers, which is problematic as it legitimises informal apprenticeships.

Despite the small scale of formal apprenticeships among the Indian workforce, a yet-to-be-published International Labour Organisation (ILO) study indicates that in India, more than 90% of registered apprentices complete the apprenticeship they undertake; 66% get placed within six months, and 81% within 12 months of completing the course, which is much higher than any other form of skill training.

Apprenticeship is a good way to make young school leavers workforce-ready. This is critical since 5-6 million youth are joining the labour force each year, looking for work, in addition to the nearly 40 million unemployed in India.

The ILO study finds that although the number of apprentices in India is increasing – it crossed the 500,000 mark in March 2022, given the size of the workforce, the potential capacity of apprentices ranges from 2-2.5 million contracts.

In accordance with the amendments to the Apprenticeship Act, for every 10,000 employed workers, the number of apprentices should be between 250-1,500. However, apprentice intake per 10,000 workers is as low as 7; much lower than Denmark, Switzerland, and Germany, and lower even than Cambodia, South Africa and Senegal.

The biggest problem the implementation of the Act has faced, since its inception, is that registered small and medium enterprises (SMEs), as well as most large private corporates, have not been keen on taking on apprentices. Small enterprises provide employment to millions. Much of the workforce that starts working in the informal sector soon acquire technical skills and then enters the formal labour market. Informal apprenticeships, therefore, can be an effective way to prepare this workforce with appropriate, hands-on skills.

We suggest here, again, that it is possible to implement, as part of the cluster-development programmes of the Micro, Small and Medium Enterprises (MSME) Ministry, a cluster-based model for apprenticeships and to use recognition of prior learning (RPL) to provide formal apprenticeships to those who have learnt through informal ones.

The 2014 amendments to the Apprenticeship Act expanded opportunities for early school leavers by opening apprenticeships to:

(ii) early school leavers who have not undergone any skill training; and

(iii) University graduates from any discipline.

In November 2021, the government approved the inclusion of apprenticeship training to students of general streams, such as those with Bachelor’s degrees in arts, science, commerce, business administration and computer science.

Apprentices under the Ministry of Skill Development and Entrepreneurship (MSDE) grew exponentially after the apprenticeship reforms; the inclusion of optional trade apprentices as determined by employers (as opposed to trades prescribed by the government); the convergence of apprenticeship with short-term skilling; the formal recognition of the role of intermediaries between the employing establishments and skills training institutions; and the incentivising of both industry and apprentices.

However, the ILO study notes that only 30,165 establishments currently actively engage apprentices in designated trades. This is insignificant compared to the total establishments in the country (64 million, including formal and informal). Out of these, 36,000 apprentices are in Union government public sector enterprises, and 194,000 are in state government-owned enterprises and the private sector.

Some large corporates have, in recent years, been more forthcoming. Maruti Suzuki India Limited, for instance, has signed MoUs with six Industrial Training Institutes (ITI; which have existed since the early 1950s), offering dual training to students and later absorbing them into its own workforce.

It is critical that vocational students have progression pathways from apprenticeship to higher academics. I had argued in my working paper for the Institute of Applied Manpower Research in 2012, the introduction of a national vocational education qualification framework should be used as a basis for introducing greater flexibility within both general academic and vocational coursework, to enable students to pass seamlessly from one stream to the other, and vice versa. Some efforts have recently been made in India towards achieving that objective, but problems remain.

Similarly, in accordance with a proposal, we made 10 years ago, a high-level committee to develop a Unified Credit Accumulation and Transfer Framework for both vocational and general education was constituted in November 2021. This report has been submitted to the government in September 2022.

Other new initiatives are needed. There are 5,500 industry clusters in India; they largely consist of MSMEs. It is now crucial to put a system in place wherein MSME associations/trade or craft associations/etc are active stakeholders. These local/sectoral/microenterprise associations can aggregate demand, consolidate batches and ensure the organisation of Recognition of Prior Learning (RPL) and further apprenticeship training in these clusters.

The article was first published at The Wire as Improving Apprenticeships Can Create Jobs. But First We Need More of Them.