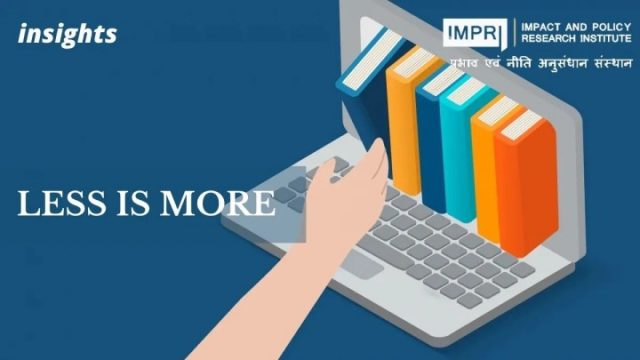 When Toni Morrison’s novella Home was released in 2012, one of the discussing points was the length of the book. Readers and critics alike (including the editor of the book) felt it was too short and unlike Morrison’s style of epic writing in her previous novels.

In an interview, on being asked whether the length was indeed inadequate, Morrison insisted, “it is harder to write less to make it more.” Less was more for Morrison and saying less to mean and convey more is not easy.

Why am I recounting Morrison? Because this is precisely what I felt like an independent researcher as I returned enriched after participating in the 3-day immersive online certificate course on Feminism and Global Social Transformation, organized by IMPRI (Impact and Policy Research Institute) (link: https://www.impriindia.com/event/feminism-global-social-transformation/).

At the first glance, three days could justifiably seem rather insufficient to pack in everything that feminism stands for as an ideology and a way of living.

What was truly remarkable about this course was its in-depth exploration of feminist history, epistemology, politics, and so on within the compactness of three-hour lectures by nine academics, field experts, historians in a span of three measly days. True to its word, the course was indeed ‘immersive’.

The structure of the course, the superlative discussions on the virtual platform, and the unrelenting dedication and commitment shown by the resource persons were applause-worthy. Moreover, the essential reading material and exhaustive reference lists shared by the lecturers came as a bonus.

Most of the time, we as new entrants in the field of research find ourselves rather clueless in trying to figure out the right book or links to useful reading suggestions in a sea of options. Navigation and negotiation are skills that a researcher ought to master. And with the able guidance from the mentors such as the good Samaritans at IMPRI, the road to a fulfilling research experience becomes less uneven and the ride is not bumpy.

As a learner, I did not return feeling inadequate, which was my initial fear given the vastness of a subject like feminism and the limitedness of three days by way of the course’s duration. On the contrary, I returned feeling positively overwhelmed. I am extremely delighted that my faith in the course overshadowed my suspicion regarding the duration of the course.

The manner in which all the professors deliberated on some of the crucial themes concerning feminist movements and struggles in India and the world, plural trends of feminism in excavating the ‘herstory’ from a ‘history’ of heroes and male bastions, feminist praxis in South Asian countries, the importance of recognizing feminist leadership in freedom struggles,

the emergence of feminism and its waves, transnational feminism and activism, intersectionality and its roots in feminism, decolonization of western feminism, the question of representation and finding the ‘self’ in that representation, feminist objectification, gender mainstreaming in EU policies, agenda for action in MENA regions, and ethics of care among others opened the gates of deeper analysis, critique, dialogue, and debates for all the participants.

With immense gratitude, I would like to thank the entire team of IMPRI for their exceptional efforts in ideating and executing such a holistic and multi-pronged program for research scholars, students, and teachers across continents to understand and cultivate the sensibility and sensitivity toward envisioning an egalitarian and sustainable society where, as Prof. Linda Lane pointed out in her lecture on intersectional feminism, we must strive to “move from me, me, me to we, we, we”.

I do look forward to attending more such workshops in the future. This 3-day course has been immensely insightful and tremendously helpful.