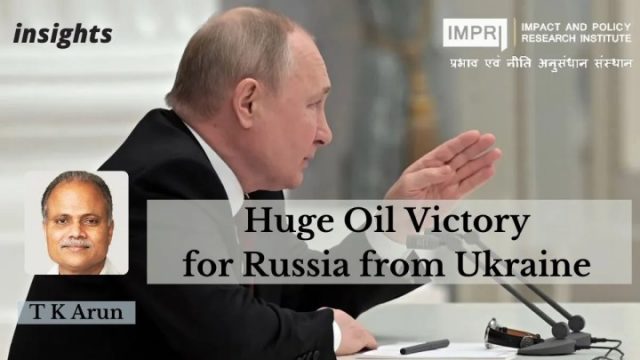 Putin, playing for geopolitical gains, not just economic benefits, wants the world to recognize Russia as a global power. From being obsessed with Xi Jinping and China as the rivals that matter, the Western world has focused on Russia for three straight months, and that itself has served Putin’s interests

If Russian President Vladimir Putin were an Indian politician, his representatives would be discretely collecting hefty commissions from the world’s largest oil and gas companies. The reported profits of five oil and gas giants — Exxon Mobil, BP, Shell, Total, and Chevron — went up 49% from the third quarter of Calendar 2021 to the fourth quarter.

Three of the biggest oil companies do not figure on the list — Saudi Aramco, the biggest, and two Chinese biggies, PetroChina and Sinopec, but their results are only likely to reinforce the trend, rather than dilute it.

According to Reuters, the average price of natural gas exports in 2021 went up from $156.3 per 1,000 cubic meters, as per the initial estimates of Russia’s Economy ministry, to $280 per 1,000 cubic meters. Russia ran a historically high current account surplus of 7% of GDP, thanks to high oil and gas prices.

Of course, the year-long performance is not on account of the Ukraine standoff, but due to a combination of factors that depressed supplies from North and South America, an extremely cold winter that drove up the demand for energy for heating, and a desperate oil cartel, Opec,

that had decided to squeeze oil supplies below 4 million barrels a day, driving up the price of crude, and indirectly, of gas, even as the International Energy Agency forecast a post-pandemic recovery with a downward shift in the demand curve for oil and gas.

But there is no gainsaying the effect of Russia’s mobilization of troops on Ukraine’s eastern and northern borders on energy prices. Russia’s Ukraine standoff started on October 26. Brent crude stood at $85.65 a barrel that day. Then a Coronavirus variant scare spread over the world and prices dropped, to reach a low of $69.88 per barrel on Dec 3.

Since then, Brent crude has closed in on $100 a barrel, moderated, as it is, by stray reports of Iran negotiating deals in the expectation of the Iran nuclear deal being revived, and Iran being able to bring its own output to augment global supplies.

But Putin is playing for geopolitical gains, not just economic benefits. He wants the world to recognize Russia as a global power and not threaten that status by NATO deployments in his immediate neighborhood. From being obsessed with Xi Jinping and China as the rivals that matter, the Western world has focused on Russia for three straight months, and that itself has served Putin’s interests.

The West has threatened dire economic sanctions, in case Russia invades Ukraine. Putin is gambling that the West would not have the stomach to carry its threat through. If Russian banks are kicked out of the SWIFT messaging system for global inter-bank transfer of funds, and the US were to impose secondary sanctions, meaning that any entity that dealt with a sanctioned Russian entity would also face sanctions, that is, would be kicked off dollar settlement systems, then, Europe would be unable to pay for Russian gas.

That would choke off Russian gas supplies, accounting for 40% of Europe’s gas. That would push the cost of energy sky-high across the board, as Europe scrambles to secure alternate supplies and bids up the price of gas everywhere.

A moot point is, are Europeans, a fair share of whom cannot see that they’re getting vaccinated against COVID-19 is not just about protecting themselves but about protecting others as well, particularly the elderly and those on the frontline of battling the pandemic, ready to sacrifice their hard-earned money on avoidable energy bills, to protect the right of Ukraine to join NATO?

Are people, whose sense of shared obligations as citizens of the same country is so frayed as to see vaccination as an authoritarian attack on personal autonomy, ready to make personal sacrifices in solidarity with the people of faraway Ukraine? Perhaps, Putin is betting that they are not and that the Europeans would not go through with the sanctions the US has threatened. US oil companies stand to gain substantially from Russian gas being shut out of Europe, of course, a point that is unlikely to escape notice in Paris and Berlin.

But Berlin has suspended Nord Stream 2, the latest pipeline to transport gas from Russia to Europe that has been built but not yet commissioned. It would run parallel to the original Nord Stream that brings natural gas from western Siberia to Germany, passing through the bottom of the Baltic Sea. In addition, there are pipelines that supply Russian gas to Europe running through Ukraine, Turkey, and Poland. Nord Stream 2 has been financed by Russia’s Gazprom and western companies.

Does the readiness to suspend Nord Stream 2 not show German willingness to abjure gas tainted by Russian imperialism? It does not. Writing to the Economist newspaper, Sergiy Makogon, Chief Executive of Gas Transmission System Operator of Ukraine, Kyiv, claims that the pipelines passing through Ukraine alone would allow export of 146 billion cubic meters of gas per year, although at present it transports only 40 bcm per year. So, postponing Nord Stream 2’s commissioning makes no material difference.

Russia is unlikely to turn off the gas as an act of aggression against Europe. Severe sanctions would make it difficult for western banks to make payments to Russian entities, thereby cutting off the import of Russian gas. Sure, there are some gas reserves that Europe can draw on, but these have been depleted somewhat by the extremely cold winter that Europe has witnessed this time around.

So, to defend NATO’s right to expand to Ukraine and Ukraine’s right to join NATO, ordinary Europeans and Americans would have to see a drastic jump in their energy bills. Does President Macron want that before the French presidential elections in April? Does President Biden want Americans to trust him even less on his ability to manage the economy and make sure the Republicans take the House and the Senate in the December 2022 mid-term elections? Putin probably gambles that they do not.

But President Biden has promised such sanctions, in case Putin invades Russia. Putin does not gain by forcing his hand. It would make more sense to station Russian forces in the breakaway Republics of Luhansk and Donetsk and threaten to annex the Donbas region dominated by Russian speakers, an act of aggression that would not invite extreme sanctions and yet harm Ukraine. Ukraine might feel pressured by such Russian moves, not to speak of its western allies, to unilaterally disown any plan to join NATO, should Russia offer it security guarantees against further aggression.

Finland served as a buffer between the Soviet Union and NATO for decades, and was none the worse for it, being able to integrate with the liberal democracy and welfare capitalism of the west without playing host to NATO forces on its soil. So, too, would Ukraine, in all probability.

Retaining Russia as an independent center of global power is better for the world at large, as compared to domination by two superpowers, the US and China. A multipolar world offers greater scope for maneuver for a country like India that seeks strategic autonomy in the global arena. That does not exonerate Putin of the charge of despotism within Russia and cyberbullying outside, nor make India a party to such behavior. If a fickle US and a domineering Russia force Europe to find its own geopolitical voice and create its own strategic capability outside NATO but still collaborating with it, that would suit India even better.