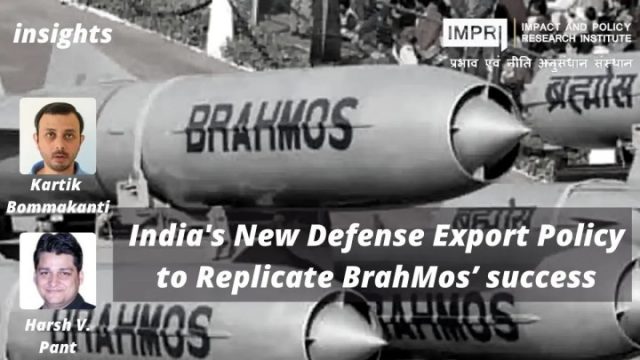 India’s defense exports have received a substantial boost with the recent sale of the naval variant of the BrahMos supersonic cruise missile to the Philippines. Exporting this cruise missile, which is a joint venture (JV) between India and Russia with 70 percent indigenous input from India, is a significant milestone for Indian defense manufacturing.

It is also significant that this sale to a key Southeast Asian country comes amidst considerable strategic churn in the Indo-Pacific.

It is driven as much by a strategic rationale as it is by commercial gains with the People’s Republic of China (PRC) looming large in this purchase by the Philippines. Both Manila and Beijing claim islands in the South China Sea (SCS). Beijing has militarised Woody Island, has been in a stand-off over the Scarborough Shoal with Manila and arbitrarily claimed the Nine-Dash Line (NDL) which is a U-shaped line that Beijing believes is indisputable.

The NDL covers 90 percent of the waters in the SCS. Although there are multiple claimants to islands in the SCS, which is rich in fishing resources and energy reserves, the Philippines has doggedly confronted the PRC among all Southeast Asian countries.

The PRC’s assertiveness over islands in the SCS and its efforts to constrain the Philippines naval missions and commercial shipping activity coupled with competing maritime claims over the islands explain Manila’s decision to upgrade its defence capabilities.

Manila took the PRC over its maritime claims to the International Court of Arbitration at the Hague. Despite the International Court of Arbitration ruling in favor of the Philippines in 2016 under the United Nations Convention on the Laws of the Seas, China rejected the court’s directives and jurisdiction, reflecting how international law is only customary and when confronted with the exercise of power by major states hardly has any effectiveness.

The PRC’s assertiveness over islands in the SCS and its efforts to constrain the Philippines naval missions and commercial shipping activity coupled with competing maritime claims over the islands explain Manila’s decision to upgrade its defense capabilities.

The BrahMos contract is worth $375 million. India will be supplying three batteries of the shore-based anti-ship BrahMos missiles to the Philippine navy with the possibility of an additional order for the Philippines army for $300 million.

India’s defense export policy did help in accelerating and convincing Manila about the merits of purchasing the BrahMos. Coordination between India’s envoy to the Philippines and the former chief executive officer of BrahMos Aerospace Corporation led to Manila’s decision to place the order.

The successful sale of the BrahMos lies in the fact that India’s research and development (R&D) and domestic manufacturing capacity have contributed significantly to improving the missile, though it had to take Moscow’s consent before the sale could proceed.

That apart, variants of the cruise missile are used across the service branches of the Indian military. This reflects considerable confidence in the performance of the missile, which has not gone unnoticed by external buyers such as the Philippines, but also potential buyers as is evidently the case with Indonesia.

In addition to BrahMos, India’s Hindustan Aeronautics Limited (HAL) has also developed the Advanced Light Helicopter (ALH), which is now under orders from Mauritius. Variants of the ALH are used by the Indian Army (IA), the Indian Navy, and Coast Guard, making it exportable.

The successful sale of the BrahMos lies in the fact that India’s research and development (R&D) and domestic manufacturing capacity have contributed significantly to improving the missile, though it had to take Moscow’s consent before the sale could proceed.

For a long India has been— and still remains— one of the world’s largest weapons importers. With these recent export successes, New Delhi stands on the cusp of starting to export greater volumes of defense hardware.

According to the Ministry of Defence (MoD), India exported Rs 1,940 crore worth of defense equipment in 2014-15. In 2020-21, New Delhi’s defense exports were at Rs 8,434 crore. These military exports consist of protective gear for military personnel, mechanical engineering equipment, and defense electronics. The MoD under the Narendra Modi government has set an ambitious defense export target of $5 billion by 2024.

Notwithstanding the success of the BrahMos, ALH, and other military equipment over the last few years, the same cannot be said of the Tejas Light Combat Aircraft (LCA) or the Arjun Main Battle Tank (MBT). Despite the delivery of Arjun MBTs to the IA under instructions from the Government of India (GoI) and the IAF’s procurement of 83 Tejas aircraft, again under GoI directives, these weapons platforms have yet to gain complete acceptance by the IA and the IAF.

Absent significant commitment to a procurement program by the Indian services for indigenously developed military hardware, the traction we witness today with defense exports will wither away. Prospective external buyers will remain unenthusiastic about purchasing Indian weapons systems if it becomes visible that the Indian armed forces are tepid in inducting domestically-built hardware and do not intend to operate indigenous hardware for a sustained period of time.

Absent significant commitment to a procurement program by the Indian services for indigenously developed military hardware, the traction we witness today with defense exports will wither away.

For a successful and sustainable defense export policy, India needs a multitude of stakeholders, encompassing the civilian leadership cutting across ideological lines, and across governments, the armed forces, R&D agencies, and domestic manufacturers, working cohesively together. Without this, New Delhi’s ambitions will still be confined to exporting mostly sub-systems and spares, notwithstanding its success with the BrahMos and the ALH.

Kartik Bommakanti is a Fellow with the Strategic Studies Programme, ORF