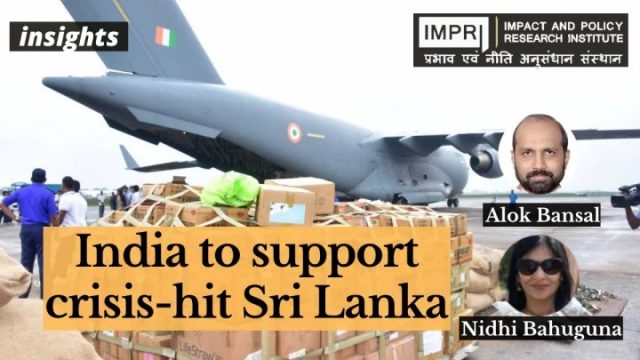 A truck driver in Sri Lanka died after waiting in a queue at the filling station for five days. This was the tenth such death. Prime Minister Ranil Wickremesinghe has already accepted that the economy has collapsed and the country is unable to buy oil. The government offices and schools are already closed from Monday, June 19, in view of the acute fuel shortage. The country is also facing acute food shortage and according to Wickremesinghe, around 20% of its population is going to be affected by food shortages.

The Sri Lankan Army is cultivating barren land to grow food crops and government employees are being given leave to undertake farming. The government has been in talks with the IMF to borrow at least $3 billion via the lender’s extended fund facility (EFF) in order to ameliorate the sufferings of its citizens and pull the country out of the economic morass that it finds itself in.

The world has been watching with dismay at the unbelievable pictures that have been emerging out of Sri Lanka for the past three months, with Mahinda Rajapaksa’s house being set on fire by mobs. The leader, who was credited with winning the civil war and had won a thumping majority in Sri Lanka’s 2020 parliamentary elections, winning almost 60% votes and two-third seats, was forced to resign and take shelter in a naval base. The island nation had its foreign exchange reserves depleted and had defaulted on debt servicing, which made it almost impossible for it to import either fuel or food leading to power cuts extending up to 15 hours a day, severe food shortage and a collapsed economy.

It is essential to understand how Sri Lanka, a country with the best Human Development Index in South Asia, and with a per capita income 50% higher than India, came to such a state.

From 1983 to 2009, Sri Lanka was engulfed in a vicious civil war, which ended under the leadership of President Mahinda Rajapaksa when Sri Lankan forces trounced LTTE on May 16, 2009. This resulted in a ground swell of support for Rajapaksa, as he had won a war, which most Sri Lankans perceived as unwinnable. There was an economic boom after the war, with Sri Lanka doubling its income from 2005 to 2011. The main contributors to the economy being tourism, tea, rubber and apparels.

This resulted in Rajapaksas (Mahinda and his family) consolidating their hold on the country and splurging money on mega infrastructure projects, which were economically unviable. This resulted in huge borrowings and by the time the Rajapaksas were ousted in 2015, the debt was already 80% of the GDP. In 2016, the IMF bailed out Sri Lanka. However, the return of the Rajapaksas in 2019 did not augur well for the Sri Lankan economy. Certain developments, both of their own making as well as those beyond their control, local as well as international, resulted in economic catastrophe.

Tourism, one of the major foreign exchange earners, was hit by Easter Bombings of April 21, 2019. Before the industry could recover, the globe was in the lockdown phase because of Covid-19. To compound Sri Lanka’s woes, Sri Lanka decided to completely switch to organic farming, a laudable objective, which unfortunately proved catastrophic. In April 2021, the use of non-organic fertilisers and pesticides was banned. This impacted the entire agricultural sector, with yields dropping drastically. Rice production fell 20%, tea exports declined by 60%, rubber, coconut, virtually all crops failed across the nation, which resulted in rising food prices and widening trade deficit.

Faced with fast depleting foreign exchange reserves, President Gotabaya Rajapaksa declared an economic emergency in September 2021, curtailing imports. This impacted the largest foreign exchange earner — the apparel industry, which is dependent on imports for virtually all its ingredients. Consequently, the exports dried up, aggravating the problems. On April 12, 2022, Sri Lanka defaulted on its debt obligations; consequently, no money was available to procure crude or other petroleum products, resulting in long power cuts and long queues for fuel. That sounded the death knell for whatever tourism had survived.

The food and fuel shortages, devalued currency, galloping inflation and power shortages led to an angry outburst against the government, which was dominated by the members of Rajapaksa family. The resultant violence forced Prime Minister Mahinda Rajapaksa to resign. Large number of ruling party members also resigned from the party. With the Opposition leader unwilling to shoulder the responsibility, the experienced former Prime Minister Ranil Wickremesinghe was sworn in as Prime Minister again. In his inaugural address on May 16, he described the nation’s finances as “extremely precarious”. He further warned that the nation had only one-day worth of fuel supplies left and the power shortages would increase.

Instability of this sort, especially in a country which has grave ethnic and religious faultlines can easily be exploited by any external powers. For India, stability in Sri Lanka is extremely important. The people of the two countries are connected by cultural, historical and religious linkages and these linkages go back to the earliest times and disappear in the mists of history. Sri Lanka is India’s largest trading partner in SAARC.

India is among the largest investors in Sri Lanka. Largest number of visitors to Sri Lanka are Indians; and, Sri Lankan nationals of all ethnicities and religions strive to come to India for not only their health and educational needs, but also for spiritual solace. Strategically, Sri Lanka is critical to New Delhi’s Indian Ocean strategy and for countering external influence in India’s neighbourhood.

Unfortunately, despite Indian generosity of providing $500 million to Sri Lanka for importing fuel and providing food, medicines as well as other essential items, it has not been able to ameliorate Sri Lanka’s suffering. The primary reason has been that despite its proximity, India does not have overland connectivity with Sri Lanka. Ideally, India should have a land bridge to Sri Lanka with oil and gas pipelines and connectivity between the two electricity grids. Had transport services across the Palk Strait existed, the situation would not have come to the present critical pass, because India could have provided fuel, food and electricity, much before the situation worsened.

Both the countries are part of SAARC and BIMSTEC, but no attempt was made to create an overland connectivity, although just six decades ago, the two countries had train links, till the destruction of railway terminus at Dhanushkodi in the 1964 cyclone. It is therefore essential that the ancient ‘Ram Setu’ is rebuilt so as to re-establish the historical connectivity between the two countries. This would enhance trade and tourism significantly.

Large sections of society in both the countries wish to go for pilgrimage to the other country, but are not able to afford the air travel. The bridge will enable them to fulfil their aspirations. More significantly, it will enable the two countries to ameliorate each other’s sufferings, in times of crisis like this. There are projects to link Jaffna by air to Trichy, and start ferry services from Karaikal to Sri Lanka. However, their ability to meet the requirements in times of crisis like this, are limited.

This article was first published in News18 as Time to Rebuild Ram Setu to Ameliorate Sri Lanka’s Sufferings, Establish Historical Connect with India on 26 June 2022.