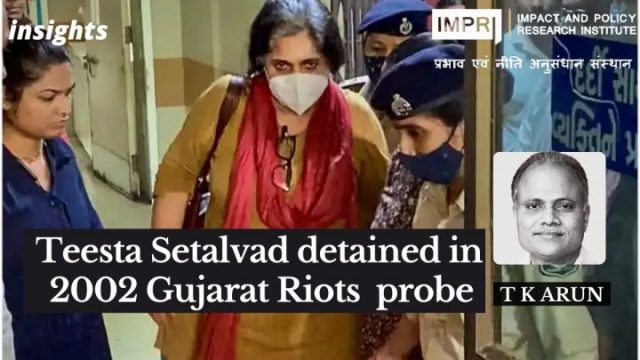 Whether there is merit to the police charge of faking evidence in the 2002 riots case, made against Teesta Setalvad and two former officers of the Indian Police Service of the Gujarat cadre, will be determined by the judicial process, over time. However, the political impact of the police action is immediate, and wholly counterproductive — both for India as a nation and for Narendra Modi, who, as India’s Prime Minister, would be attending an assorted gathering of heads of state.

How the detention of activist Teesta Setalvad, and arrest of retired Director General of Police, RB Sreekumar, affects Prime Minister Modi is straightforward. America and its allies need India as a counterweight to China in Asia. At the same time, countries are sought to be rallied against China in the name of democracy and freedom.

Developments in India, such as ‘bulldozer politics’ in which residences of those protesting against the government are demolished first and justifications mustered later, vitiate India’s democratic credentials and make it difficult for the US and its allies to embrace India as an ally in a common battle to defend freedom and the rule of law.

US Secretary of State Anthony Blinken officially raised concerns about religious freedom in India. Arab and some other Muslim nations joined a chorus of condemnation, in the wake of comments against the Prophet by BJP spokespersons. US Congresswoman Ilhan Omar has moved a resolution seeking India’s labelling as a country of particular concern, with regard to religious freedom, and the resolution has been co-sponsored by two other members of the House of Representatives.

In this background, the Supreme Court’s dismissal of the petition alleging a larger design implicating the head of the government behind the 2002 Gujarat riots would have come across as vindication for Modi. The action against Setalvad and others alters the picture from vindication to vindictiveness.

How does the crackdown against Setalvad impact India as a nation? Teesta Setalvad is someone who has diligently used the institutions of Indian democracy to bring rioters to book. She would be viewed by a member of the global jihad as an agent of the Indian state, I had argued in an article written seven years ago. She tirelessly worked to ensure that the Gujarat riot prosecutions did not suffer the fate that has befallen most riot cases in India: collapse after prolonged procrastination, in which witnesses turn hostile, evidence is destroyed and prosecutorial measures corrupted. As many as 184 people were found guilty by the courts, including a minister in the state council of ministers.

Setalvad established that the Indian state is capable of delivering justice to Muslims, that it is not institutionally biased against the minorities, as Jihadists would argue. Jihadists seek to mobilise all Muslims of the world into a single community (Umma) that stands against all infidels and oppose the very notion that Muslims would get fair treatment in non-Sharia jurisprudence. People like Setalvad are seen as roadblocks to mobilising Muslims into a global jihad, deluding them into thinking that democracies offer a path to justice, however flawed.

Instead of recognising Setalvad’s contribution to the legitimacy of the Indian state in the eyes of minority communities constantly being urged to abandon notions of possible fairness outside an Islamic state, the Indian state is going after her. That delegitimises the Indian state and legtimises Jihadi propaganda.

In a democracy, people expect to live with dignity and in harmony with other people, regardless of group identities. When experience defies this expectation, and the majority get privileged treatment and minority rights get bulldozed, the minorities have three courses open to them.

They can work the institutional remedies offered by the democratic state system, such as the courts, the media, human rights commissions and so on. They can hope to use political means, to remove from office political forces that work against them, and install in office politicians who observe democratic norms. If both these options fail, what remains is what Clausewitz called “the advancement of politics by other means”.

India does not want to go down the Sri Lankan path. Lanka’s 15 per cent minority, the Tamils, were victims of the politics of Sinhalese chauvinism. The Tamil language ceased to be an official language. Tamils were systematically removed from their traditional roles in the state and society. Active discrimination and oppression of Tamils began. Then, the Tamils took up arms and spawned multiple, insurgent armies that sucked Sri Lanka into a devastating whirlpool of death and destruction. Sri Lanka lost three decades of growth, before the rebellion was crushed.

The wounds fester.  Part of the blame for the crisis that the country finds itself in today, belongs to the Sinhala-Buddhist chauvinism that denied the country’s largest minority its constitutionally guaranteed democratic rights.

This is not a path, down which India wants to be dragged. Actions like the bulldozing of protesters’ homes and police action against Teesta Setalvad push India in the direction of schism and loss. Hewing close to democratic norms would make India a champion of the democratic rights the world needs.

This article was first published in The Federal as Teesta Setalvad’s detention: The perils of choosing vindictiveness on 26 June 2022.