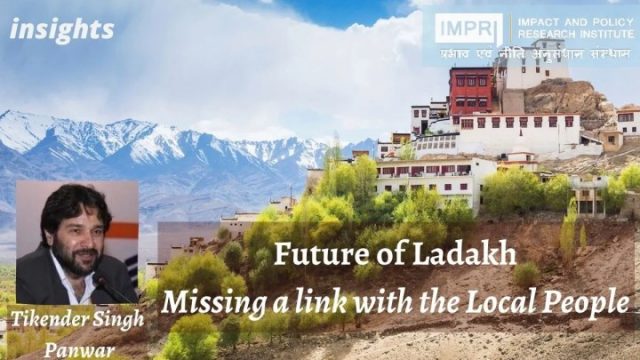 ‘The lieutenant governor’s office of Ladakh is just like Pangong lake’s water, which can neither be drunk nor put to any use’. This is a general comment on every native’s lips in the Ladakh region. The region, since it was turned into a union territory after the abrogation of Article 370 had built high hopes of development owing to its direct connection with New Delhi.

However, if nearly three years of the period are taken into consideration, there have been dissensions, resentment brewing at a rapid pace and people fearing that someone else is pulling their strings of development, instead of themselves.

The respective budgets of these hill councils are nearly Rs 300 crore annually, whereas the UT administration budget is Rs 5,958 crore.

This entire budget is not under democratic control but under a few bureaucrats who are running the show. And as a recent visit of the author to the region and interaction with the local population substantiates the point that there is hardly any interface between the bureaucrats and the people. Neither the elected nor the common people are part of the developmental processes.

It is in this background that this saying emerged in Ladakh about the lieutenant governor of Pangong lake. The LG is approachable but does not perform a bit when it comes to settling the demands of the people.

The second major issue that has crept in the recent period is the issue of land and particularly ‘Nau Taur’ land. It was practised during the J&K period even before independence. Naur Taur simply means breaking new land, mainly barren and wasteland for cultivation. As the Raja wanted more revenue hence new land and its settlement was allowed in the entire J&K, unlike Himachal Pradesh, where this law was implemented to allocate land to the landless, in J&K it was liberally used by the people to cultivate the land and in a few years through the settlement of land records, Naur Taur land would be mutated in the name of such occupiers of land.

Now in a recent order in April 2022, by the revenue secretary/commissioner of Ladakh UT, the Nau Taur land has been questioned and if the purpose of the land has changed, say for example from agriculture to commercial, which has happened widely (conversion of land from agriculture to hospitality, etc.), then there is a threat that such land can vest with the State. The office order terms this practice as nefarious. Also, the new mutations of Nau Taur land will be done by the deputy commissioner and not the tehsildar. This is also creating much discontent amongst the local people owing to the long distance that the people might have to travel to get such mutations confirmed.

The people had high hopes that the entire region will be declared tribal under Schedule VI of the Indian Constitution. However, the government is yet to decide in this regard. It is felt that the Union government deliberately does not want to announce this status owing to land rights accruing out of such a status once granted. Take, for example, harnessing solar power energy from the region it is estimated to have almost 300 days of clear sky and very high photovoltaic strength. This can get converted into solar power energy.

Already big giants in the solar power industry are contemplating harnessing this energy. If the tribal status is guaranteed, the local people become one of the most important stakeholders in the exercise. Minus that, it is just the government to government or a private player that will be material.

Given this background, it is seen that large swathes of land across the road leading from Leh to Kargil find boundaries being drawn along the land with stones etc. On asking what this signifies, the author was told that the local people have started encroaching on the village common land, doubting the UT administration, that they would hand it over to outsiders for various reasons.

The disconnect between the people and the UT administration is quite stark.

The fourth important issue is the perniciousness of this nexus. Eyeing the large share of the UT administration in the region, large consultants in the development sector have already ventured. Big names are part of the PMU (Project Monitoring Unit) and guide the UT administration with a complete project-oriented approach instead of a holistic and comprehensive one. No wonder a good share of consultancy is usurped by them.

Local level planning in designing their mobility, infrastructure or even industry is hardly seen. The people are completely out of the box, and soon these reports would be worthless as they do not evolve from the due process of people’s participation.

Take, for example, a simple phenomenon of tourism-related development. This year nearly 8 lakh tourists are estimated to visit Leh. This is many times the population of the town (31,000). Almost three times the population of the entire region. How to make tourism sustainable, less polluting, sync with climate change, and sustainable development goals is not even being discussed.

The blind rush for land use change from agriculture, particularly urban agriculture, to hospitality can be a big disaster shortly. Just to cite one example. Because of this shift already, 90 per cent of the water sources have got polluted in Leh town, owing to non-comprehensive tourism and urban development plan. The shift from dry toilets to flush is one of the major reasons.

Lastly, the contradiction being deliberately brewed between Shia Muslim populated Kargil and Buddhists populated Leh regions by a certain section of the clergy who are hand in glove with the ruling establishment can have perilous and non-resolving impacts on the people and the regions for too long. The people have stood together, have a common culture, and have lived long with fraternal bonds. The exercise of the ruling coterie to build fissures in these regions can be detrimental to everyone. A recent march from Leh to Kargil by one section was planned in this direction, though put on hold for the moment.

The regions of Leh and Kargil, known for their scenic beauty, are demanding urgent attention, and resolving the issues, pending for a long period, could be perilous for both its people and the establishment.

First published in NEWS CLick as ‘Ladakh, act now Before it’s too Late‘ on July 27th 2022.