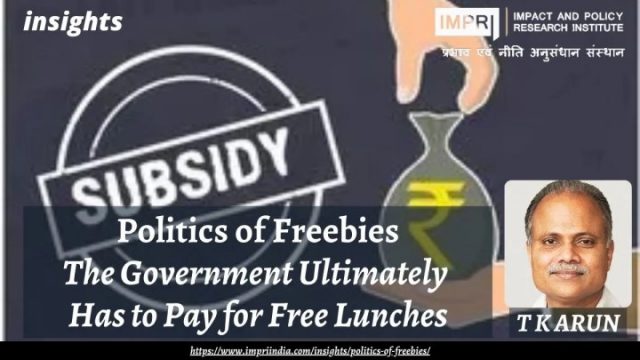 On July 16, Prime Minister Narendra Modi mocked the freebie culture, comparing it the distribution of revdi, a North Indian sweet made of sesame (til). On July 26, the Supreme Court also seized on the dangers of politics by freebies. It is essential to understand this threat to democracy now glaringly visible to everyone who could, presumably, also see the emperor’s new clothes till that pesky little urchin loudly opted out of the charade.

In a 2020 paper, Sudipto Mundle and Satadru Sikdar estimated that the explicit subsidy burden on Union and state budgets has come down from 1987-88 to 2015-16, from 12.9 percent of GDP to 10.28 percent of GDP. But this estimate excluded “subsidy-like components, such as direct income transfers, for instance, the Mahatma Gandhi National Rural Employment Guarantee Act or the Pradhan Mantri Kisan Samman Nidhi, concessional interest rates, concessional pricing of land or other assets sold by the government and tax exemptions or concessions, otherwise known as tax expenditures.”

The point to appreciate is that what constitutes a subsidy lies, like beauty, in the eye of the beholder, to some extent. Deciding what is a merit subsidy is even more arbitrary.

Merit and non-merit subsidies are bits of jargon that are now in vogue, thanks to the discourse on freebies. Conceptually, things are straightforward. A merit good is something that benefits not just its consumer, but others as well — it has a positive externality, in other words. Since consumers take into account and pay for only their own direct utility of a good, its price is below what it would be, if its benefit to society at large were to be considered.

This low price, in turn, induces a lower supply from the good’s producers than if the price had fully reflected its total utility. Therefore, it makes sense for the government to top up what consumers pay, with a subsidy, so as to enhance the supply, and maximise collective benefit.

Literacy and numeracy benefit those who acquire it. But these also benefit society at large, too. An educated workforce will attract more investment, produce more innovation, and achieve higher productivity for the economy as a whole. So, primary education is uniformly viewed as a merit good. So is vaccination.

Mundle and Sikdar considered only food, primary and secondary education, health and water supply, and sanitation as merit goods. Are old-age pensions a merit subsidy? Is money going to a widow in her late sixties abandoned by her children and struggling to eke out a living something that benefits society at large, or so much revdi?

Singapore and Hong Kong, neither suspected of being run by socialists foaming at the mouth because of their radical zeal, provide public housing. Many rich-world cities have hit upon buying the poor homes as the surest way to rid the streets of hobos and drug-peddlers, and nudge people off welfare, and into jobs.

What is a merit subsidy also depends on your assessment of the normative relationship between the State and the citizen, and among citizens.

What an industrialist sees as a legitimate incentive to invest could, to a trade union leader, look like a subsidy to the rich. Under-priced suburban rail fares might seem like a dole to the commuter, but an economist could detect in them a subsidy to the city’s employers, whose wage bill would otherwise have had to cover their workers’ higher travel cost.

Does this mean almost any subsidy can be justified as having a positive effect on society at large, rather than just to the direct beneficiary? The answer lies in the aggregates.

Freebies are misnamed. Someone has to pick up the tab: society at large, in the present and in the future. It is common to find the middle-class gentry gripe about paying taxes, and getting little in return. They assume that they are the only ones paying tax, while those below the income-tax threshold just receive benefits.

In India, only about a third of the taxes collected by the Centre and the states are from direct taxes. The bulk of tax receipts are from indirect taxes. Everyone pays indirect taxes, including the poor — that tax is built into the price of that box of matches or now, a pouch of milk or dahi. These taxes are indirect because the tax is borne by someone other than the one on whom the government levies it. They are regressive — the tax paid on a box of matches, as a proportion of the taxpayer’s income, is much higher for a cobbler than for a CEO. In contrast, with income tax, those with low incomes pay a lower rate of tax.

So, grumpy income-tax payers should tone down their complaints, and look for greater clarity on where exactly the shoe pinches.

The shoe pinches when the exchequer cannot finance the subsidies the politicians want to dole out and voters lap up, and that results in excessive borrowing, leading to inflation in the present and a large debt burden for future generations to service. High inflation in the present would depress investment, growth, job creation, and escape from poverty.

This article was first published at Money Control as Freebie Politics | Enlightenment is when the polity realises that there are no free lunches.

Read another article by TK Arun- Morally Condescending West should roll back food sanctions on Russia in IMPRI insights.