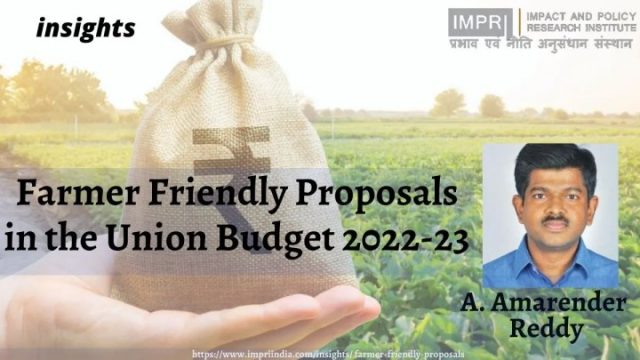 THE upcoming Union Budget offers a good opportunity to build trust between the government and the farmers. Many farmers are facing three age-old problems — low prices, low yields, and low income. Successive governments are trying to address these issues, but still, a lot needs to be done. For example, farmers are still selling their produce below the Minimum Support Price (MSP). The average productivity of crops such as pulses and oilseeds is still less than 1.5 tonne/hectare and the recent farmers’ situation assessment survey indicated that their average income did not even cross Rs 10,000 per month. Although ongoing government schemes are in the right direction, these need fine-tuning for visible impact. Some changes can be considered in the Budget.

To solve the problem of low farm harvest prices, the government has to strengthen the agricultural market infrastructure. In recent years, governments have been promoting 10,000 farmer producer organizations (FPOs), setting up the Agri Market Infrastructure Fund (AMIF) for the upgrade of infrastructure in the existing 22,000 rural haats and transforming them into Gramin agricultural markets (GrAM), and strengthening infrastructure in APMC markets and establishing e-National Agriculture Markets. However, even after so much emphasis, many of the APMC markets and rural haats are not in a condition to meet the farmers’ marketing needs. The government should ensure better implementation and pump in more investments.

GrAMs have the potential to evolve as effective farmer-consumer direct markets and can also act as collection and aggregation centers to further link up with mega food retailers and exporters. However, under the existing guidelines, only village panchayats/cooperatives/APMCs are eligible to take up village haats’ upgrade activities under AMIF.

Although the government intended to give a greater role to the public sector is understandable, it is time to bring in private companies in the profit-sharing mode, which are specialized in doing these types of works more efficiently at least in the day-to-day maintenance of warehouses, cold chains, etc. It will not only increase the utilization rate of newly created infrastructure but also generate income for the government, which can be used for proper maintenance of other basic infrastructure within the GrAMs yards such as pathways, boundary walls, etc. Similarly, private sector participation needs to be encouraged in the creation and maintenance of infrastructure in APMC markets.

This form of discrimination is an injustice to the farmers who are unable to get loans from formal institutions but end up taking them from microfinance institutions, as they provide easy access to credit on an urgent basis with little documentation. Amid the Covid pandemic, microfinance institutions played a greater role in expanding credit to the marginalized population and tenant farmers in rural areas. This needs to be encouraged by expanding the interest subsidy scheme.

PM-KISAN (income support scheme for farmers) was announced in the 2019-20 Union Budget with a support of Rs 6,000 per year for each eligible farmer-household. The success of the scheme is visible in terms of its sheer reach. Of the total 11.9 crore identified eligible farmers, 11.7 crores were benefited through direct money transfer into their accounts in 2021-22. However, one major complaint by the farmers is that the amount is not increasing every year to compensate for the increased costs of agricultural inputs such as fertilizers and seeds. Probably, in this Budget, the government should link PM-KISAN assistance to the agricultural input price index (main fertilizer).

Pradhan Mantri Fasal Bima Yojana provides insurance whenever crop failure occurs. In recent years, some states have opted out of the scheme in spite of significant Central subsidies. As a result, area coverage under crop insurance reduced from 30% of the Gross Cropped Area (GCA) in 2016-17 to 25% in 2019-20. A major problem is a delay in claims settlement due to reasons such as pending state subsidy and/or pending yield data; as a result, farmers are losing interest. Some claims are also pending due to issues such as payment failure, yield-related disputes between private companies and state governments, etc.

In the coming years, with increased volatility in yields due to climate change, crop insurance will play a critical role in stabilizing the farmers’ income. Hence, there is a need to impose strict penalties for any delay in claims settlements by private companies.

Effective crop diversification will solve multiple problems simultaneously in Indian agriculture: reduce high-cost, excessive food stocks with FCI; increase exports and reduce imports; higher production of pulses and oilseeds will reduce prices and consumption, and help in reducing environmental damage caused by monocropping of paddy-wheat. However, the crop diversification strategies of the government are scattered. There is a need to consolidate and create a separate fund for the promotion of diversification from paddy and wheat to crops such as oilseeds, pulses, fruits, and vegetables.

Funds under crop-oriented schemes such as the National Mission on Edible Oils, Accelerated Pulses Production Programme, and Mission for Integrated Development of Horticulture, which are aimed at increasing area under respective crops, need to be pooled under an integrated Mission for Crop Diversification. One of the ways to increase crop diversification is publicizing a bonus on PM-KISAN for the farmers who shifted from paddy-wheat crop cycle to government-suggested crops based on agroecology and market research.

Overall, it’s time to consolidate already existing schemes but with a focus on increased funding and better implementation strategies. This will, in turn, help in achieving the national objective of increasing farmers’ income.

The article was first published in The Tribune Union Budget: Build trust through farmer-friendly proposals on 24 January 2022.

Read more by the author on price insurance policy titled Why a Price Insurance Policy makes Sense in IMPRI insights.