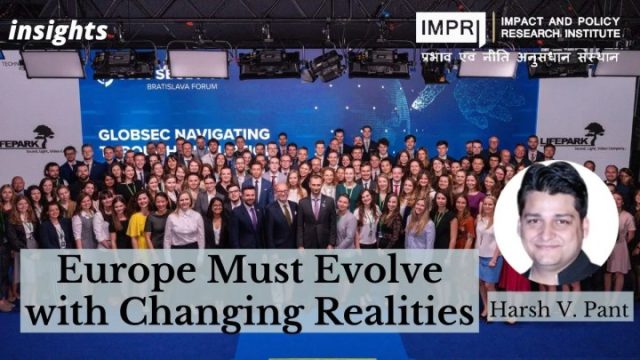 Speaking at the GLOBSEC Forum in Slovakia’s Bratislava, external affairs minister S. Jaishankar argued that Europe has to grow out of the mindset that its problems are the world’s problems but the world’s problems are not Europe’s. This strong pushback by the minister came amid persistent efforts by European countries to convince India to take a tougher stance vis-a-vis Russia on its invasion of Ukraine with the suggestion that New Delhi could face similar challenges from China in the future. The minister underscored how Europe has often done more to sustain Russian war efforts.

This is the reality that Europe faces today as it tries to address one of the most seminal challenge in its recent history. After proclaiming for decades that the EU was not in the business of geopolitics, the reality is dawning in Europe that it can ignore power politics only at its own peril. The Russian invasion of Ukraine has brought this to the fore. In response, Europe has moved ahead with a remarkable shift in its foreign and security policy posture that would have been unthinkable just a few months back. Russia has been relying on EU disunity.

But, faced with one of the most significant challenges since the end of the Cold War, the EU has come together to impose sanctions on Russia’s financial sector, ban Russian state media and deliver weaponry to Ukraine. Even Switzerland, the forever neutral state, has decided to freeze assets belonging to Russian President Vladimir Putin, Prime Minister Mikhail Mishustin and foreign minister Sergey Lavrov, as well as key Russian oligarchs. The EU, in a show of defiance, also decided to move ahead on Ukraine’s membership talks upon receipt of a formal application. And despite their longstanding commitment to neutral policies, Finland and Sweden have reassessed their positions with applications for Nato membership last month.

The most striking development, however, has happened in Germany, which decided to significantly increase its defence spending, having recognized the unsustainability of its reliance on American security guarantees. Germany will boost its military spend above 2% of gross domestic product and commit €100 billion to its armed services. In a major shift from its post-World War II policy, it has removed some restrictions on German-made weapons being sent to conflict zones, thereby enabling more third-party countries to send weapons to Ukraine as well. This is despite Germany’s heavy dependence on Russian gas. The unmistakable message is that history is back in Europe.

But as the Ukraine war grinds on and is seen to be turning into a long war of attrition, there are questions about how long Europe’s resolve on Ukraine will last. Its internal differences are striking. The UK, Poland and Baltic countries have talked of categorical Russian defeat and the need to drive it out of Ukraine, even as leaders in France, Germany and Italy have been more circumspect. French President Emmanuel Macron, has called for a ceasefire between Russia and Ukraine and urged the West not to “give in to the temptation of humiliation, nor the spirit of revenge.”

German Chancellor Olaf Scholz has engaged Putin to explore ways to enable Ukraine to export grain through the Black Sea. The road to a partial EU embargo on Russian oil has been long and tortuous. While the EU has decided to block most Russian oil imports by the end of 2022, this ban will impact two-thirds of oil imports by sea but not pipeline oil after Hungary opposed it publicly. Hungary imports 65% of its oil from Russia through pipelines. This was the EU’s sixth set of sanctions against Russia since the start of the conflict on 24 February and it was very difficult to negotiate.

To many, these divisions remain Putin’s strongest weapon in the long term. His invasion may have assumed that Europe and the wider West would shy away from a fight. In the initial phase, he was proven wrong, as it gave Nato a new lease of life and sense of purpose. But as the war drags on and the costs continue to impact Europe, he would be hoping that Western solidarity comes apart. This was highlighted by US Director of National Intelligence Avril Haines when she suggested last month that Putin “is probably counting on US and EU resolve to weaken as food shortages, inflation and energy prices get worse.”

Putin is aware of these divisions within the EU and will try to exploit them as he reconfigures his war strategy. So far, he has had limited success on the battlefield, and instead of weakening the European resolve, his actions have only strengthened it. But, as this war of attrition continues, the appetite in the West to keep up the sacrifices needed to sustain support for Ukraine will come under stress. And Putin will surely seek to exploit this vulnerability. He has confidently asserted that the West would not be able to cut itself off from Russian oil and gas for several years.

For Europe, these challenges are going to get much tougher as the costs of supporting Ukraine will continue to rise. Instead of gratuitous advice to other nations on how their foreign policies should be conducted, it will have to work out its own policy choices and ensure that it remains true to the vision of a liberal world order.

The world is changing rapidly and Europe too has had to evolve accordingly. The old “empire of norms” is trying to find its footing in a global environment that is being redefined by new geopolitical contestation and jostling. Europe is no longer the centre of gravity of global politics, and this necessitates a change in the way European policymakers engage with the wider world.

This article was first published in The Mint as Europe’s slow adaptation to a rapidly changing world on 13 June 2022.