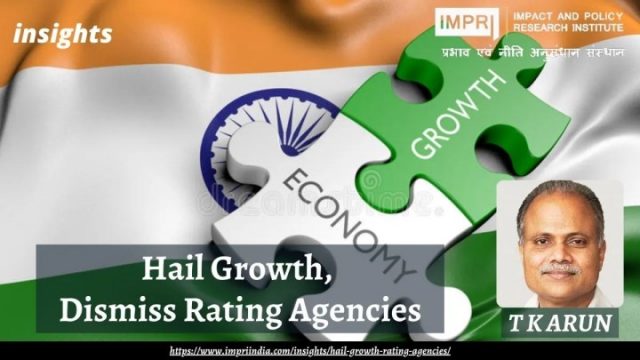 The World Bank has forecast slower world growth, for the current year and the next, at 2.9% and 3%, respectively. Emerging markets and developing economies, which normally gallop ahead of the rest of the world, are expected to grow at just 3.4% this year, with Covid- and zero-Covid-afflicted China growing at a rate slower than the US for the first time in 40 years or so. Does this cripple India’s chance of growing at least at 7%? It does not, and not because the World Bank pegs India’s growth rate at 7.5%, higher than the Reserve Bank of India‘s own estimate of 7.2%.

Growth is returning to domestic services, the kind economists call contact-intensive. Barbers, doctors, restaurants and malls offer contact-intensive services. Banking and telecom are examples of the contact-light ones. Oh, add government services to the latter group, even if many could be disconcerted to know that what the government does is called service.

Global information technology services are on a roll, never mind the plight of tech companies on the stock market. Zoom might no longer be so hot, with work-from-home having saturated. But every company worth its salt is gritting its teeth and climbing on to the cloud. That is why Broadcom could make this record offer of $61 billion for cloud software-maker VMware. When companies migrate to the cloud, there is usually an Indian IT service company holding its hand and easing the ascent.

Indian IT and IT-enabled services (ITeS) companies are hiring like mad, trying to stem attrition with anti-competitive policies such as barring moving to a competitor and upskilling internal staff. This kind of hiring, with enhanced remuneration to boot, puts purchasing power in the hands of a lot of young people, who want to buy homes, furniture for their homes, electronic gadgets, fine dining, the works. Their spending creates jobs and incomes in the non-IT parts of the economy. Real estate is finally finding its feet, after being knocked out near cold these past few years of stagnant sales, deep discounts and extinction of the least fit among their tribe.

JSW and  Grasim moving into paints, and Adani’s aggressive foray into cement, to be met by aggressive expansion plans by Grasim, through

UltraTech, are signs of the expected boom in construction – of real estate and other infrastructure. GoI is not doing itself, or the steel and iron ore sectors, any service by taxing exports and preventing these segments from mobilising the wherewithal for new investment in capacity expansion.

Action by GoI on two other fronts is crucial as well, to sustain the gathering growth momentum. One is energy, the other is social peace.

A functional market for energy is a key tool for minimising inflation/shortage. Holding power tariffs down for the sake of political expedience has had the result of distribution utilities not paying power generation plants for the power they purchase, and building up unviable dues. State governments are being forced to take over these loans once again, after the Ujwal Discom Assurance Yojana (UDAY) proved to be a false dawn, distribution utilities don’t buy or distribute enough power, and the economy ends up with the costliest kind of power in the world: no power.

Power Bill to the People

When retail prices are repressed, it affects the market along the chain. If domestic coal is in short supply, it is not possible to substitute it with more expensive imports, for example, even if regulation permits it.

The government and the political leadership must make it clear that free or subsidised power and patronage of power theft are anti-people, growth-killing shortcuts to popularity. The poor must be given cash transfers to pay for the power they consume, the utilities set free to function optimally.

Social peace is vital, not only to prevent investment- and export-blocking global opprobrium but for the economy to function without disruption. This, again, is in the hands of the political leadership.

Can India sustain the investment momentum? Of infrastructure needs and projects to meet them, there is no shortage. Will high cost of energy and commodities make infrastructure built now too costly? Infrastructure costs are recouped over a long period and the higher costs would be spread out over time, and the resultant additional cost would be a fraction of the cost of not having that infrastructure.

Nor are energy prices going to stay high for long. It is one thing for Joe Biden to find in Ukraine the spine he publicly lost in Afghanistan, quite another to sustain high fuel prices close to midterm elections in November. Venezuela, Iran or US shale will be brought into play. Boris Johnson’s diminished political fortunes, after scraping through a confidence vote among Tory MPs, will make him more receptive to the call by France, Italy and Germany for an early end to the war.

The real yield on government and corporate bonds is still negative to trifling, even after policy rate hikes. The government should borrow, boldly, to invest in infrastructure. Hail growth, dismiss rating agencies.

This article was first published in Economic Times as The road map for India to sustain decent growth in a slowing world.

Read another piece by TK Arun on communal harmony India Must Chase Glory, not Past Sins in IMPRI insights.

Read another piece by TK Arun on Inflation- Rising inflation: Central Banks to be blamed? in IMPRI insights.