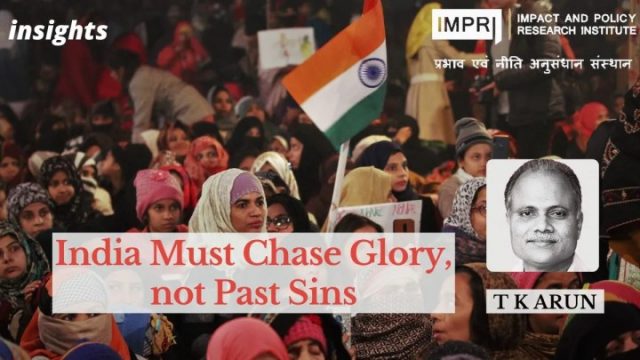 Violent protests against remarks against the Prophet, illegal, authoritarian retribution by the state by way of demolition of protesters’ residences, India’s condemnation in the Muslim world, ruling party spokespersons being dubbed fringe elements and disciplined by the party — these series of events followed attempts to see in the Gyanvapi mosque the possibility of another Ayodhya mobilisation.

These take India down a path that is dangerous, not just for the Muslim minority but for the majority and for the nation, as a whole.

The selective digging up of the past to locate Muslim rulers’ sins against Hindus is bigotry, not truth-seeking. But bigotry is not the only problem with the excavation of endless grievance. It can not just put India at odds with the Muslim world and pit Hindus against Muslims, but also send India’s subaltern castes on a wholly destructive, rather than redemptive, quest for contemporary retribution for past oppression, which spills over into the present.

It would also prevent India from owning its unique heritage that could potentially help spread the nation’s wings over much of the world, drawing on shared histories in Southeast Asia, Africa, Arabia and Persia, including the regions we now call Central Asia, apart from South Asia.

Human history is full of gore and violence, with its wars between peoples and oppression and exploitation within regions and communities. Leave alone by the modern standards of human rights, even by the standards of the ‘Declaration of the Rights of Man and of the Citizen” proudly proclaimed by the French Revolution, which excluded women, slaves and colonial subjects from its emancipatory sweep, the past is continuous violence against humanity, against other species, against nature. What kind of reckoning is possible with the past?

Should modern humans boycott the Pyramids because of the unimaginable torture imposed on the slaves who had to drag those chiselled boulders to ever-increasing heights along makeshift slopes, without the aid of wheels? Should we discard Plato’s dialogues or the Pythagoras theorem, because these intellectual achievements were built on the sweat of slaves?

The conquest of the Americas was accomplished more by the export of smallpox and syphilis to native Americans with zero immunity against these germs than by sword and musket. Long before the massacre at Wounded Knee, the native populations of North America had been decimated, in a process that today would be called genocide. Do we turn our back on everyone’s unalienable rights to Life, Liberty and the pursuit of Happiness, or is that one small step for a man and a giant leap for mankind?

Kublai Khan, the grandson of the Mongol invader and ruler Genghis Khan, set up his capital in Beijing, shifting China’s capital from the ancient city of Xian. The Chinese have not become any less Chinese for having built that city into an ever-greater megalopolis and retaining it as the Capital. The Song dynasty issued paper currency, drawing on the leather token currency issued by Kublai Khan.

We have to assimilate from the past what is good and great in it, reject the bad, and move forward. Rejecting the bad does not mean pretending that it did not exist. That pretence could prove as toxic as a splinter that has buried itself deep under the skin and is left to fester. Unlike the splinter, which can be dug out, the evil of the past cannot be undone. But it must honestly be acknowledged, and remedied to the extent possible.

Ever since humankind acquired the ability to produce more than was required to subsist, that surplus had been taken away from the producers and shared with others, to permit specialisation of different kinds of labour, including the intellectual, the spiritual and the administrative. In different parts of the world, different forms of social organisation were adopted to enable this process. Slaves were themselves property and whatever they produced belonged to their owners. The European peasant had to not only perform free labour, when demanded, for the liege but also hand over their surplus as rent.

But in no society was the social organisation as oppressive and dehumanising as in India. The hierarchical caste system, with the Brahmin at the top — lord of all creation, according to the Manusmriti — and the performers of assorted manual labour at the bottom, not just enabled material exploitation but also ingrained human degradation, some castes being deemed untouchable, even unseeable. Caste encouraged specialised skills and their transfer as tradition, but denied the toilers access to education and barred social mobility even across generations — all legitimised by a theology centred on the sins of past births. And this was wholly disingenuous because the core philosophy of Advaita preaches the essential unity of all things animate and inanimate.

To pretend such atrocities did not exist or that to acknowledge them is to trash Hinduism — Google’s upper caste employees forced the company in the US to de-invite a Dalit activist, calling her Hinduphobic — is to feed resentment and foster schism.

Eradicating caste is implicit in the democratic agenda. Building inclusive democracy, of which a cultural renewal minus caste hegemony is a vital part, is the way forward. Excluding Muslims harms not just Muslims and India’s democracy-in-the-making, but also the transition of Hindus to a cohesive community of equals.

This article was first published in The Federal as It’s time India chased glory, not past sins on 14 June 2022.