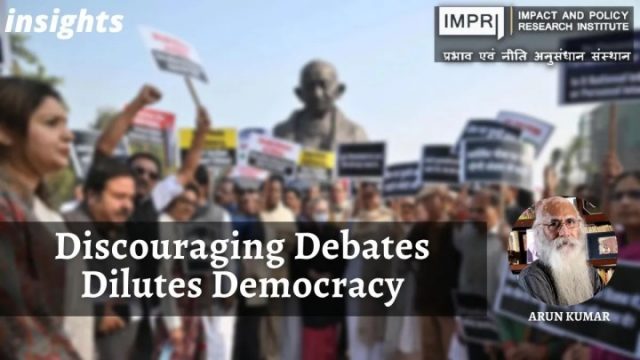 The news of Chinese transgression in Tawang on December 9 is disturbing. The opposition has repeatedly demanded a discussion in the parliament but the government has not agreed. The strength of democracy is that debate and dialogue provide society with a self-corrective mechanism. The government’s stock reply is that the matter should not be politicized and that we should have full faith in our army and our brave soldiers.

This is diversionary since no one is saying that our soldiers are at fault or are not fighting valiantly. The issue is about policy and India’s political stance vis-à-vis China because of which the brave soldiers are suffering. A full discussion in parliament will help clear the air in this regard.

The government’s defensiveness on important issues is also clear from the finance minister’s statement in the House that some people are “jealous” of the government’s achievements. Is a full discussion on the economy not required when the unorganized sector is suffering hugely due to high inflation and lack of work?

Accusations are not conducive to a proper debate. The Opposition does not buy the narrative of India being the fastest-growing large economy in the world. Further, even if that is true, how does that help the unorganized sector?

Is it that during India’s presidency of G20, the government is hypersensitive about criticism of its policies? It is quite possible that China’s current transgression is not only due to its long-standing policy of chipping away at our borders but also to bringing down India’s image of being a world leader. The question that arises is what is more important? The image or preserving democracy?

A self-confident leader would face issues frontally and answer questions rather than browbeating the opposition by branding them as “jealous”. In a parliamentary democracy, the opposition’s primary task is to raise national issues, and doing so is not jealousy. The leadership should either show why the opposition may be wrong or put into place correctives.

Is it not the case that the wholesale price index (WPI) rose above 10% for more than 18 months or that the consumer price index (CPI) increased by more than 6% (above the acceptable band set by the Reserve Bank of India) for more than nine months? These are official figures.

The resulting price rise has hurt the unorganized sector and reduced demand which is showing up in a decline in the official growth rate and in employment generation. A large number of women are out of the labor force and many educated young are not finding work leading to growing frustration among them.

The unorganized sector constituting 94% of the workforce is the vast majority in the country, so raising this issue is important and cannot be branded as jealousy. The government’s stock answer that other countries are doing worse is no consolation to the unemployed.

The pitfalls of inadequate consultation have been witnessed recently during the pandemic. The sudden decision to implement a brutal lockdown on March 24, 2020, was done without adequate consultation with experts or parliamentarians. It led to untold misery for the unorganized sector workers. The decision to impose a curfew on movement during night-time meant that workers and their families returning to their villages had to walk in the hot April sun without adequate food and water.

Even when the railways started transporting them, there were stampedes at the stations and outside. The train journeys were slow and people had to spend days in the heat to reach their destinations with little food and water. There were rumors about the availability of buses and so on. There was utter chaos.

The Delta wave of the pandemic hit the nation hard due to a lack of preparedness. Daily cases dramatically increased after February 15, 2021, increasing 400% within a month but this was ignored. The Kumbh mela became a super spreader with millions from all over the country gathering. It was not stopped to gain popular support. Huge election rallies were held in spite of expert advice to postpone elections and they further spread the disease.

Devotees are seen on the banks of the Ganges river during Kumbh Mela, or the Pitcher Festival, amidst the spread of the coronavirus disease (COVID-19), in Haridwar, India, April 12, 2021.

Vaccination started on January 16, 2021, at a leisurely pace. One and a half crore frontline workers were to be vaccinated by the February end. At this pace, it would have taken 15 years to vaccinate all adults in India. It was known that boosters would be required, possibly every year since the vaccine was for emergency use and its efficacy was not tested. At that rate, the whole population would never have gotten vaccinated and many vulnerable people would have remained unprotected. That is why the death toll mounted quickly in the Delta wave.

Advanced countries and even China started vaccination at a blistering pace (relative to their population) to protect their population. India did not order vaccine dosages till January 10. Serum Institute, the biggest vaccine manufacturer, was waiting for orders but did not get them and started exporting. Countries like Canada ordered dosages six times the size of their population as a precaution. We declared ourselves to be ‘Vishwaguru’ in January 2021 for having controlled the first wave. Complacency had set in and disaster followed.

The Delta wave led to a massive surge in the spread of the disease, a breakdown of the medical infrastructure, and a large number of deaths. The social structures appeared to be crumbling and all because the government thought it knew best and did not act in time. The advice was not heeded and consultation was ignored.

China has also paid the price for arrogance. It has had to reverse its Zero-COVID policy under intense public pressure. China has an authoritarian regime that limits debate and that makes it prone to big mistakes.

It is feared that this sudden change in the policy is leading to a surge in infections and deaths. Disturbing reports are already emanating and there is a worry that a new variant could spread across the world. China’s vaccination program got off to a quick start in early 2021. But, herd immunity has not been built in the population which can slow down the spread of the disease. The vaccine that it had quickly developed is apparently less effective and especially against the current dominant Omicron strain. The vaccine needed to be tweaked to protect against the new strain. Neither has that been done nor have vaccines developed elsewhere used so that many are vulnerable.

The obduracy of policymakers in China has resulted in a population that is fatigued by repeated lockdowns and not willing to obey their diktats. This can cause a rapid spread of the disease and deaths like what happened earlier in other countries. The only saving grace is that now the disease is better understood and perhaps the mortality rate will be low.

Repeated lockdowns have damaged not only China’s economy but also the world economy. China has been the manufacturing hub of the world. Stoppages in production there have led to supply bottlenecks and higher levels of inflation.

The lesson is that both in India and China, the dialogue could have prevented big mistakes in dealing with COVID. It would have led in a timely manner to rapid vaccination, extensive testing, boosters, tweaking of the vaccine, etc. The lesson is that policymakers have to be open to dialogue, admit mistakes, and change track.

The existence of strong opposition and policymakers to consider other points of view help devise more holistic policies. The constant questioning prevents complacency from setting in. Demonetisation was another policy that led to a major disaster since there was little consultation and the parliament was bypassed. The Citizenship Amendment Act (CAA) and the National Register of Citizens (NRC) are hanging fire, causing huge uncertainty. The farm Bills rammed through parliament without much discussion and were withdrawn only after a year-long agitation and disruption.

Dialogue is currently the need of the hour regarding the border situation and the state of the economy, especially because the unorganized sector, the vast majority has been badly hit. In spite of dialogue, things may still go awry but democracy minimizes its chances.

Dialogue leads to policies that are more thought through, mistakes are minimized in implementation and correctives are put in place quickly. Discouraging debate and dialogue dilutes democracy and imposes heavy costs on society.

This article was first published in The Wire as On China and Economy, Dialogue Is the Need of the Hour on December 21, 2022.

Read more by the author: Impact of Worker’s Migration on Society and Economy