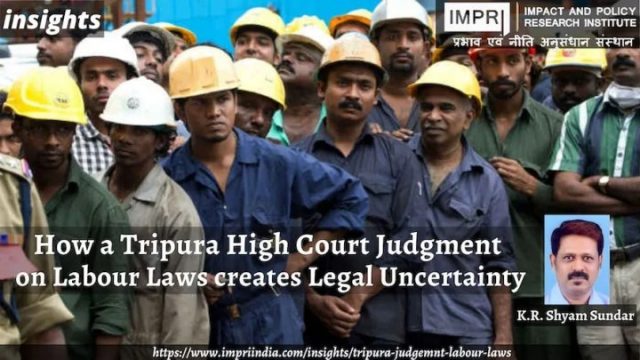 On September 10 last year, the High Court of Tripura in Agartala delivered a judgment in a case involving Glenmark Pharmaceuticals (as the petitioner) and several workers. This judgment has become a talking point in legal circles. Unless the said judgment is challenged before the appellate court, it is likely to cause great harm to the welfare of workers.

The Tripura high court heard an appeal by the petitioner and passed a controversial order. The petitioner challenged the maintainability of intervention by a Labour Court in view of the Repealing and Amendment Act 2016. The Union Ministry of Law and Justice notified the law on May 6, 2016 by which it repealed 196 laws and amendments dating back to 1863.

How the judgment impacts the Industrial Disputes Act

Of the amendments repealed is the Industrial Disputes (Amendment) Act, 2010 which covered, among other things, the subject of “individual disputes” in Section 2A of the Industrial Disputes Act, 1947. Prior to the amendment, individual disputes connected with or arising out of discharge, dismissal, retrenchment or termination of employment were deemed to be ‘industrial or collective disputes’ regardless of whether the individual worker’s disputes were supported or sponsored by other workers or not.

In 2010, individual workers could directly approach the Labour Court or Industrial Tribunal after 45 days of conciliation. So after the government’s discretion during the pre-2010 amendment period, which meant heavy dependence on the government’s whims and fancies, the 2010 amendment provided self-referral to the workers. This was indeed a significant reform.

The only shortcoming was that individual disputes would have to undergo the mandatory 45 days of conciliation before the workers could proceed to apply to the labour court or the tribunal. It is well known that individual disputes are more likely to be settled by adjudication as they are all about interpreting procedures and statutes, which is an adjudicating task. On the other hand, collective or economic disputes like terms and conditions of employment are conciliable owing to the possibility of mutual give and take inherent in such disputes.

The petitioner argued before the high court that the amendment and the creation of Section 2A in 2010 has been rendered infructuous due to the fact that 2016 Act has expressly repealed the said amendment. “Due to such repeal of the provision, the findings and awards passed by the Labour Court cannot have any force in the eye of the law”, it was submitted. The respondent workers filed their applications under section 2A of the 1947 Act in July 2017, whereas the 2016 Act had come into effect on May 9, 2016.

The repeal of a statute means the abolition of the law; once any statute is abolished, it is considered void, having no effect. Repeal means that there exists an enacted law which is to be repealed. So there must be a repealing statute, and the earlier statute must be repealed by the new enacting and repealing statuette. Due to the 2016 Act, the labour court simply did not have the jurisdiction to pass an award, as per the high court. Hence, it set aside the orders passed by the lower courts.

The 2016 Act included provisions relating to original and amending Acts. Some were repealed in full while others are partial (“so much is not repealed”). We do not know which part has been retained and which stood repealed.

The laws cover a wide range of laws, including, among others, the Foreign Recruiting Act, 1874, the Mussalman Wakf Validating Act, 1913, the Employers’ Liability Act, 1938, the Drugs (Control) Act, 1950, and the Information Technology Act, 2000. There were 24 labour laws covering, among others, laws on trade unions (2001 amendment), the National Rural Employment Guarantee (Amendment) Act, 2009, and the Industrial Disputes Act, 1947. Arguably similar exercises must have been carried out in the past or it would ensue because the IDA itself has undergone numerous amendments.

Simple logical and legal reasoning dictates that an amendment act is expressly enacted to replace the existing clause in the mother law lest it has no meaning. On the other hand, repealing the act does not automatically invalidate the amendment portion and revives the pre-amendment clause. For example, the 2001 amendment of the Trade Unions Act requires, subject to seven persons, at least ten per cent or 100 workers, whichever less, on the date of registration are needed to register a trade union under the Act. Do we mean that this clause, as per the Tripura high court’s thinking, is also repealed? Then, workers must be gleeful!

Likewise many questions could be placed. The cardinal principle of such repeals and amendments must remove duplicate and otherwise irrelevant laws. The exercise is to remove the dead wood from the statute’s stock.

The flawed thinking on the part of Tripura high court is further revealed by a clause in the 2016 Act itself: “4. The repeal by this Act of any enactment shall not affect any other enactment in which the repealed enactment has been applied, incorporated or referred to”. Earlier amendments to the IDA, such as the 2010 amendment of the IDA, had expressly repealed the earlier position and introduced new provisions. Now to repeal the 2010 amendment, where does the law according to the Tripura HC take us back: to the pre-2010 or somewhere else entirely different? This creates legal uncertainty, and devoid of logic.

Imagine the width and length of amendments passed under hundreds of laws (not merely labour laws) which, according to the Tripura high court, would all be swept to the historical dustbin by a single stroke of a pen. The point is whether the employers or the workers benefit from this kind of interpretation. It is a technical and procedural process that involves substantive issues.

Potential impact of the judgment

It is possible that in Tripura or elsewhere, labour courts might stop registering applications from workers based on Section 2A. The government and the judiciary should step in quickly to clarify this confusion as the judgment has come from a high court, though with its jurisdictional limits. While we are busy awaiting the implementation of the four labour codes, for a change, we are discussing issues relating to the old, though existent, labour laws.

The four labour codes are already technically void as there is a provision in the code introducing the legislature’s intentions to repeal the old laws being replaced by the four Codes. It is another matter as to why the old labour laws are still in force even after passage of the Codes two-three years ago. Clearly, this judgment suffers from an interpretative lacuna which quickly needs rectification.

This article was first published in The Leaflet as How a Tripura high court judgment hurts workers’ interests on December 19, 2022.