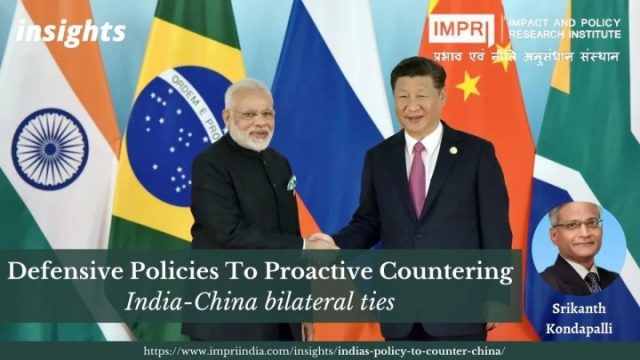 There were a few encouraging signs though recently to improve bilateral relations. Certain reports indicated the partial lifting of the ban on investments from China as a pragmatic gesture. The ban was imposed on investments from “neighboring countries” a year ago. People’s Bank of China’s investment increase in Housing Development Finance Corporation, Bajaj Financials and start-ups had rattled the Indian government earlier.

Barring a remote possibility of resuming active military hostilities in the border areas, India’s relations with China are headed towards continued armed stalemate in the new year of Tiger, in all likelihood setting back bilateral relations by several years if not decades.

India also went ahead, as a lone Quad member to do so, signalling not to boycott the Beijing Winter Olympics and Paralympics. This decision came during the 18th Russia-India-China trilateral meeting of the foreign ministers in late November 2021.

The Indian Space Research Organization signed an agreement with an Indian subsidiary of Chinese mobile phone company Oppo for extending Navigation with Indian Constellation (NavIC) facilities for position, navigation and timing services in far-away regions in the oceans for messages on safety. This has not gone down well in several quarters in India that banned over 200 Chinese apps a year ago.

Another signaling from India is its continuing participation in the multilateral fora in which China has been a member such as attending the summit meetings of Shanghai Cooperation Organization, BRICS, Russia-India-China trilateral or COP26 on climate change issues. While India maintained contacts with China at these multilateral initiatives, a subtle toning down in relations is visible, with the Indian leaders conveying indirectly through these institutions China’s perfidy on not observing written agreements but also willfully violating the sovereignty of nations in the name of building infrastructure projects. Moreover, there is a new-found Indian standing up in these institutions to protect Indian national interests.

Even though India laid out such a pragmatic policy, it made clear that China’s militarism is not acceptable. For instance, External Affairs Minister S Jaishankar had laid the bottom line in India’s approach towards China in the aftermath of the tragic killing of 20 Indian soldiers at Galwan on 15 June night in 2020. He stated that restoring peace and tranquility on the borders is a prerequisite for improving bilateral relations. As 13 rounds of Corps Commanders meetings and 23 rounds of WMCC meetings have not ushered in “disengagement and de-escalation” in the border areas, it is expected that bilateral relations are expected to further nose-dive in 2022.

Nevertheless, China had fired a few salvos to counter India’s standing up at Galwan and the aftermath. In July 2021, by visiting Nyingchi prefecture a few kilometres north of Arunachal Pradesh, President Xi Jinping threw the gauntlet against India of a subtle arms race, militarisation and border domination efforts. These were further enhanced with the construction of 602 “well-off society” villages in Tibet, 200 of which were built on borders with India. The Land Border Law passed by China’s parliament further expands the party-state domination over these areas.

Further on 29 December 2021, a reckless China announced a second tranche of “standardising” 15 place names in Arunachal Pradesh after the first such attempt in April 2017 to exert psychological pressure on India. All these unprecedented measures are intended to cow down India into submission. These trends will have a bearing on 2022 events.

Another trend to watch out for in 2022 is the subtle trade and economic de-coupling process that is underway between India and China recently. Although the bilateral trade shot up to over $102 billion in the first 10 months of 2021 — a target originally mentioned in 2005 and to be fulfilled by 2010 — this is mainly due to the surge in demand to counter pandemic infections and other goods in India. Of the nearly 4,000 items traded between the two countries less than 10 percent of these essential commodities are valued high.

India decided to scale down imports from China by boosting domestic production or trade diversion towards other countries. The Supply Chain Resilience Initiative between India, Japan and Australia for further trade diversification and digitalisation is another measure that would impact the India-China trade structure in the medium term.

There is also the larger regional context where India-China competition could intensify in the new year. Already, China tried to marginalise India’s role in Afghanistan through several “Himalayan Quad” meetings with select South Asian countries. China’s militarisation of South China Sea, its push for a Code of Conduct with Southeast Asian groupings and recent restrictions on shipping in the region are constraining India as with other countries. China’s 36 naval contingencies to the Indian Ocean in the garb of countering piracy incidents but with the intention to balance India and the United States have raised concerns.

A domestic factor in China may complicate the India-China relations in 2022. As China goes into a no-holds barred politicking between different political factions in the run up to the 20th communist party congress in October 2022, intense and competitive Han national chauvinism is expected from various groups on Tibet and other issues. This is also in the backdrop of the Western sanctions on China on Xinjiang, Tibet, Inner Mongolia and other issues. Prudently, India desisted from expanding the basket of contentious issues with China but may have to re-evaluate its policies in the backdrop of pounding pressures from Beijing.

All in all, China’s intransigence to implement border protocols that it signed with India, its belligerent militarism and border domination efforts and forays in the Indian neighborhood have resulted in straining relations with India. These have also jeopardized the “informal summit” meetings between the two leaders at Wuhan and Chennai and triggered downhill regression in bilateral relations that are expected to continue in 2022. In this backdrop, India needs to shed its defensive policies and proactively counter China.

Read another piece on China titled China has taken the arms race to a different level in IMPRI Insights.

Read another piece on world emerging power titled Amid signs of Cold War 2.0, China ups ante to be recognized as world’s pre-eminent power in IMPRI Insights.