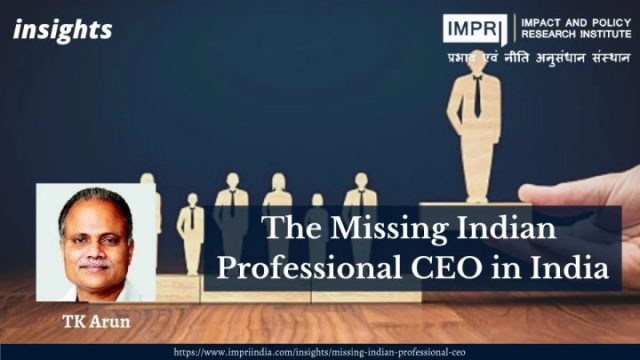 The sublime and the ridiculous both attend on the celebrity the Indian middle-class showers on people of Indian origin who are anointed leaders of the world’s leading companies. Sublime, deservedly, because of the rare achievement it celebrates. Ridiculous, because it ignores the reality that some Indian companies are global giants, and Indian professional managers lead them, ably and successfully, without arousing middle-class frisson.

TCS, leave alone the entirety of the Tata Group, for example, has a market capitalization much higher than IBM’s, but when IBM appoints Arvind Krishna as CEO, he becomes a folk hero, while TCS CEO Rajesh Gopinathan struggles to emerge from the shadow of his predecessor.

But the question remains as to why so few Indian companies that matter are run by professionals. The obvious answer is that most big Indian companies tend to be run by their founders or their heirs, that Indian companies have not been around long enough for founding families to exhaust their supply of scions interested enough to run the family firm. The less obvious part of the answer is what matters.

L&T is unique in that two foreigners, Danish engineers, founded the company in India and it grew as an Indian engineering powerhouse, closely working with India’s space and nuclear programs, apart from diversifying into a great many areas. After the passing of the founders, it has been managed by Indian professional managers. A brief encounter with the Ambanis, who tried to take the company over in the early 1990s but failed, gave the company a taste for scale. It has grown from strength to strength.

ITC used to be the Indian arm of British American Tobacco (BAT), until Indian managers virtually took over management control, with the help of Indian institutional investors, who hold a stake large enough to hold BAT’s official and unofficial proxies at bay. Of course, ITC has had to live up to the image of a national champion to justify support from Indian institutional investors. For one, it is virtually the only tobacco major in the world to aggressively diversify to build a non-tobacco future that would eclipse tobacco eventually.

It is now commonly counted among India’s FMCG majors but its share price takes a discount on ESG (environmental, social, and corporate governance) disfavor for tobacco. That is not entirely a disaster for shareholders, potentially including pension pots, looking for a fundamentally strong company with a good dividend yield.

Let Them Take Over

The absence of a market for corporate control is the single biggest reason for the paucity of professional CEOs at Indian companies. This keeps founding families in charge, even if the company’s performance is suboptimal. A related factor is the absence of a vibrant market for corporate debt, including for subprime debt.
If a company’s resources — human, intellectual property, and physical — are not being put to optimal use, its share price would reflect that gap. It makes sense for someone to buy enough shares to acquire a controlling stake, provided the share price does not run up higher than is justified by its optimal output potential.

Having bid up the share price (in which course, all shareholders gain) and obtained control, the new managers have to run the company at a higher level of efficiency, to justify the higher share price.

But where do professional managers have the money to buy up enough shares to gain control? By issuing high-yield bonds. The takeover spree in 1980s America was financed by so-called junk bonds, whose issuance was orchestrated by Michael Milken, a financing whiz who was sent to prison for securities fraud but probably deserved a fairer deal.

The Indian market for corporate debt is barely alive, not to speak of a market for high-yield bonds. Leveraged buyouts would fall foul of regulation. The Indian system favors incumbent managements and wards off efficiency-boosting hostile bids that would put professional managers in charge. A radical fight against privilege would not be limited to the political sphere. A market for corporate control is part of the broader democratic agenda India desperately needs.

First published at The Economic Times titled Why is there a paucity of professional CEOs at Indian companies? on 4 January 2022

Read another piece by T K Arun titled Under the Shadow of the Virus, a Year of Despair Giving Way to Hope in IMPRI insights