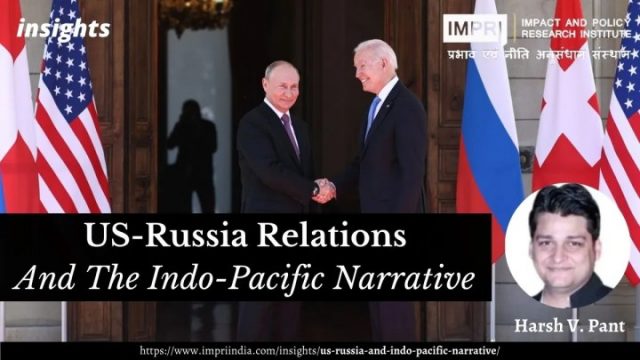 Russia and the West will be engaging each other next week in a round of highly anticipated meetings. The Strategic Security Dialogue initiative launched by United States (US) President Joe Biden and his Russian counterpart Vladimir Putin at their summit in Geneva last year will be held on January 10. Though focused on stabilizing the post-Cold War US-Russia nuclear arms control architecture, Ukraine is also likely to feature in the deliberations.

This will be followed by the North Atlantic Treaty Organization (NATO)-Moscow talks and the Organization for Security and Co-operation in Europe (OSCE)-Russia meeting, both of which are likely to be dominated by the Ukraine crisis. An emergency meeting of NATO foreign ministers has been called ahead of next week’s engagements to devise a cohesive response to the Russian military build-up around Ukraine.

There is growing concern in the West about the situation in Ukraine and about Putin’s threatening posture towards a former Soviet territory that is now seeking to emerge out of Moscow’s sphere of influence. NATO has been enticing Ukraine, but never fully making a clear commitment, thereby endangering its security in fundamental ways.

Today, Russia is in possession of a part of Ukraine in the Crimean peninsula and is supporting a separatist rebellion in the east. For the last few weeks, Moscow has raised the stakes further by amassing tens of thousands of troops around Ukraine, generating concerns about an impending war and possibly even more territorial seizure.

Biden’s approach has been described as uniting “the alliance behind two tracks — deterrence and diplomacy” even as Washington continues to insist that the West is “unified as an alliance on the consequences Russia would face if it moves on Ukraine.” During their phone call last month, Biden told Putin that the US and its allies would respond decisively to any invasion of Ukraine.

While the US has threatened Putin with sanctions “like none he’s ever seen” if Ukraine comes under attack, its European allies have also issued joint as well as individual statements underlining that Moscow will face “massive consequences and severe costs” in case of any further military intervention in Ukraine. Along with economically crippling economic sanctions, the West is threatening steps such as a complete cut-off from the international financial system and moves toward greater NATO integration with non-allied European nations.

For its part, Russia has argued that the military build-up at the border is largely a defensive measure against NATO. Putin has issued his own security demands to be met by the West which include legally binding guarantees against NATO’s eastward expansion as well as against certain weapons being sent to Ukraine or any neighbouring countries. Russian demands which also include a ban on sending US and Russian warships and aircraft to areas from where they can strike each other’s territory and a rollback on NATO drills near Russia were certain to be rejected by the West.

Despite the growing sense of impending doom, it is unlikely that a war in Europe is in the offing. Putin’s preference is to put the West under pressure and to force the West to recognize its claims in eastern and central Europe. The threat of escalation is more important, rather than an actual escalation which can result in heavy Russian casualties.

Putin is hoping that this brinkmanship is enough to let him achieve his aims of showing NATO its place and further destabilizing Ukraine as well as drawing a red line for other regional states who may now find NATO less attractive. Moscow has other ways of escalating pressure without actually launching a full-scale invasion.

What is also important is that this crisis has once again made it clear to the US and the West the need to find a modus vivendi with Russia. Putin told Biden last month he was “convinced” the pair could work together based on “mutual respect and consideration of each other’s national interests.”

New Delhi will be carefully watching the diplomatic waltz being performed in the West next week as stability in Russia’s ties with the wider West would alleviate some pressure on India at a time when the rise of China has changed the geopolitical calculus for India, both in its periphery and in the wider Indo-Pacific.

Through its recent diplomatic moves, Moscow is hinting that it wants to move out of the looming shadow of China, and accommodation with the West might go a long way in realigning Russian foreign policy priorities. For the US, engaging Russia can be a smart move if it wants to focus on its long-term strategic competition with China.

Breaking China-Russia should be a priority for the US, howsoever far-fetched it might seem at times. It must be remembered that the Cold War may have formally ended in 1990, but it was won in the 1970s when Henry Kissinger and Richard Nixon managed to split the Communist bloc by weaning off China from the Soviet camp.

New Delhi will be hoping that Russia and the US manage to narrow down their differences as it would favorably alter strategic realities for India. It’s not evident if there is a political appetite in Washington for a dramatic shift vis-à-vis Russia and India’s ability to shape the final outcome is rather limited. But at a time when China’s rise has managed to upend most of the assumptions about the global order, the US-Russia tango in Europe will have a significant bearing on the Indo-Pacific balance of power.

First published in Hindustan Times, titled, The US-Russia tango, and the Indo-Pacific.