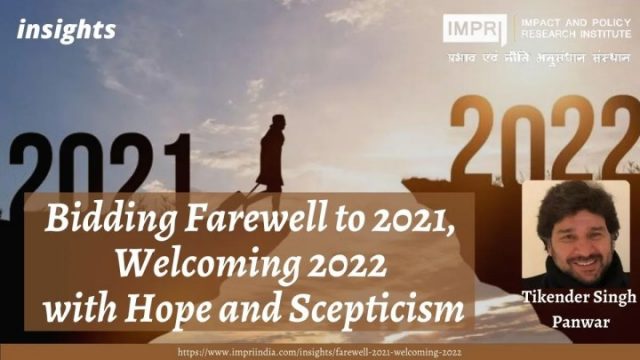 The year 2022 is seen as a year of optimism and the augury of better days. For 2021 was a year of massive loss of lives of the people owing to the Covid pandemic, loss of livelihoods because of a slowdown of the economy, and loss of habitat owing to climate change-induced and other natural disasters. All of this had a big toll on the human population and the nature on which we survive.

The cities faced a major brunt of all of this. The pandemic hit them the worst, people became jobless, huge informality crept in, further compounding the crisis. However, the cities also contributed to the phenomenal wealth generation of few in the world and the world inequality report is a pointer towards that. This goes deep into the whole bunch of ideas of sustainable goals. Are we anywhere close to them?

Will the Cities ever be sustainable? This is a question I ask myself and all those who are related or are linked in the city development process. Unfortunately, the way and how we are building our urban centers inherently speaks volumes of the unsustainability of the processes and the effects.

According to a study conducted by the World Bank across 10,000 cities in 25 years, the cities that connect their growth to the economic demand which are then supported with comprehensive plans, policies, and investments are considered to be more sustainable.

According to the report, the cities must have a robust job market, flexible building regulations, dependable public transit, and access to essential services and public spaces, and cultural amenities. The year 2021 has proven how the cities have become centers of capital accumulation, aggrandizing public spaces for the super-rich and this is being done in the planning processes; and how meager is the outreach of public services.

Take for example the health services across the globe and especially in India, there was a virtual collapse of the health system which was profoundly dependent upon the private health care system. Barring a few states, like Kerala, Himachal Pradesh et al, most of the states were gasping even for oxygen.

So why is it that how we have designed our cities has exposed the sheer hollowness of the city development trajectory? Despite the fact, an institution like the World Bank is also now advocating for inclusive growth to ensure sustainable cities?

On the global scale in the average Sub-Saharan African city, 60 percent of the population lives in slums. In developing countries, it is nearly 34 percent.  Currently, about 55 percent of the world lives in urban areas and by 2050 it is projected that 66 percent will be habituating in the urban centers. With the manner and how urban centers are developing with spontaneity, it will not be too far that most of the cities in South Asia would have more population in slums.

So where does the problem lie? Let us understand the following dictum of the same report: “Policymakers have often misjudged the potency of market forces. Many policymakers perceive cities as constructs of the state—to be managed and manipulated to serve some social objective. In reality, cities and towns, just like firms and farms, are creatures of the market.”

This is what the city leaders were debating in World Habitat III in Quito in 2016, and the executive director of Habitat demolished this very idea of developing the cities through laissez-faire. In a way, the same fundamental reason of treating cities as entrepreneurs and market forces deciding the urban trajectory, which has led to the unsustainability of the city development in the last five decades is once again being pushed by such a powerful institution.

The market-led forces in developing cities have shown how erroneous this idea is.  The accentuating of moribund urbanization witnessed around the world and particularly in India in the last three to five decades is precise because of overemphasizing reliance on this idea. The idea, that the market forces will be a panacea for all the ills.

Indian cities were also not left behind and slogans like “cities are engines of growth”, “competitive cities”, “smart cities” were coined. Most of these slogans were veneered with an impression that the cities by becoming competitive, highly productive, and digitized will ameliorate problems grappling the cities and citizens. However, underneath this veneer was a strong foundation of the idea that the State will withdraw from some of the basic services it was providing in the urban realm.

These services like health, education, sanitation, water, electricity, etc., most of them were pushed for either abject privatization or selective privatization. The major slogan was efficiency and competitiveness to attract investments for the growth of the city.

No doubt there is a huge demand for infrastructure and according to the OECD globally for growth and development infrastructure investments of $6.3 trillion a year throughout 2016-30 will be required. Where is this money going to come from? In India likewise, according to the Isher Judge Ahluwalia report on urban India, it is estimated that Rs 40 lakh crore is required in the period from 2012-32 just to provide the bare minimum facilities in Indian cities and towns.

The city planning is adapted in such a way by the city planners, most of whom are parastatals like the DDA, etc., to attract investments. However, with all the efforts, the investments, in greenfield projects and other major infrastructure projects, is not even the bare minimum.

Then came the Modi era and along with that came the justification of privatizing even the governance in cities through the SPV model of infrastructure development under the smart cities. After six years of the announcement, not a single smart city can be accoladed by the government itself.

The cities with such a planning process have become centers of massive inequity, which was further substantiated by the Oxfam report. The changed situation in the cities has shown how fragile is the social order. In the lockdown announced in March 2020, the massive exodus of migrant workers from the cities is an ever-haunting memory. Likewise, the bodies of the dead floating in the rivers and the dead not finding a place in the cremation ground are not too old. The health systems were completely overwhelmed and the fallacy of insurance-driven health system could be seen very vividly.

As they say, the future is impregnated in the present and present in the past. And we have seen that the past and the present models of city development are utterly fallacious and unsustainable. Hence despite the augury of better days, there is little scope for a better 2022, unfortunately.

Work with the basics

The Indian cities require some of the basic transformations to take place. These must begin immediately to ensure that the urban centers become sustainable both for the people and the business.

Planning must be handed over to the city governments and smaller towns must be equipped with proper planning personnel to ensure that inclusive equitable models are developed. Plan from below and take it to the top. The current model of planning from the top and thrusting it below is completely unsustainable. Empower the people and democratize the elected institutions like the local governments. Planning for people and not for the market must be the guiding principle.

Some of the basic services like sanitation, health, education must be strongly controlled by the municipal bodies and not just left to the big capital.

Housing is an important sector where multifaceted interventions are required. From public housing to the rental, to ensuring land tenure rights to slum dwellers and improving their conditions, all this must be ensured for a better habitat. And all of this is part of the SDGs, hence the proper implementation of the SDGs is important for ensuring a better habitat.

The cities have transitioned from large hubs of manufacturing centers to a larger space of informal sector workers. The gig workers based on a platform-based system are a growing entity. The city must be adapted to cater to the needs of such workers. From providing labor hostels, to rental accommodation to ensuring statutory benefits, all of this must be ensured in the city government’s framework.

Health, which is so pivotal for our survival cannot be left for private capital accumulation. Cities must be designed to ensure that more primary health centers are opened in neighborhoods and the city developmental model of opening large capital intensive super-specialty hospitals must be shunned. Take for example Gurgaon where there is a large super-specialty hospital but hardly any neighborhood health center in the public health service sector.

Building a culture of participatory governance and accepting diversity in the urban centers is another important area which the cities will have to develop to ensure that their residents can live without fear.