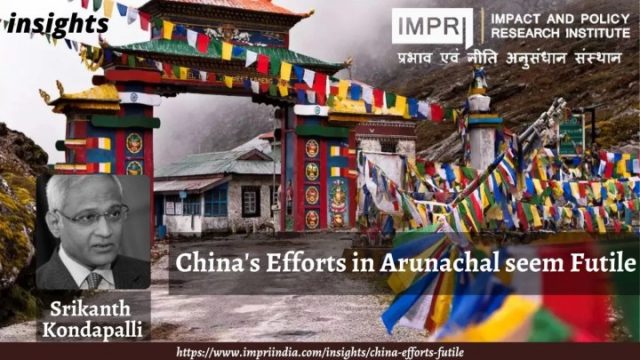 While the nation’s attention is drawn acutely to the western sector of the border between India and China in the wake of the bloody fisticuffs on the night of June 15, 2020, and the aftermath, developments in the Indian eastern flank are no less alarming. Indeed, China’s revival of irredentist claims, strategic border domination efforts, the creation of pinpricks or even waging psychological warfare against India. These are, of course, stoutly countered by India by matching, if not overpowering, build-up of capabilities, plans, strategic alignments, and diplomatic manoeuvres.

When China occupied Tibet in 1951, its main focus was on the Aksai Chin region for transporting and sustaining its troops. China’s attention hardly elicited Arunachal Pradesh’s (at that time, North East Frontier Agency) region. Indeed, in 1960, China’s Premier Zhou Enlai even suggested a “swap deal” of accepting south of the 1914 McMahon Line (the current day Arunachal Pradesh) as a part of India provided the latter recognised Aksai Chin as a part of China. The offer was repeated by Deng Xiaoping in 1980 but was not accepted by India due to China’s tentative and dubious claims, even for Aksai Chin.

The territorial dispute across 1,126 kilometres of border between India and China in the eastern sector is actually in six areas, including Longju, Asaphila, Migyitun, Namka Chu, Samdurong Chu, and Chantze. Frequent transgressions by China’s troops are reported in these areas, specifically in Kameng, Fish Tails, and other areas. Recently, border transgressions by China were reported at Hundred Hill at Kaho, Andrella Valley at Dibang, Maja in Upper Subansiri and other areas.

However, since the mid-1980s, China has begun eyeing Arunachal Pradesh for its strategic location, boundless natural resources, and historical and religious affiliations of Tibet to this region and to balance or contain India. Samdurong Chu incident in 1986 was the first pointer in this direction when about 200 Chinese soldiers crossed the Kameng sector at an increasing rate of transgressions that year. Earlier, in 1975, the Tulung la incident resulted in four Assam Rifles soldiers being ambushed.

India doubled down by organising the spectacular Operation Checkerboard with air-land battle scenarios. The Chinese were rattled with the resulting kill ratio – that is estimated at ten Chinese casualties for every one Indian soldier dead in the simulations, according to Chinese military sources. As a result, Deng Xiaoping began diverting attention to “Asian century” debates. At the 8th border talks to resolve the territorial dispute in November 1987, a flustered China also proposed creating a demilitarised zone in the eastern sector.

Again, at the 4th Joint Working Group (JWG) meeting in February 1992, China proposed that the local military personnel should meet at Bumla to sort out border frictions. Later, in August 1995, at the 8th JWG meeting, China also agreed to withdraw troops from four forward military posts in the Wangdong area. At the next 9th JWG meeting in October 1996, China also agreed to open an annual military meeting point at Dichu in the eastern sector at the level of a major general.

Thus, even though China realised it could not force India into the eastern sector, it, however, raised unsettling irredentist claims in the region by equating Arunachal Pradesh to “southern Tibet” (zangnan). Since the mid-1980s, China began arguing that since the 5th Dalai Lama hailed from the Tawang monastery, it should belong to communist China now! Even though China’s foreign minister, Li Zhaoxing wrote a book lampooning the 5th Dalai Lama, China began assuming “ownership” over him and the monastery. Today, with President Xi Jinping proclaiming the “China Dream” of eyeing “lost territories” historically, full normalisation of relations with India has become problematic for decades to come.

The then China’s ambassador to India Sun Yuxi went further, just before the visit of President Hu Jintao to Delhi in November 2006, by declaring to a tv channel that the whole of Arunachal Pradesh is a disputed territory between the two countries—thus moving farther than Zhou or Deng’s “swap” deal offer. In early 2007 China also denied a visa to an IAS officer from Arunachal Pradesh, which led India to cancel the whole visit by 107 officers to China. Several sportspersons, defence personnel, and others who were domiciled to Arunachal Pradesh, likewise were denied visas by China.

China also began diverting river waters from Yarlung Zangpo in Tibet to its northern areas under the South-North River Diversion Program. As Yarlung Zangpo enters Arunachal Pradesh at Namchabarua, an estimated 62 billion cubic metres of water is discharged at this point. With accumulations from the Siang River and others downstream, the Brahmaputra River gains strength, and when it reaches Bangladesh through Meghalaya, it discharges an estimated 220 billion cubic metres of water.

However, with the river diversion projects upstream – with about 26 medium to large dams planned by China and some three times bigger than the existing Three Gorges Dam – the lower riparian states such as India and Bangladesh are concerned about water shortages or China using this as a “water bomb”. In October last year, when Kameng river water became dark due to turbidity, speculations were rife about China’s antics and concerns about biodiversity in the region.

A more concerted effort was made by China to dominate the region by first constructing dual-use infrastructure projects and later brazenly creating “well-off society” villages or even military installations across the Line of Actual Control (LAC) with Arunachal Pradesh. China began constructing 624 “well-off society” villages in 2017, and 200 of these were constructed in the LAC areas with India or on the borders with Bhutan and Nepal.

At Tsari Chu village at Migyitun on the border with Arunachal Pradesh, two military outposts of China have also come up, while at Longju in Arunachal Pradesh, construction activity with road and forest clearance has been reported recently. These efforts were matched with the large-scale deployment of military assets to the region opposite to Arunachal Pradesh.

Over a period of time, China has built eight airfields opposite India in the eastern sector, including Gonggar, Hoping, Pangta and Linzhi, besides other airfields deeper inside at Chengdu, Kunming and Chongqing in the recently refurbished Western Theatre Command. Reports in August 2022 indicated that China began building a helipad closer to Chaglagam closer to Anjaw district in Arunachal Pradesh.

Its road construction projects in Tibet have also been expanded to over 1,20,000 kilometres, while after the 2006 inauguration of the Gormud to Lhasa railway, China began constructing railways from Chengdu and Kunming, passing through Nyingqi prefecture opposite Arunachal Pradesh. For instance, due to this infrastructure development, the military outposts across the LAC are well connected in Tibet – almost about 8 kilometres near the LAC compared to 20 or even 120 kilometres where the Indian troops are connected on many areas of the Indian side of the LAC.

Also, as psychological warfare, China renamed six places in Arunachal Pradesh in 2017 and another 15 in late 2021. India brushed off Beijing’s such antics. Earlier in June 2009, China blocked an Indian loan request from Asian Development Bank for flood control, sanitation and water management projects in Arunachal Pradesh. Frequent reports also indicate the intimidation or even kidnapping of youths across the Upper Siang district, such as the incident on January 18 this year.

This came soon after the Dokhlam imbroglio on the Sino-Bhutan border. In the letter, Xi stated, “Without peace in the territory, there will be no peaceful lives for millions of families. [I] hope you will motivate more herders to set down roots in the border area like galsang flowers, and become guardians of the Chinese territory and constructors of a happy hometown”.

Such efforts of China were stoutly opposed by India. While agreeing that China’s military deployments and infrastructure projects pose concern for India, the Indian Army’s Eastern Command chief Lt. Gen Pratap Singh Kalita stated at the press conference on May 16 this year that there have been no border transgressions by China since the 1959 Longju incident in the region.

India’s response to China’s efforts is swift and decisive. At the infrastructure level, India began the strategic road construction connecting border areas. The Border Area Development Programme witnessed a massive hike in allocations in Arunachal Pradesh recently. Eight-foot tracks measuring around 600 kilometres are being laid down in Arunachal Pradesh.

Arunachal Pradesh has a formidable array of troops and weapon systems – an estimated 1,70,000 troops, an additional two Divisions since June 2009, a Brahmos cruise missile regiment, two squadrons of Su-30 MKI fighter aircraft since July 2008 and bases at Hashimara, Chabua and Tezpur for deep penetration strikes into China. Since 2009, India also announced strategic nuclear weapons deployments to the Northeast as a deterrent against China.

The Indo-Tibetan Border Police (ITBP) raised 34 additional battalions to Arunachal Pradesh for front-line defence against China. The ITBP created 47 new border outposts along the border with China, in addition to 12 staging camps.

To bridge the civil and military aviation infrastructure gaps in the region, India began revamping the advanced landing zones in the eastern regions of Arunachal Pradesh. Also, in April this year, Alliance Air made its maiden visit to Pasighat from Dibrugarh with Union Ministers Jyotiraditya Scindia and Kiren Rijiju onboard. Soon, air services are expected to connect Tezu, Mechuka, Ziro and Tuting.

At the political level, India began sending high political functionaries to Arunachal Pradesh such as President, Vice President, and Prime Ministers, periodically. Last October, for instance, Vice President Naidu visited Arunachal Pradesh. Also, the Dalai Lama made frequent visits to the region, specifically to the religious Tawang Monastery. In November last year, the Dalai Lama visited the region, with the previous visits in 1986, 1996, 1997, twice in 2003, 2006 and in 2017. These elicited sharp reactions from China but in vain.

Thus, while China had undertaken a multipronged approach to counter India in Arunachal Pradesh, these remain ineffective and counter-productive. Arunachal Pradesh today is a formidable bulwark against the Chinese juggernaut at religious, cultural, political, economic, military, and democratic levels.

While China has been pumping enormous economic resources, specifically into infrastructure projects and the military in Tibet, these are devoid of legitimacy and popular support. As a thriving democracy and with increasing economic growth rates and inclusive development, India is more than a match for China.

Hence, when the new German Ambassador to India, Philip Ackerman on August 30 this year termed China’s claims on Arunachal Pradesh as “outrageous” and the periodic border transgressions as a “violation of the international order”, China is increasingly losing its face in the international community to its aggressive policies. Also, since the 1962 border clashes, the United States recognised McMahon Line as the border between the two countries.

Japan’s Deputy Prime Minister Taro Aso, as well supported India on Arunachal Pradesh. The writing on the wall for China is thus increasingly becoming clear both at the bilateral and international levels.

This article was first published at Border Lens as China Storming Arunachal Bastion in Vain on September 13, 2022.