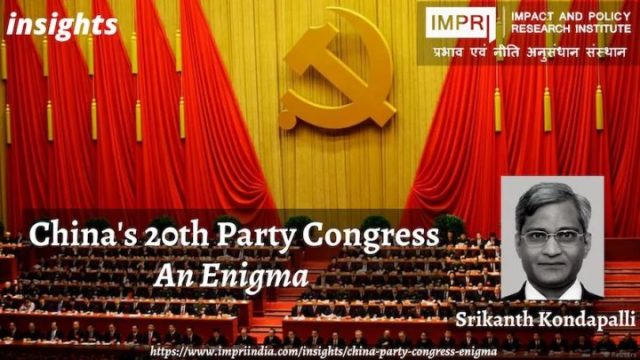 As the 20th Communist Party of China congress unfolds October 16-22, there’ll be global scrutiny of the official reports, political gestures and statements made there. Much of this process is shrouded in mystery and intrigue, but it has consequences for the world.

For one, thousands of MNCs have invested trillions of dollars in China. ‘Risk analysis’ reports will be much sought-after, especially as President Xi Jinping pursues his “Made in China 2025” and “dual circulation” strategies to reduce economic and technological dependence on the West, while the US seeks to ‘decouple’ from the Chinese economy, too.

In the main, three things will happen at the 20th CCP congress: the current General Secretary of the Communist Party – Xi Jinping – will read out his work report on achievements in the past five years and the “guiding principles” for the next five; changes to the CCP constitution, with speculation rife that Xi will be anointed ‘party chairman’; and the report of the party’s Central Committee’s discipline inspection commission (which maintains dossiers on 96 million party cadres!) will be presented.

On October 23, the Chinese people and the world at large will be provided a glimpse of a parade of the seven most powerful party leaders selected to rule over the country’s 1.47 billion people for the next five years.

The whole process of this selection of the Top 7 leaders of the apex Politburo Standing Committee (PSC) and 25 Politburo members is an opaque process. Last week’s 7th Plenary Session of the 19th CCP provided no discernible clues on who the new Top 7 of China will be.

The formal process is that 2,296 ‘delegates’ to the congress, elected from the provinces, elect 200-odd members to the Central Committee of the CCP, who in turn elect the 25 Politburo and 7 PSC members. However, the actual process is informal selection — with party elders and current leaders retreating to Beidaihe, a sea-side resort, and choosing the new leaders and signalling to the delegates whom they need to ‘elect’.

Such a lack of transparency is a Soviet legacy and is followed by Communist parties across the globe. To divine Soviet political developments correctly, which was crucial during the Cold War, Western scholars developed the esoteric discipline of Kremlinology to read the tea leaves from extremely limited official handouts and information on possible changes in leadership and power.

Reading Chinese developments (Pekinology) is equally difficult and inexact, as many seasoned reporters and scholars have found out after each CCP congress. It’s unlikely that we will fare any better this time. All the same, analysts will intensely scrutinise particular documents or the presence or absence of leaders in a meeting to figure out who is rising and who is falling in the CCP power structure.

Frequently employed analytical tools in Pekinology include looking at factional leaders’ guanxi (political connections), relative appearances in official media or visits abroad or domestically, prominent “speech acts” of specific leaders, promotions to prominent party secretary positions in provinces or central government posts, or their removal and purges, or prominence given to or downgrading of significant “political lines” associated with leaders. This is a tedious task even for highly qualified professionals.

China’s official media put out in public the profiles, educational qualifications, gender and professional status of the 2,296 delegates. The tone and tenor of this display is to let the world know how young and gender-conscious the Communist Party is. Xinhua, for instance, stated that the delegates are “highly qualified ideologically and politically…are competent in discussing State affairs…” It stated that the average age of the delegates is 52.2 years and that women constitute 26% and ethnic minorities 11% of the delegates.

What the official handouts have not dished out is why, despite such progress, not a single woman member has made it to the PSC so far. Nor do we know how members beyond the age of 68 get selected to the PSC against the all-powerful party’s own age norm.

This article was also published at the Deccan Herald as Let’s do some Pekinology on October 16, 2022.