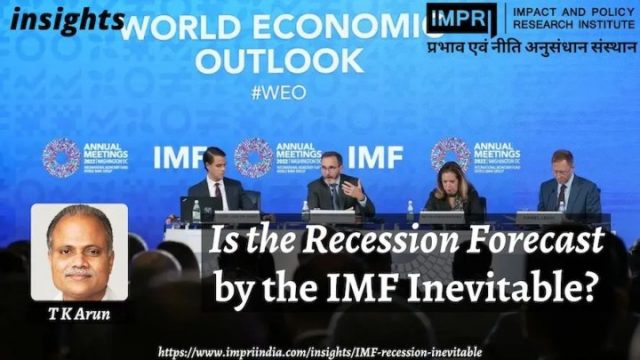 The latest World Economic Outlook (WEO) from the International Monetary Fund (IMF) projects a global slowdown, with one-third of the world economy actually shrinking and overall growth slowing to 2.7% in 2023, with a 25% probability of growth slipping below 2%. A slowing world is not great news for India, as world demand for its exports would suffer and adverse capital flows could cause disruption.

The WEO attributes slowing growth to three reasons: the war in Ukraine, inflation that induces the world’s central banks to raise policy rates, and supply disruptions in a China still obsessed with Zero Covid.

China will think of changing its policy on Covid probably after the party Congress gets over later this month. After all, it is not the superiority of the Chinese system over western democracy that would be signalled by continued lockdowns in China long after the west has put a lid on pandemic restrictions and learned to live with Covid, with the aid of vaccines and medication.

Impacts of the Ukrainian conflict

The war in Ukraine affects the rest of the world in two ways: higher energy and food prices and uncertainty that persuades footloose capital to seek refuge in the safety of US government bonds, fleeing non-US economies and causing financial turbulence in those places. When capital floods into dollar assets from the rest of the world, that strengthens the dollar. The yen has depreciated 23% against the dollar, the pound, 18% and the euro, 16%.

This compounds the effect of increase in energy and commodity prices in dollar terms. Brent crude is 11.9% higher than a year ago, for example. That would translate into a 28% increase in Euro terms. In order to prevent further increase in import prices, countries have to prevent their currencies depreciating further against the dollar. That means raising domestic interest rates when the US central bank, the Fed, raises policy rates in the US, to prevent widening of the interest rate differential between the domestic economy and the US. The higher the gap in interest rates, the more the effect on the currency.

Only Japan and China have been following an interest rate policy tailored to their domestic circumstance, and have had to pay the price with higher levels of depreciation against the dollar, offset, to a certain extent, via intervention in the currency market.

India’s foreign exchange reserves are lower by about $102 billion as compared to a year ago, some due to valuation changes — euro and yen holdings would be worth fewer dollars, because these currencies have depreciated against the dollar — and mostly due to sale of dollars in the domestic market to prop up the rupee against the dollar.

The real effective exchange rate of the rupee, vis-à-vis a basket of currencies, is higher today than a year ago, thanks to such defence of the exchange rate against the dollar. A collateral effect of selling dollars to defend the rupee is to suck out rupees (the RBI buys rupees, in exchange for dollars), and the reduction in liquidity tends to put upward pressure on interest rates. In other rates, the RBI raises domestic rates not just by raising the repo rate but also by selling dollars.

The war in Ukraine, in other words, has the same effect as monetary tightening in the US to combat higher inflation, in those parts of the world that do not experience the spike in gas prices that Europe is going through.

The IMF advises the world to follow monetary tightening to combat inflation and to rein in the urge to loosen policy to salvage crumbling growth — so as not to uproot inflation expectations. There is a far less painful alternative that this international institution dominated by the West does not explore: end the war and ease immigration curbs in the US.

US employment continues to be strong, and there are two job vacancies for every job seeker in the US. The unmet demand for labour in pre-school, childcare and healthcare sectors depresses the supply of labour: women, who bear the bulk of the burden of caring, whether of children or the aged, have to stay home, caring, instead of going out to work.

Truck drivers are in short supply in the US, as are ground handling staff at airports. Farms don’t have fruit pickers. Tech companies cannot hire enough engineers — Elon Musk not just advocates greater immigration but sets a personal example in increasing the population. Hospitals are forever short-staffed. Wage pressure is a serious factor in inflation and this is better curbed by immigration rather than higher interest rates. Higher rates in the US raise rates across the world and depress growth. More immigration would cool prices, foster growth in the US and improve lives — both of the immigrants and of their relatives back home.

And why does the war in Ukraine continue? It is a geopolitical choice on the part of the West. US Defence Secretary Lloyd Austin said in as many words that the US goal in Ukraine is to emaciate Russia. This is accomplished by maintaining an endless supply of ever more sophisticated arms to Ukraine, training Ukrainian soldiers and giving them crucial intelligence. Ukrainians and Russians get killed, the US arms industry gets to sell weapons, not just to replenish the stocks depleted to arm Ukraine, but also to meet the increased demand of Germany and other NATO members, who have decided to raise their defence spending.

What if the West stopped arming Ukraine? It would be forced to sue for peace. Peace would come at a cost — Ukrainian neutrality, conceding Russian suzerainty over Crimea, which houses the base of the Russian navy’s warm water fleet, and possibly, fresh, internationally supervised referendums in the Donbas region to determine if Donetsk and Luhansk residents actually desire to be part of Russia.

Is a neutral Ukraine too big a price to pay for staving off global recession, the poverty and misery that it would cause in the less well-off parts of the world? It is a tradeoff that needs to be debated more openly and more widely.

It is not just principles of national sovereignty that deserve respect, compulsions of geopolitical power also must be respected.

For India, a world in which Russia remains a salient global power is preferable, by far, to a world in which it stands emaciated, drained of any potential other than to play second fiddle to China. In a world dominated by the US and China, India would lose strategic autonomy. China hungers for Indian territory, and to keep it at bay, India would have to accept whatever conditions the US sets in return for its support to ward off China.

With Russia around, and the West unable to focus its energies solely on China as its geopolitical rival, India stands a better chance of persuading the US and its allies that a strong India is the best instrumentality to keep China’s rise peaceful.

An end to the Ukraine war and, with it, terminating the sanctions against Russian gas, oil, and other commodities, including food and fertiliser, would cool prices around the world. Immigration would ease wage pressure in the US. The Fed would no longer need to ratchet up its policy rates, other central banks around the world would be free from the pressure to raise their own rates. That would counter the threat of recession, more than anything else.

But that, surprise, surprise, is not part of the IMF’s policy prescriptions.

The article was also published at The Federal as IMF’s partial outlook on October 14, 2022