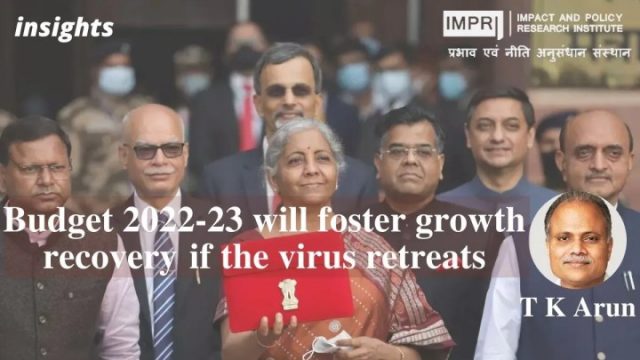 Budget 2022-23 gambles that investment-led growth would alleviate the economic distress wrought by the pandemic and an economy that was slowing desperately even before that, and, to that end, pursues growth rather than relief and doles with its debt-fuelled expenditure.

Total expenditure is proposed to be 15.3% of GDP, lower than the stretched expenditure of 17.7% of GDP in 2020-21 and 16.3% of GDP in 2021-22, but distinctly higher than the average size of 12.76% of GDP in the Narendra Modi government’s first five years. The extent of total government spending, not just capital spending, determines the growth-boosting impact of the Budget. On this score, the Budget does not score poorly.

Commenting on an interim budget prior to a general election in 1996, the Economic Times’ Swaminathan Aiyar wrote that a budget without tax changes is like a Harold Robbins novel without sex. The current Budget is a lot like that too, the only major direct tax proposal being the one to tax cryptocurrency gains at a flat 30%. Having slashed corporate tax rates outside the Budget in 2019 and (already) raised the effective income threshold for personal income tax, the government is in no position to cut taxes. Raising taxes at this juncture would eat into corporate confidence and disposable income. So that leaves only indirect taxes to change, leaving aside some clarifications and harmonizing of exemptions.

The bulk of indirect taxes is subsumed in the Goods and Services Tax, decision-making over which has been ceded to the GST Council. In any case, indirect tax rates can be changed by the Centre without obtaining Parliament’s sanction and the government routinely changes excise duties on petrol fuels to its advantage.

The trouble with steadily growing customs duties is not just that it signals a higher level of protectionism but also a higher level of government meddling in the economy. By pitching the import duty on some goods higher and lowering it on some others all the way to zero, the government is doing what it routinely accuses the Nehru-era planners of having done: deciding on behalf of economic agents which industry can grow in India and which cannot. Ideally, all goods, whether manufactured at present or not, whether raw material, component, or semi-processed good, should bear the same, uniform, low level of import duty, to ensure that every segment of an economic activity receives the same rate of effective protection.

This is a Budget predicated on the pandemic ceasing to be the affliction it has been on the economy these last two years. This underlies the virtually static outlay on health and the cutback on the provision for the rural employment guarantee scheme. Robust exports, healthy import of capital goods, and a gross fixed capital formation/GDP ratio that Advance Estimates put at 29.6%, the highest since 2014-15’s 30.1%, suggest that growth could indeed be recovering. Of course, it would still need to be propped up by elevated government spending and accommodative liquidity.

Elevated government spending has been budgeted for, supported by a fiscal deficit of 6.4% of GDP, high by pre-pandemic standards, but quite acceptable in the current world of Big Government across the pandemic-stricken world. States are being allowed additional borrowing leeway as well. This means that the overall fiscal deficit of the Centre and the states would be well over 10% of GDP.

Debt-fuelled expenditure by itself is not a problem, provided it generates growth at a rate higher than the rate of interest. If real growth materializes, the additional spending financed by borrowings would be met with additional output. Otherwise, the result would be higher inflation.

Project formulation, execution, and monitoring have to move up in quality, for spending to produce growth rather than inflation. For international investors to turn their capital tap towards Indian infrastructure, India will have to convince them that the surly refusal to honor international commercial arbitration awards — as evident in the disputes between Devas and Antrix, Amazon and Future, the government and Vodafone and Cairn over retrospective tax demands — is a flash in the pan, that future disputes would meet with a different fate.

If SarsCOVI2 has indeed stopped mutating to produce more virulent strains, and the pandemic recedes after the Omicron wave, the Budget could indeed prove effective in its growth strategy. To that extent, the government has produced a decent budget, with viral strings attached.

The article was first published in The Federal If the Virus deigns to retreat, Budget 2022-23 would Foster Economic Recovery on 2 February 2022.