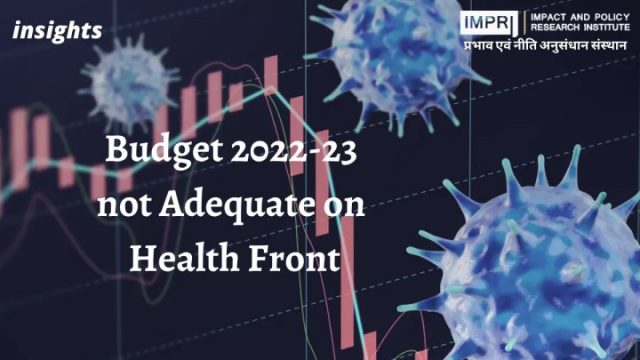 The pandemic has exposed the vulnerable health system of the country. However, how much the governing body prioritizes it has been a question for a long time. Seeking to uncover this, in light of Budget 2022-2023 presentation on the 1st of February 2021, Center for Human Dignity and Development (CHDD), IMPRI Impact and Policy Research Institute, New Delhi organized an important Panel Discussion on Population, Health, and Union Budget 2022-23 as a part of The State of Population and Development – #PopulationAndDevelopment series.

Devender Singh initiated the discussion with the broad overview of the budget which is becoming a vision document for the country and its economy as it lays out policies and programmes which are long term, spanning over several years. In this way the budget provides a glimpse into the views and priorities of the government. Health and Well Being pillar this year have been removed from being the first in the last year. Although there is a 16.5% increase in allocation for healthcare as compared the previous year, comparing it to the revised estimate for 2021-22, the increase is too small. These are possible signs of worry.

Prof Sanghmitra Sheel Acharya, called for attention on the zero allocation for emergency fund under the assumption that the pandemic is retreating. This is an overly optimistic approach given the uncertainty and literature on covid trend. Health sector was the worst hit by the pandemic leading to expenditure in health sector increase by about 73% from the pre-covid to pandemic year. Under this circumstance, this extreme optimism seems unwarranted as much of the development sector rests in health.

Additionally, she insisted on the efficient utilization of data generated on morbidity, mortality, vaccination to perform comparative analysis across regions, social groups, caste, and ethnic groups. Furthermore, she added that the workers and personnel at the lowest level who had greatest exposure to covid have not received any attention in the budget.

Pitching into the discussion Sandeep Chachra welcomed the recognition of mental health and tele-medicine in the budget, a vital problem that the pandemic had drawn attention to. Including the National Digital Database, he commented that these fresh moves are steered in the right direction, nevertheless requires closer analysis.

Moving on to the worrisome part he recapped the dire state of the economy triggered by the black swan event and the battles that the common people are continuing to face each day—joblessness, job loss, wage loss and unemployment. Revealing data from CMIE and the Economic Survey have clear evidence of the gloomy private consumption which has barely climbed up to 2017 level.  Budget has on the bright side increased governmental public spending, increasing demand through investing governmental resources in assets and hopes that the effect trickles down to create employment and finally improving wellbeing.

Moreover, there has been some restructuring of fund from vaccination to infrastructure which might improve the ransacked primary and community health care centres, and the state and district health facilities which will be a futuristic investment. Nevertheless, no new funding is concerning. He fears that the long-outstanding issues of health and well-being are falling apart.

Dr Shoba Suri, in utter disappointment remarked that the budget does not seem to be evidence based; it is not based on the ground reality and the existing socio-economic reality does not feature in. With a pandemic not yet completely gone, and growing poverty, anaemia, stunting and wasting, the allocation to the sector contradicts the need for the budget to look at the reality and envisage a budget incorporating it. The nutritional outlay has declined or is at most static and adding to the woe is the merger of Supplementary Nutrition Programme & Poshan Abhiyan. This is problematic as it is unclear how the funds will be distributed within them.

Further, taking a gendered perspective, she pointed at the neglect of women and child health. Though studies reveal that investing in maternal and child health yields almost triple dividend, the budget allocates only 0.5% of the entire budget to them. Additionally, she emphasised on the need to strengthen the existing nutritional program with sufficient monetary allocation to realise it without merely stating ambitiously that there would be an upgradation of the Anganwadis. She critiqued the lack of sufficient remuneration for frontline workers, and the neglect of adolescents who have been greatly impacted during the pandemic. In her view there is clear absence of vision or planning health in the budget.

Urvashi Prasad reiterated on the fact that any amount of increase that we see is sufficient as health has been chronically underfunded historically. Though the digital element is an important enabler in health if implemented well, it is tied to the centre-State relationship. Procedural and administrative impediments and effective Centre-State relationship can obstruct the already insufficient allocation. Moreover, alluding to the significance of outcome budget, she was of the strong view that how the tangible effects of schemes come back into the scene and reorients, and shapes future allocation and decisions is critical.

Prof Pradeep K. Panda further highlighted the budget’s historical style of according less priority to health. This year’s allocation is less than 2.1% of the GDP if we accounted for inflation and growth. Also, the share of health expenditure as a percentage of overall government expenditure was 2.37% last year (excluding vaccination) and is 2.26% this year.

This is opposed to the National Health Policy’s benchmark of 2.5% and WHO’s 5%. The marginal increases the budget outlay also forces the state to shoulder much of the burden of attending to the health sector. Besides, the National Digital Health ecosystem and National Tele-Mental health program will together help in providing universal access to health. It is crucial to address the problem of digital divide if this must have far-reaching impact without any exclusion.

In conclusion, there was consensus on the insufficiency of the budget allocation to the health sector and the budget being un-pandemic budget during pandemic times. The optimism of have overcome the pandemic is clear in the budget which is bothersome. The nutritional issues are accelerating, and this disparity is not even across groups.

Thus, there is need for data and intervention to address the diversity of the issue. A case for the covid warriors—from anganwdi, frontline, ward, sanitation to crematorium workers burial ground workers—was also proposed, for whom dignified wages and suitable compensation should be directed in view of the noble work they do.