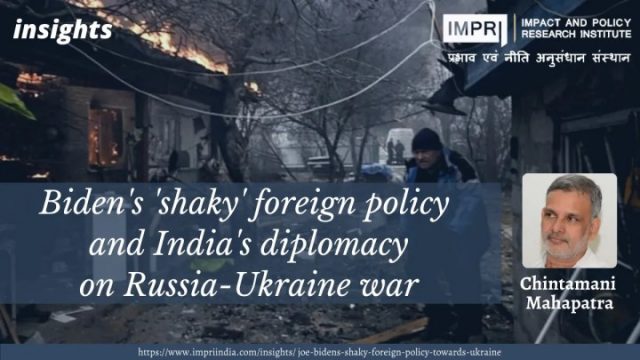 The Biden Administration’s methodology towards the Russian military action against Ukraine has been shaky throughout. It is thus surprising that President Joe Biden has called Indian policy “shaky”.

Russian President Vladimir Putin ordered the Russian army to move into Ukraine months after deploying troops along the Ukrainian border and holding provocative military exercises. Second, the strong military response of Russia against Ukraine came years after President Putin repeatedly voiced his opposition to the expansion of the North Atlantic Treaty Organization’s membership to countries bordering Russia. Third, President Biden himself kept repeatedly informing the world through statements about the imminent Russian invasion of Ukraine a couple of weeks before Moscow announced its “military operations”.

The White House was well aware of the US intelligence assessment of the danger involved in making Ukraine a member of NATO. Current Director of the Central Intelligence Agency William Burns himself had cautioned against NATO expansion to the doorsteps of Russia years before he assumed his current position.

Despite all relevant and related information, why has the Biden Administration failed to prevent the Ukrainian war? Was it because of the inability of the administration to correctly assess the determination of the Russian President to deny Ukraine its ambition to embrace NATO? Could NATO have much earlier fulfilled the desire of the Ukrainian leadership to join NATO to feel more secure and stable? If smaller countries, such as Estonia, Latvia and Lithuania, could be made NATO members, why was Ukraine considered unqualified yet? Would it not have worked as deterrence against Putin’s military adventure into Ukraine, if only NATO had made it a member in time?

One can understand the legal requirements and prescribed procedures to make a country eligible for membership in NATO. But it is also true that the real decision is taken on the basis of strategic planning and political motivations. Wobblier has been Washington’s response to Putin’s use of military means to prevent Ukraine from becoming a member of NATO. If Russian use of force has tremendously disturbed the stability and peace in Europe if it has challenged the viability of NATO as a security provider in the trans-Atlantic region, why has NATO refrained from militarily confronting Russia in Ukraine?

After all, Ukraine has been recognised as an independent country by the West and it borders NATO member countries, some of which have been affected by the refugee crisis. Could NATO military action against the Russian military in a third country be termed a direct attack on Russia under international law? Even here, the question is not of law but of strategy and fear of unintended consequences.

The reason behind the NATO members not acceding to the repeated request of Ukrainian president Vladymyr Zelenskyy to declare it a no-fly zone is not shrouded by secrecy. The US simply does not want to directly confront the Russian military. The logic is lucid and no country would like a direct war between nuclear weapon powers. The rationale behind providing veto powers to the Big Five members of the UN Security Council was similar — avoidance of direct military confrontations between major powers.

So, the Biden Administration wants to save Ukraine by punishing Russia! It has a coordinated sanctions policy against Russia along with most of its allies with the goal of raising the cost of the invasion to an unbearable extent. This shaky policy adopted in a piecemeal method has not been able to prevent the destruction of Ukrainian cities or alleviate the suffering of the Ukrainian citizens. Crippling the Russian economy will not enrich the Ukrainian economy! It has been almost a month since the war began. While there is no sign of Russian President Putin coming on to his knees and asking for compromise, there are frequent reports of massive damages to life and property in Ukraine.

The Ukrainian president has expressed his willingness to no longer seek NATO membership, is tired of asking for no-fly-zone protection and has begun to seek a direct dialogue with President Putin to resolve the differences and end the war. This is exactly what the Indian position has been from the beginning of the crisis that has led to a devastating war. India did not join other countries in condemning the Russian invasion. It called for dialogue and diplomacy. As the war-ravaged on, India demanded an immediate cessation of violence. India adopted the path of dialogue to implement a secure exit of its citizens from the war zone. And, India provided humanitarian assistance to Ukraine.

The Biden administration is supplying military equipment to Ukraine, expecting the people there to continue to fight the powerful Russian army that is feared by the Western powers themselves, asking other countries to support resolutions in the United Nations condemning Russia and expanding the scope of sanctions to cripple the Russian economy.

The result has been more death and destruction in Ukraine, high energy prices in the global market, deepening of the economic crisis of countries already reeling under the Covid-19 pandemic, persistent disruptions of supply chains, forcing countries to look for alternatives to SWIFT payment system and, worse, threatening the prospect of prolonged military exchanges in Ukraine.

Both Americans and Russians have witnessed the consequences of prolonged warfare in the Korean Peninsula, Indochina and Afghanistan for their own people and the locals. Sooner India’s position is recognised not as a “shaky” policy, in President Joe Biden’s words, but a sane approach to end the war, better would it be for Ukraine, Europe, Russia and, indeed, the world.