Home Insights How Regional Cooperation Could be Achieved with the Help of BIMSTEC? –...
Facebook
Twitter
WhatsApp
Linkedin
Email
Print 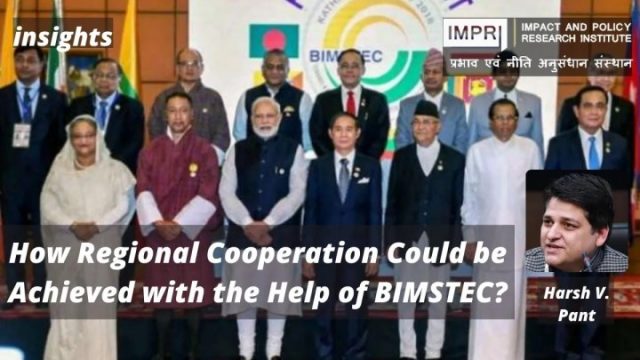 It’s been 25 years since the formation of the Bay of Bengal Initiative for Multi-Sectoral Technical and Economic Cooperation (Bimstec) in 1997. But it is only recently that the grouping has begun to gain traction.

The summit in Sri Lanka on March 30 is of particular importance since Bimstec is scheduled to adopt a charter for the first time that will lend a clear purpose to the organization and rationalize sectors of cooperation for better functionality.

Devoted exclusively to the Bay of Bengal region, Bimstec has been in the limelight of late with the rise in the Bay of Bengal’s strategic significance. It boasts of a membership encompassing all of the bay’s littorals – India, Bangladesh, Sri Lanka, Nepal, Bhutan, Myanmar, and Thailand – and is, therefore, ideally suited to be the platform for re-engagement to build a more collaborative future.

After the marginalization of the South Asian Association for Regional Cooperation (Saarc) since 2016 owing to tensions between India and Pakistan, a search for alternative regional collaborations led India to Bimstec. This grouping was poised to connect the Greater Himalayan region with the Bay of Bengal, as well as act as a bridge between South and Southeast Asia. It, thus, echoed India’s ambition of strengthening ties with its neighbors and creating a maritime identity for itself.

India’s responsibility is in sync with its focus on ‘Security and Growth for All in the Region’ (SAGAR), an extension of its Act East and Neighbourhood First policies. In 2019, building upon SAGAR, it announced its Indo-Pacific Oceans Initiative (IPOI), to support the building of a rules-based regional architecture resting on seven pillars. Among these, three pillars – maritime security, maritime resources, and disaster risk reduction – resonate particularly well with its role in Bimstec. The sector of cooperation on security embodies three sub-sectors: counterterrorism and transnational crime (CTTC), energy, and disaster management.

CTTC had already been under India’s lead, as had been the priority sector environment and disaster management. With energy, originally under Myanmar’s lead and joining the security bandwagon, India’s focus on non-traditional security concerns in the Bay of Bengal has become more holistic.

India visualizes itself as a ‘net security provider’ of the region, a term coined by Manmohan Singh in 2013 at a time when the country was aspiring to take a leading strategic role in the Indian Ocean while expanding into the Pacific.

The Bay of Bengal encounters a range of security concerns, from the natural to the man-made. Transnational concerns such as terrorism, sea piracy, undocumented migration, human trafficking, and illegal, unreported, and unregulated (IUU) fishing are just the tip of the iceberg. Their sheer multiplicity makes it impossible for any country to single-handedly address these concerns.

Within the security priority sector under India’s umbrella, a ‘shepherd country’ has been assigned for each sub-group that includes anti-money laundering and combating the financing of terrorism (Thailand), and human trafficking and illegal migration (Bangladesh).

But Bimstec continues to suffer from some serious challenges that include institutional fragility, the weakness of its secretariat, the paucity of consolidated funding, and the absence of clear guidelines.

Hopefully, the upcoming charter will resolve many of these, and the organization will be able to realize its true potential, especially in an environment that is evolving faster than the ability of the regional states to manage it. After all, Bimstec can only be as successful as its member states’ commitment to it.