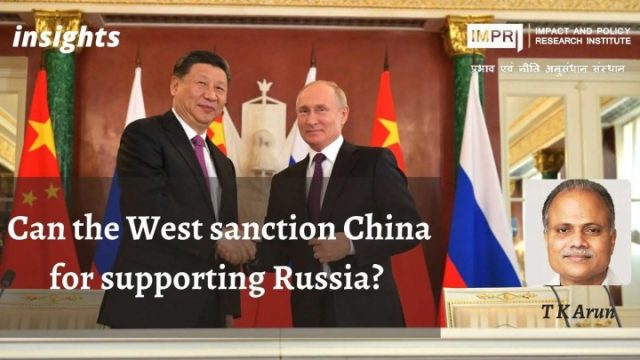 Sanctioning China would mean shutting down large swathes of global production, and if Chinese supplies are halted because of such sanctions, inflation would really go through the roof .

When United States President Joe Biden held a two-hour-long meeting with his Chinese counterpart Xi Jinping, the US media was told that China had been warned of serious consequences if China were to help Russia wriggle out of the effects of Western sanctions in the wake of Russia’s invasion of Ukraine. The European Union will have a summit-level interaction with Chinese leaders on April 1. Western media says EU leaders will back the US on its ‘warning’ on helping China. This is a bluff China will call, if push does come to shove, which itself is unlikely.

Here is why the West is not in a position to sanction China the way it has sanctioned Russia. Boycott of Chinese goods would send consumer prices soaring around the world, disrupt global supply chains, and get the incumbent leaders in the US, Europe, and elsewhere in serious political difficulty. Loss of the Chinese market would shave chunks of sales off Western companies, ranging from Apple to BMW through the luxury brands of France and Italy.

Attempts to restrict Chinese access to the dollar networks of New York would spell the end of the dollar as the dominant currency for settling international payments, even those that do not entail an American counterparty. Alternatives to the Society for Worldwide Interbank Telecommunications (SWIFT) would establish themselves at a rapid pace. The digital yuan would get a presence it otherwise would take years to acquire.

Dozens of countries in Africa and Latin America would defy any attempt to enforce any economic boycott of China, their biggest destination for their chief exports, minerals and farm produce. Discontinuity in the flow of Chinese finance would cripple many large infrastructure projects in the Belt and Road countries. Such disruption would accelerate the end of the post-World War II world order that has been holding up so far, although creaking at the seams.

China’s total exports last year amounted to $3.36 trillion, and imports, $2.69 trillion. In other words, China’s trade last year was larger than the total output of either Japan or Germany. China accounted for 48 percent of Australia’s exports. South Korea’s exports to China stood at $163 billion, a quarter of its total exports in 2021. Except for European Union member states, which trade mostly among themselves, China is one of the largest export destinations for the nations of the world, including the US. To sanction the Chinese market is to inflict extreme pain on their own domestic economies.

The lockdown in Wuhan following the outbreak of COVID-19 in 2020 had shut down car plants in several parts of the world, as Wuhan made sub-assemblies for various car parts that went into car production for various manufacturers. Sanctioning China would mean shutting down large swathes of global production.

Inflation has been at historic lows for much of the first two decades of the 21st century. Invoicing traded goods in US dollars, and a combination of rising productivity in China and the Chinese policy of holding down the yuan’s exchange rate with the dollar for much of the period, have contributed to low inflation. COVID-19-related supply disruptions are one reason for the recent spurt in inflation. If Chinese supplies are halted because of sanctions, inflation would really go through the roof.

China’s Cross-Border Interbank Payment System (CIPS) will gain traction on a scale it would take decades to achieve in the absence of sanctions, growing at the expense of SWIFT, from which most Russian banks have been kicked out, as part of retaliatory sanctions for Russia’s invasion of Ukraine, and its planned replacement.

In any case, the rise of cryptocurrencies, specifically, central bank digital currencies, is likely to put paid to the need for a messaging system like SWIFT. The distributed ledger on which cryptocurrency transactions are recorded is visible to all those who need to see the transfer of funds.

Sanctions on China would also lead to more and more trade being invoiced in the yuan, rather than in the dollar. If there is any effort to freeze China’s dollar-denominated assets held outside China, the tendency to move foreign exchange reserves out of the dollar would accelerate. Yuan, gold, and cryptocurrencies would rise as alternatives. Some commodities used in the manufacture of batteries and electric motors could also gain popularity as a store of value investment.

India would oppose such sanctions, not because India has any love lost for China. Anti-China sanctions would trigger a series of adaptations that make the yuan and the Chinese economy more salient and resilient than these are right now. Why would India welcome such a development?

There is too much at stake for the West to risk carrying through with any threat to sanction China, were it to actively assist Russia. What is really at stake for the West in Ukraine? The rules-based global order is the glib answer: after all, Russia is violating Ukraine’s sovereignty when it says it will not brook Ukraine joining Nato. It already violated Ukraine’s sovereignty when it took Crimea back in 2014, six decades after the Soviet Union had put Crimea and its naval base in Ukraine’s charge.

The US-led Nato has already expanded to several countries close to Russia, Poland, Hungary, the Baltic states, for example. There is little additional security to be gained from deploying missiles right on Russia’s border with Ukraine. The offer to expand Nato membership to Ukraine and Georgia in 2008 was made more to show to Russia and the world how powerless the successor state to the Soviet Union had become and how the West could dominate it. Abandoning such triumphalism is a small price to pay for putting an end to Ukraine’s suffering via a ceasefire, acceptance of Ukraine’s neutral status, and Russia’s right to the peninsula that hosts its warm water navy.

Sure, acceptance of neutrality would be a comedown for Ukraine. But that is far from the end of the road. Finland, an ally of Nazi Germany in World War II, accepted neutrality after the war, and has prospered since, both as a West-oriented economy and a democracy.

Ukraine, too, could follow in Finland’s footsteps, right from collaboration with the Nazis to shoot and kill hundreds of thousands of Jews and the Roma, to repentance, election of a Jewish president, Zelensky, and acceptance of neutrality to reach accommodation with Russia.

First published in the wire ‘Why the West cannot sanction China for its support for Russia‘ on 22nd March,2022.

Also written by author What will the world look like after the Ukraine crisis? at IMPRI Insights.

Also written by author Economic Repercussions of the Russia-Ukraine War at IMPRI Insights.