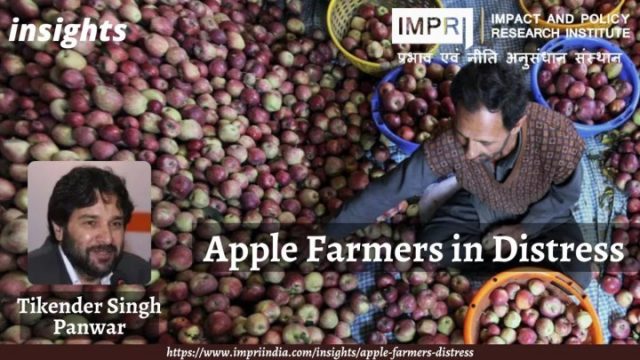 Apple growers in Himachal Pradesh are out on the streets some three decades after their last big agitation. The protests are not surprising; their anger has been simmering for a while.

To understand the present crisis, it is crucial to understand the developments of the last few decades. In the 1970s and 1980s, the state provided a lot of support to apple production in Himachal Pradesh: it set up nurseries and gave plants to farmers on a large-scale, offered a transport subsidy on cartons, provided heavy concession on tools, and offered special monetary help for the poor and Dalits to plant apple orchards, among other initiatives. Land reforms were widely implemented since the inception of the State; hardly anyone was left landless. Even before statehood was granted, land was distributed through Nau Taur (breaking new land).

Any land tilled was eventually transferred to those tilling them, through successive land settlements. Laws in the State restrict the transfer of land in favour of a person who is not an agriculturist of Himachal Pradesh. In the late 1980s and early 1990s, peasant movements were successful in raising the support prices for apple.

However, in the 1990s, with rising fragmentation of land, low productivity and withdrawal of state support, agriculture became unsustainable. The cost of production of agricultural items increased substantially, denying remunerative prices to the poor and marginal growers.

There are two major reasons for the current crisis. The first is the increasing cost of production. The input cost of fertilizers, insecticides, and fungicides has risen in the last decade by 300%, as per some estimates. The cost of apple cartons and trays and packaging has also seen a dramatic rise. In the last decade, the cost of a carton, for instance, has risen from about ₹30 to ₹130. The cost borne to market the produce has also risen.

The second and immediate trigger for the agitation was the increase in the Goods and Services Tax on cartons from 12% to 18%. This was done to ensure that farmers are forced to sell their produce to big buyers instead of selling it in the open market.

Just as the three farm laws were designed on the pretext of getting rid of the middlemen, the argument here was that commission agents, who fleece the apple growers, will be forced to exit the picture. But this leaves the apple growers at the mercy of large giants in procurement, who have precedence of even deciding the procurement price.

Large players do not buy apples in cartons; they procure them in plastic trays and decide the rate on the basis of kilogramme. By doing this, they argue that the cost of packaging gets reduced. It is true that it does — in the open market, the price is decided on the basis of an apple carton. In this manner, the big players induce the apple farmers to sell the produce to them. But there is a catch.

Unlike in the open market, where apples of all varieties/grades are procured, the large players only procure apples of high quality. Such apples don’t constitute even 20%-30% of the total production in a harvest. So, what happens to the rest of the apples? There is no answer.

As soon as the big players declare their procurement rates, they crash the market and bring in a substantial fall in the procurement prices across the market even though they don’t procure even 5%-7% of the total produce. Unlike in Jammu and Kashmir, where there is a minimum rate for procurement, there is no such law in Himachal.

The government also does not seem prepared to bring in such a law. The farmers are demanding that legally guaranteed procurement at a Minimum Support Price (C2+50%) should be ensured to improve their condition.

Need for a regulator

The government seems to be functioning under the pressures of big buyers. It doesn’t seem to have the capacity to tame the market or even decide what should be the minimum procurement prices for apples of different grades. What is required is an independent body that is duly supported and trusted by the farmers. Such a body should have representatives of apple growers, market players, commission agents and the government.

This must be a statutory body that is also given the task of conducting research in the apple economy. If this is not done, the economy of over ₹5,500 crore will be severely hit. The big growers or the rich peasants will be able to buffer the pressure, but the small and marginal apple growers will be impacted deeply and thrown out of this ecosystem.

The big growers have also started to shift from the conventional varieties to more genetically modified varieties called the spur, most of which are imported from European nations. How this transformation will unfold is yet to be seen.

This article was first published in The Hindu as The crisis of Apple farmers on September 12, 2022.