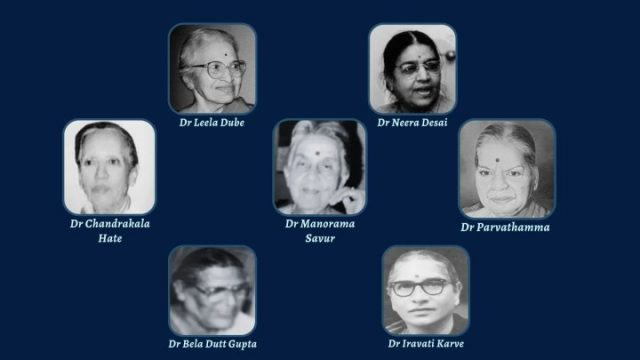 A Special #WebPolicyTalk on The State of Gender Equality – #GenderGaps series on “Tokens, Symbols or Incipient Feminists?: The First Generation of Women Sociologists in India”, July 26, 2022

The online event on the theme ‘Tokens, Symbols or Incipient Feminists? : The first Generation of Women Sociologists in India’ commenced on 26th July 2022 which is an initiative of Gender Impact Studies Center (GISC), IMPRI Impact and Policy Research Institute, New Delhi under the #WebPolicyTalk series of The State of Gender Equality – #GenderGaps

Inaugurating the session at 4:00 PM , Zubiya Moin welcomed the speaker and participants to the program, followed by an introduction to the eminent panelists.

Commencing the program, Prof Vibhuti Patel made her opening remarks welcoming Prof Kamla Ganesh, Feminist Sociologists and then greeted Prof Ratna Naidu and the editors of book ‘Reimaging Sociology in India: Feminist Perspective’, Dr Gita Chadha and Dr. Joseph M.T. along with Prof Arvinder Ansari and also welcomed all participants. She set up the stage by making us familiar with women sociologists and their works.

After the opening remarks, Dr Gita Chadha spoke in context of book referring to theme that any work in feminism is attributed to retrieve voices of women who are being marginalized and their works in sociology was not made visible and appreciated. She talked about the issue of women participation in sociology referring that many female students are being seen at the undergrad level of sociology but not in higher levels and the other issue that works on feminism are being associated as less intellectual and more of activism. She emphasized on how ‘Gender’ can be looked upon more conceptually and theoretically not just in works on feminism but in discipline of sociology.

Giving a brief summary of the Chapters in particular section, Prof Kamla Ganesh gives introduction about the book in the very first chapter and in chapter 2 she highlights the work of Prof Neera Desai : intersecting terrains of sociology, history and women’s studies tied up with egalitarian politics and gender equality followed by summarising a chapter on the work of C. Parvathamma being referred to as the sociology saga and highlighting her work on equality, polarization of castes, reservation and development of vulnerable groups. The next chapter maps the work of Prof Ratna Naidu : Critique of Parsonian action Theory, Ethnicity,secularism,communalism , contribution to urban studies.

She made the remark that the first woman in India entered sociology 50 years later and sociology study is much older than study of feminism.  She commented on Prof Gita Chadha and Prof Joseph M.T. that their book engages with feminist sociology theoretically and methodologically using their tools of location and sexuality and it indulges us to think over the plurality in gender, feminism and sociology. She told importance of writing about women who entered sociology in pre-feminist era. Also, she talked about early women in sociology and significance of their works.

Prof Arvinder Ansari, Director, Centre for Study of Social Exclusion and Inclusive Policy (CSSEIP), and, Professor, Department of Sociology, Jamia Millia Islamia, New Delhi brought up the point that the works of early women in sociology by whose work they seem us to be feminist is of great significance and these women who do not consider themselves feminists actually seems to be feminists because the patriarchal voices they mentioned in their work.

Their writings are mostly based on their real-life experiences. She told us that all these eight biographies are examples of how women balance their personal and professional lives in these patriarchal society and all these women provide us how to see societal norms from a different perspective and they brought in a new domain of knowledge in sociology.

Intervention by Dr R. Indra (a contributor of chapter 3)

Being a student of Prof C. Parvathamma, Dr R. Indra brought up her memories with her.  She emphasised on three things taught to her :  (i) not to say ‘I don’t know’  (ii) not to say ‘I can’t do’ and (iii) She got angry when being said ‘I am scared’ .  Also, she said that her professor encourages students to go and meet people and discuss with them. Often Prof Parvathamma  was criticised because she didn’t encourage polarisation.

She told us about her two experiences: came back in India in late 60’s , my mentor asked me why I am working on feminist issues and some years later I received a letter asking to speak on women’s issues, then mentioning that she didn’t do any such research on this topic but accepted and delievered the lecture and second time I was invited to write paper related to this topic . She said that roots of feminism are scared beliefs about women in religion. She is contented by the fact that today’s young women have more freedom and are at good position compared to women during her young age.

She emphasized that her generation has been benefitted from sacrifices of earlier women. She agrees that sociology has significantly contributed to works of women issues and castesim.

The last round of discussion on future of feminist sociology included remarks by Prof Kamla Ganesh as she questioned that do women sociologists really need to write alone on feminism. Lot of women sociologists wrote about other topics also but  the women’s issues naturally come in between them.  Among these eight there were some more famous only in their regions because they wrote in their regional languages and emphasized the importance of spousal support.

Remarks by other Prof participants gave significance to the works of earlier women as they said that “We are standing on the shoulders of giants”. Women face double struggle in every field. Closing remarks were given by Prof Vibhuti Patelas she summarised and talked about the work of earlier women.

Youtube Video for Tokens, Symbols or Incipient Feminists? : The first Generation of Women Sociologists in India