Home Insights An End to the Blame Game and Sanctions on Food from Russia...
Facebook
Twitter
WhatsApp
Linkedin
Email
Print 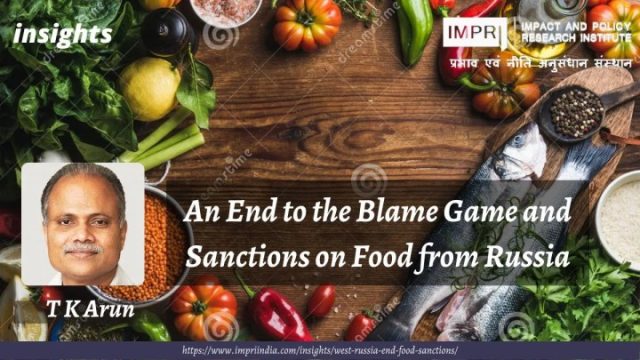 Russia, the largest exporter of wheat in the world, must be allowed to export its grain to cool food prices and interest rates and boost global growth.

Three things must be taken into account. One, Europe continues to be the biggest financier of Russia’s war effort because European countries continue to buy Russian gas and oil. Sure, they have decided to phase out purchases of Russian oil that are not delivered through a pipeline, but it is not easy for them to stop buying Russian gas in the near future.

Three things must be taken into account. One, Europe continues to be the biggest financier of Russia’s war effort because European countries continue to buy Russian gas and oil. Sure, they have decided to phase out purchases of Russian oil that are not delivered through a pipeline, but it is not easy for them to stop buying Russian gas in the near future.

There are severe limits on how much Russian gas India or China can buy, even if they wanted to. Gas has to come through pipelines or LNG terminals. The pipelines in place are already pumping gas to China as much as they can. LNG capacity has been fully utilised, given the gas shortage from the beginning of the last winter, long before the beginning of the war in Ukraine on February 24.

Fresh liquefaction plants, shipping terminals, regasification plants in importing nations, and LNG tankers, kitted out to transport liquefied gas at low temperatures and appropriate pressure, will have to be built to transport extra gas without the help of pipelines. This will take time. Italy and Germany depend on Russian gas and continue to import large quantities from Russia, paying higher prices because of the spike in gas prices.

The second factor to be highlighted is that to the extent India and China buy Russian oil, they help stabilise global oil prices. So if the average Joe in the US suddenly turns eloquent in a language register he did not pick up in Sunday school, whenever he takes his truck to the gas station to fuel up, it is helpful to bear in mind that his decibel levels would be even higher if India and China did not buy Russian oil.

Even if we concede the logic that Europe has to penalise Russia for its invasion of Ukraine, it does not justify the blockade of grain exports from Russia.

If Europe can continue to import oil and gas from Russia, even as they have imposed sanctions on Russia, why would they not allow the World Food Programme to import wheat from Russia? They blame Russia’s blockade of Ukraine’s Black Sea ports for the inability to export Ukrainian grain. In fact, Ukraine has mined the Odessa port to thwart Russian naval forces. Ukraine is certainly entitled to fortify its ports against external aggression.

Russia is not a major exporter of wheat alone. Like Ukraine, Russia is a major producer and exporter of sunflower oil. In addition, it is one of the largest exporters of fertilisers, corn, and barley. All these exports have been throttled by Western sanctions, raising food prices now and in the next crop season, as well.

Higher oil prices affect food prices, too, and not just through higher transport costs. As oil prices rise, more corn gets diverted to the production of ethanol. This lifts the price of corn. Corn is a major component of chicken feed. Chicken becomes more expensive, in turn. Along with edible oil prices, oil cake prices also go up. That puts upward pressure on animal feed. Milk and meat prices go up soon enough.

It is high time India led other developing countries to collectively demand that the West exempt food of all kinds from their sanctions on Russia. If Europe can exempt Russian gas from its sanctions, it can very well exempt food that matters even more for the developing world.

Let us put aside the sanctimonious blame game by the West and demand an end to sanctions on food.

First published in Moneycontrol as ‘West must put aside its sanctimonious blame game, and exempt food from Russia sanctions’ on June 28, 2022.