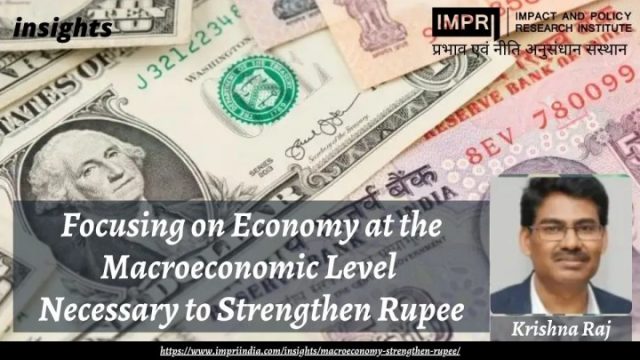 The exchange value of the Indian rupee against the US dollar in the international market has witnessed a slide in recent years, affecting the economy and international money transfers. The strength of the rupee in the global foreign exchange market is fast dwindling as the relative strength of the Indian currency against the dollar has dropped by 5.9 per cent this year. It means that more Indian rupees must be given up for buying a dollar.

The rupee’s slide against the dollar signals the symptom of weak macroeconomic fundamentals. Among the macroeconomic variables, interest rate, international trade, inflation, public debt, unemployment and investment are the main indicators of the health of the economy. The main characteristics of the exchange rate behaviour of the rupee versus the dollar are rooted in these fundamentals. The inadequate action of the government and the RBI has allowed the worsening of macroeconomic fundamentals, including the plummeting of the rupee against the dollar. The rate at which the rupee is falling signals possible dangers for the Indian economy in the near future.

The exchange rate volatility is directly influenced by international and domestic economic fundamentals as well as happenings. Internationally, high crude oil prices and high dependence of India on oil imports have adversely affected the value of the rupee in the free-floating exchange rate system. India meets 85 per cent of its energy needs from crude oil imports.

It is the third biggest oil importing country in the world, with 212.2 million tonnes of crude oil, which demanded an import bill of $119 billion during 2021-22. The Brent oil prices have risen to $110 per barrel, raising the demand for the dollar because oil is sold in US dollars in the international market. A lower-valued Indian currency has made imports more expensive. Even though the rupee’s slide helps exports, India is hurt by its high dependence on imports.

Domestically, India is already facing the highest recorded current account deficit of $9.6 billion, which is equivalent to 1.3 per cent of the GDP. The current account deficit may increase with weakening of the rupee. Further, the high fiscal deficit of 6.4 per cent of the GDP makes India rely on an estimated external debt of Rs 152,17,910 crore in 2022-23, resulting in the highest interest payment of Rs 9.41 lakh crore or 29 per cent of the revenue expenditure, which will add fuel to the fire with the rupee’s depreciation.

Further, high retail inflation of 7 per cent and withdrawal of foreign funds worth $28.4 billion in 2022 by foreign institutional investors (FIIs) have been attributed to the slide of the rupee against the dollar. The pullout of investment by FIIs is mainly attributed to the low return on investment or plummeting profitability owing to the increasing cost of production. Apart from profit, the FIIs prefer a strong and stable macroeconomic performance of the country to invest their capital.

This data shows that on the one hand, the weakening of the purchasing power of the rupee costs imports high in the global market and on the other, the high inflation rate lowers the currency value of the rupee, resulting in a high cost of living. As a result, both the cost of production and cost of living are rising, making profits plummet for the industry and investors.

The economic crisis may gradually worsen unless the downward spiral of the rupee is halted by policy intervention. A fall in the rupee’s value will worsen the balance of payment, hurt international trade, trigger further inflation, impoverish the profitability of the industry, increase the cost of living, burden Indians going abroad, result in high interest payment on external debt, create high rate of unemployment, lower foreign direct investment, weaken international money transfer and disrupt effective demand.

A timely and tight-roped policy intervention of the Central Government and the Reserve Bank of India may halt the rupee’s decline against the dollar through managed or pegged floating exchange rates. More importantly, inflation in India needs to be tamed. The Central excise duties on petroleum products such as gas, diesel and petrol are still high and they need be reduced to ease inflation. The RBI has comfortably maintained foreign exchange in dollars to the tune of 49 billion and foreign exchange reserves of $600 billion. The RBI’s intervention will help stabilise the currency’s value by selling matching dollars held as foreign exchange reserves as a short-term measure.

Therefore, the government and the RBI must make efforts to bring monetary stability in the foreign exchange market to enhance the value of the rupee. The RBI should ensure external stability of the rupee’s value to inspire confidence among the FIIs and NRIs because offshore currency and other financial risks fast spill over to the Indian market or economy in the globalised economy, which largely affects domestic macroeconomic fundamentals too.

Therefore, developing a strong offshore rupee exchange market will bring not only exchange stability but also reduce the international volatility of the rupee against the dollar. In this regard, the RBI needs to consider the recommendations of the ‘Report of the Task Force on Offshore Rupee Markets’ made under the chairpersonship of Usha Thorat to develop a strong on-shore and off-shore rupee exchange market that can act as a price-setter and absorber of shocks of the dollar on the rupee in the foreign exchange market.

This article was first published at The Tribune as Macroeconomic care a must to shore up rupee.

Read another article by Krishna Raj Rising Inflation in India: Stabilisation of Real Economy must be focussed up on in IMPRI insights.

Read another article by Krishna Raj Consequences of supply-side strategy to curb inflation in IMPRI insights.

Read another article by Krishna Raj Tax on the Ultra-Rich for Equitable Distribution of Wealth in IMPRI insights.