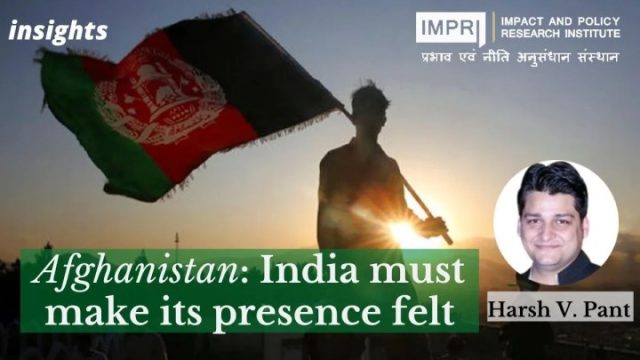 When the Taliban came back to power in Afghanistan in August 2021, there was despair in India about the future of India-Afghan relations and its impact on Indian security. Many deemed that moment a great victory for Pakistan and lamented India’s perennial inability to shape its strategic environment. The West threw the Afghans, who had since 2001 started believing in the mythical commitment of the West to democratic ideals, under the bus and moved on, while the regional states were left to fend off the challenges emanating from the tumultuous Af-Pak border.

But, as one phase of that Great Game reached a denouement, another phase began in Afghanistan. Contrary to what Francis Fukuyama argues, history never really ends. It takes a different form and hue, forcing us to recognise its force and adjust accordingly. And, it has been a long adjustment over the last 10 months for the Taliban, ordinary Afghans, and regional stakeholders, including New Delhi.

Earlier this month, an official Indian delegation led by joint secretary JP Singh of the ministry of external affairs visited Afghanistan — the first such engagement since the Indian Embassy in Kabul was evacuated in August 2021 after the Taliban’s entry into the Afghan capital. Singh met the Taliban’s acting foreign minister Amir Khan Muttaqi and the Indian government is reportedly considering the resumption of its diplomatic presence in Afghanistan.

During the visit, the Taliban raised this issue as it underscored its preference for an Indian diplomatic presence. Suhail Shaheen, chief of the Taliban’s political office, made it explicit that the Taliban “ asked the Indian delegation to reopen its diplomatic mission in Afghanistan” with the Afghan government “committed to providing a secure environment for its normal functioning.”

New Delhi, for its part, has kept the focus squarely on the humanitarian side of the engagement by underlining that the recent visit was largely about ensuring proper delivery of humanitarian assistance to the Afghan people. The Indian delegation pointedly visited the Indira Gandhi Children’s Hospital in Kabul, the Habibia High School, and the Chimtala Electricity sub-station — projects where Indian assistance produced substantive results for the Afghan people on the ground. India’s Afghanistan policy has always been centred on the well-being of ordinary Afghans and this perspective has little to do with who runs the government in Kabul, but the long-term equations between the two peoples with a longstanding civilisational relationship.

It is this humanitarian spirit that made India one of the most visible actors with New Delhi supplying 20,000 metric tonnes of wheat, 13 tonnes of medicines, winter clothing, 500,000 doses of Covid-19 vaccines to Afghanistan, as well as one million doses of Covid-19 vaccines for Afghan refugees in Iran. Given the scale and scope of the humanitarian catastrophe facing the Afghans, New Delhi’s engagement has been gradually widening for obvious reasons. This has enhanced India’s credibility in Afghanistan and made it clear that even when India faces negative headwinds in the crisis-ridden nation, it has no intention of giving up on its commitment to help its neighbour.

But this expanding humanitarian outreach also now needs an Indian presence on the ground. If India continues to be one of the largest contributors to the humanitarian efforts in the country, there is no reason for it to only rely on multilateral organisations for the distribution of aid. It is also imperative for India to ensure that aid is reaching those who need it the most and is being distributed in an equitable manner to all groups and regions. In addition, India will have to stand up for its own principles of equity and justice when it comes to the management of its humanitarian assistance. Therefore, outreach to the Taliban becomes an important policy priority.

The Taliban, for its part, is also recognising that there is no getting away from India’s regional and global clout. Without substantive engagement with New Delhi, a more comprehensive global outreach is impossible. During the recent visit by the Indian officials, deputy foreign minister Sher Mohammad Abbas Stanikzai, said that “Afghan-Indian relations would move forward based on mutual respect and joint bilateral legitimate interests”, and “would not be influenced by other countries’ inter-rivalry.”

The Taliban has been keen to send this message to India for some months. The pressure on Afghanistan-Pakistan ties is growing with the Taliban trying to negotiate a so-called peace deal between the Pakistani army and the Tehreek-e-Taliban Pakistan (TTP). Though a ceasefire has been announced, the ground realities continue to be turbulent. The Taliban has continued to defy Pakistan by giving a haven to TTP and making strident claims on the Pakistan-Afghanistan border.

It is not surprising, therefore, that it is reaching out to India. New Delhi today has an opportunity to reset the terms of engagement with the Taliban on its own terms. Greater engagement with the Taliban will create new possibilities for India as other regional players such as China, Russia and Iran look for ways to step up their engagement. The Taliban continue to be as regressive and repressive as its previous avatar, but India and the world have changed.

New Delhi should continue to underline its commitment to the Afghan minorities and women, and work with the wider international community to hold the Taliban accountable. There is no reason why it should shy away from making its presence overtly felt in Afghanistan.

This article was first published in Hindustan Times as Afghanistan: India must make its presence felt on 16 June 2022.