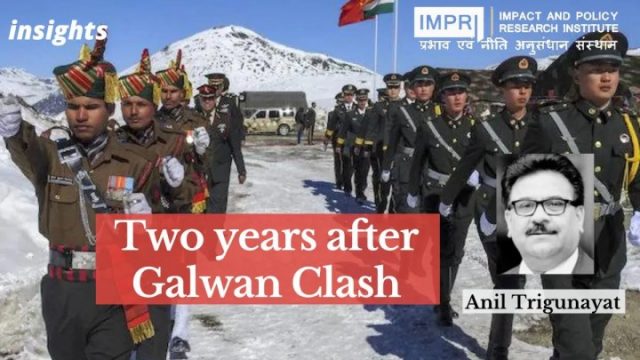 Galwan has indeed been a game changer between India and China. Chinese aggression and death of 20 Indian soldiers (on June 15-16, 2020) changed the bilateral dynamic that has been stagnant for nearly four decades. The two sides often claimed that no shot had been fired on the LAC (Line of Actual Control) which has not been legally demarcated, but tolerated to keep the peace going between the two largest countries and economies in the region.

India followed a policy of competition with cooperation, while it remained sanguine and sensitive about its territorial integrity and sovereignty. Even Doklam was a wakeup call. It tried and continues to work on dialogue and diplomacy to resolve the bilateral issues. But a change has definitely occurred which is clearly evident that India cannot be cowed down and is ready to respond in an eyeball to eyeball manner.

It remains in a state of readiness as talks under various formats continue on the borders to boardrooms of diplomacy. But there is no doubt that India refuses to let the business as usual approach go on while the major irritants and threats remain alive and unresolved. Piecemeal approaches are no longer resorted to. It was clearly conveyed during the March visit of Chinese Foreign Minister Wang Yi.

India decried the Chinese expansionist One Belt One Road Project (OBOR) as it recognises its labyrinthine designs to keep India embedded in the South Asian loop alone. Its iron clad friendship with terror wielding regime from Rawalpindi and zero-sum games in Afghanistan and Central Asia cast doubts on the Chinese exhortations. In addition, India fully understands the “Chinese string of pearls strategy” and has embarked on its own Security and Growth for All in the Region (SAGAR) as it has emerged as the first responder from Sri Lanka to Maldives.

While China was busy with Corona spreading accusations and its wolf warrior diplomacy, India moved forward with its soft power of vaccine and medical diplomacy in the spirit of Vasudhaiva Kutumbakam (the world is one family) and share and care approach amid the global pandemic. A robustness of policy, leadership and resolve were evident as the Dragon was no longer in the room, but out in the open.

Although, there are clear redlines about Chinese hegemonistic behaviour, it has not prevented India from moving forward bilaterally through diplomacy or work with Beijing in the regional, plurilateral and multilateral formats where major international problems were confronted in the spirit of the relevant organisation while maintaining and flagging the fundamental issues and concerns in a deft and diplomatic manner.

It was evident in BRICS, which India chaired last and China is chairing this year and will soon be hosting the virtual summit or for that matter Shanghai Cooperation Organisation (SCO), which India will preside on in 2023 and recently held meetings and exercises of the RATS counter terrorism architecture. The same applied to RIC (the Russia, India and China) grouping. On the international stage China and India continued to cooperate at the COP26 and Climate change negotiations and issues working for the crucial interests of the developing countries.

On the Russia-Ukraine war both (India and China) pitched for diplomacy and dialogue and cessation of hostilities even as they had their nuanced unique positions, but the relationship with Moscow was not subjected to vagaries of the geopolitics. On the pandemic, both have been cooperating to work out on TRIPS waiver and equity on vaccines so that the poor and developing and least developed countries could have a predictable access to life saving drugs and vaccines.

For India, it is a fact at least as of now, China will remain a major challenge that cannot be wished away, but will have to be managed on a firm and equitable footing. Dependencies are there which have been visible since despite India’s counter measures of banning over 220 Chinese Apps and regulatory efforts the bilateral trade broke all previous barriers rising to nearly $125 billion.

India learnt rather quickly from the crippling impacts of the pandemic that it has to become a part of the regional and global value supply chains hence even as it activated the Quadrilateral Security Dialogue (QUAD) along with the US, Australia and Japan in an unprecedented manner, it focussed on economic dimensions, be it critical technologies, vaccine manufacturing or rare earths in an ever expanding menu of collaborative options.

The Spirit of QUAD has taken deeper roots from Free and Open Indo Pacific (FoIP) to it being a force for the “Global Good” as PM Narendra Modi called it, much to China’s discomfort. Similarly, as a currently non-permanent UNSC member, New Delhi showed its strategic autonomy umpteen number of times and all major issues ranging from the sudden Afghan situation and disruption to maritime security and counter terrorism.

Being her largest neighbour, the relationship with Beijing has to be calibrated to predictable levels with a medium to long-term dynamic strategy through ‘Atmanirbhar’, multi-alignments and dependable partnerships with continued focus on multilateralism as the new transitional world order begins to take shape, very likely in a Cold War 2.0 matrix, where India will have to play a sobering and alternate leadership role in the comity of “Nations for Strategic Autonomy”.

Meanwhile, Indian Foreign Minister Dr S Jaishankar has said that the relationship with China has to be predicated on three Ms – mutual respect, mutual sensitivity and mutual interests – which are its determining factors. Any expectation that they can be brushed aside, and that life can carry on undisturbed despite the situation at the border, that is simply not realistic. He also suggested an eight-point plan on how to manage divergences and differences while acknowledging mutual leadership aspirations and respect for it.

Unilateral change of status quo is not acceptable. The road is rocky, but a lot will depend on the Chinese designs and desperation.

This article was first published in CNBC TV 18 as How India and China’s equations have changed since the Galwan clash on 15 June 2022.