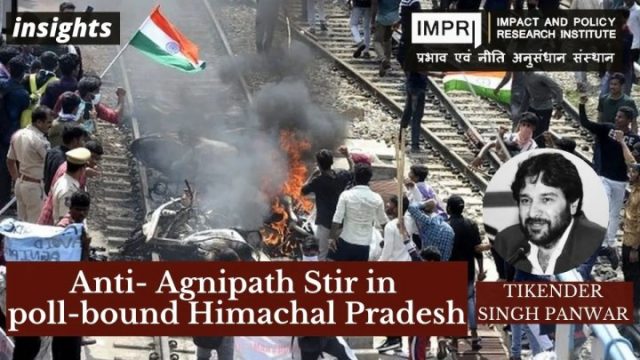 Himachal Pradesh, a state better known for its apples, has another interesting feature. Almost every house in some of the districts in new Himachal – Hamirpur, Kangra and even Mandi – has someone serving/retired from the armed forces, especially the Indian Army.

Agnipath, the scheme that the Centre announced on Tuesday for recruitment in the defence forces of youth between the age group of 17.5 years to 21 years on four year contracts, has drawn much ire from job aspirants across the country, including Himachal.

As protests erupted across the country, Prime Minister Narendra Modi was in Dharamshala, in Himachal Pradesh, on Thursday. A few weeks back, the PM was on a visit to Shimla. Himachal is scheduled for the Assembly polls in November this year. Modi has an old affiliation with the hill state as he was the Bharatiya Janata Party in-charge for the state for several years.

But the protests on Thursday at the Gaggal airport in Dharamshala before Modi landed have sounded the alarm bells for the BJP government in the state. Hundreds of youths protested against the Agnipath scheme. Reports from the districts said that hoardings erected to welcome Modi were burnt or torn apart by protesters.

Spontaneous protests were witnessed across the country, especially in the Hindi heartland, and reached southern India on Friday, including Telangana. Himachal Pradesh will likely see more protests in the days to come, which will make it difficult for the ruling BJP during an election year to contain the anger of the youth.

Himachal has a large number of people deployed in the Indian defence forces. According to an estimate, in a population of nearly 65 lakh, there could be ten per cent who are either serving with the defence forces or retired from the armed forces.

Over the years, a key demand of the state, which even the BJP raised incessantly with the Centre when P K Dhumal was the chief minister, was to have its own regiment. Like the Punjab, Dogra and Kumaon Regiments, Himachal has been pushing for this demand to have a Himachal regiment. The BJP championing the cause helped it find sizeable support in the state.

The valour of the soldiers of the Indian Army, and those from Himachal, is well known across the country and part of recent memory in Himachal. During the Kargil War, names like Vikram Batra, Saurabh Kalia and Sanjay Kumar were on people’s lips for their bravery in the service of the nation. There were nearly 52 martyrs from Himachal during this war and of the four Param Vir Chakras, two were awarded to the proud sons of Himachal Pradesh.

During the period when I was leading the farmers’ movement in the state, I was completely shocked to see a large number of widowed women attending meetings in villages. Later, I came to know nearly 95 per cent of widows attending such meetings were those who lost their husbands while they were serving the country in the Indian Army. Hence, the Indian Army is part and parcel of the lives and livelihoods of lakhs of Himachali families, particularly in the districts mentioned above.

Therefore, the Agnipath scheme, and the protests against it, could hit BJP grievously in the weeks to come in the poll-bound state. Himachal, which has a very high percentage of educated unemployed who aspire to join the defence forces, cannot find a scheme like Agnipath palatable, particularly as two years of Covid-19 have worsened the joblessness in the state.

The gravity of the situation can be gauged from the fact that when Army recruitment is announced, young people, in lakhs, throng the venue from all parts of the state two days in advance. This is why the youth of Himachal are upset at the Agnipath scheme with its provision of a temporary tenure and will protest it vociferously.

As it prepares to create history by becoming the first party since 1985 to return to power in Himachal, the BJP’s ambition looks like an uphill climb if the results of the recent bypolls are any indication. The party lost all the four bypolls in Himachal in November – three Assembly seats and the Lok Sabha bypoll for the Mandi seat.

The party in Himachal is also divided into camps, with jostling between leaders and workers owing allegiance to Chief Minister Jai Ram Thakur, BJP chief JP Nadda, who hails from the state, and Union minister Anurag Thakur, the son of former chief minister P K Dhumal, and an MP from Hamirpur in Lok Sabha.

Hence, Agnipath could turn out to be an electoral disaster in the making for the BJP in Himachal.

This article was first published in Deccan Herald as Agnipath could singe BJP in poll-bound Himachal on 17 June 2022.

Roadmap for mitigating heatwave challenges| 13 May 2022