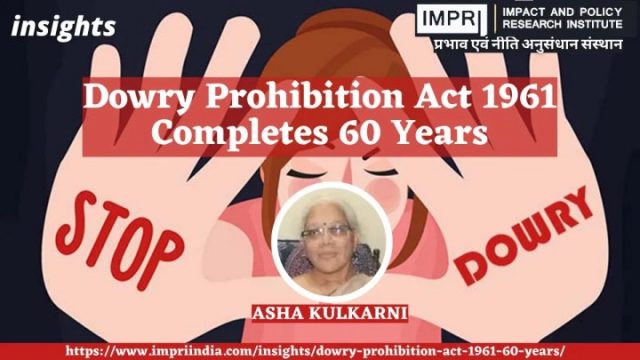 Sixty years ago, in order to eradicate the evil custom of Dowry from society and to eliminate violence against married women for want of dowry and Dowry deaths, “The Dowry Prohibition Act“ was passed. This Act received the assent of the President of India on 20th May, 1961 and the Act came into force on 1st July 1961. This date is important because giving or accepting of Dowry is prohibited after the commencement of this act. The act would be inapplicable if the Dowry has been given or accepted prior to 1st July 1961, even though the marriage takes place after 1st July 1961. In view of the above fact, on 1st July, 2021 this act completes 60 years. However, if we go back to history, about 250 years ago Punyashlok Ahilyaabai Holkar, the ruler of Malvaa Prant, passed the Anti-Dowry Act.

Giving or receiving Dowry was prohibited in the state under her jurisdiction. In some cases, she has given harsh punishment to the culprits related to Dowry offences; it proves that this evil custom of Dowry is centuries old. However, today, even in 21st century, we are not successful in eradicating this evil. Many families are destroyed and parents of marriageable girls are drowned in debts. One of the causes of social instability is the Dowry custom prevalent in our society. Due to the natural selfishness of the educated and slavish adherence to age-old customs & traditions of the uneducated, the sensitivity of the people has become so blunt that Dowry custom persists unchecked in our society. In Maharashtra State, more than 200 Dowry deaths are recorded every year. According to the authentic figures obtained through RTI Act 2005, during 2016-17, 2017-18 & 2018-19 there were 248, 234 & 214 Dowry deaths registered respectively.

It is a general presumption that educated working women in big cities like Mumbai who are economically independent do not face violence and atrocities due to Dowry custom, but figures from Dowry Cases prove that it is a false notion. In Mumbai city, 26 Dowry deaths are recorded in the first 10 months of the year 2018, in which 2 homicides, 16 suicides and 8 unnatural suspicious deaths are recorded. During the same period, 421 complaints are registered about harassment for Dowry demand. H. E. Governor of Maharashtra has mentioned in his message addressed to Anti Dowry Movement that “It is a matter of great concern that the evil custom of dowry is prevailing in our society even in the 21st Century.” There were  24,771 cases of dowry deaths in India during 2012-14.” This means 34 dowry deaths per day. This report is very alarming. “Dowry“ has been defined in this Law as “Any property or valuable security given or agreed to be given in connection with the marriage by one party to the other party before or any time after the marriage.“

The principle of Equality in the Indian Constitution is completely defeated when the custom of dowry is practised. Though marriage is a need for both bride and groom, however, only the bride is considered needy. Groom’s side enjoys a superior status in the marriage function, whereas the bride’s side is looked upon as low and inferior. It is customary that the bride’s parents should shower the groom and his family members with rich and costly gifts. This Act has a provision of specific punishment for five years imprisonment and a ₹15,000/-  fine to the offender who accepts dowry. If the amount of Dowry is more than ₹15,000/-, the fine will be increased accordingly. Moreover, it is prohibited by this law to demand a share in the property and partnership in the business as a condition of marriage. In case this rule is violated, punishment of minimum six months is provided. According to Section 4 of this Act, only making oral demand of dowry is a crime and if proved in the court of law, punishment of six months to two years of imprisonment with a fine of ₹10,000/- is provided. Section 4(a) says, giving an advertisement for marriage in the matrimonial column of a newspaper with such a condition is a crime liable for punishment of six months to 5 years imprisonment with a fine of ₹15,000/- will be given to the offender.

According to one important provision in this Act, if anybody other than the bride has accepted any dowry before, after or during her marriage the same should be given to her immediately or within three months from its acceptance, or else the person responsible will be liable for punishment of six months to two years of imprisonment & fine of ₹10,000/-. The court can give orders to the offender to transfer the dowry in the name of the bride; this provision explains the concept of “Stree-Dhan“. Further, the law says, if the bride dies before getting back the dowry from the offender the same will be given or transferred to her legal heirs. Dowry Prohibition Act 1961 is criminal law and according to section 7, offering and accepting dowry is a cognizable offence.  Cases can be filed on the basis of self-information by the victim, police reports, information from parents/relations or complaints registered by any NGO. The offence under this Act is non-bailable (bail can not be sanctioned to the offender)  and non-compoundable (the case once filed cannot be settled out of court).

According to Section 8(a), the offender has to prove that he is not guilty and that he has not accepted any Dowry and has not committed any offence under this Act. This rule is called “Strict Liability.“ According to the principle of Criminal Jurisprudence, an accused is presumed to be innocent until their guilt is proved, and it is for the prosecution to prove beyond reasonable doubt that the accused has committed the offence. This section makes an exception to this general rule and shifts the burden on the accused to prove his innocence. Amendment of the Indian Penal Code and the Indian Evidence Act are the special features of this Act, which makes the law more stringent. In the Indian Penal Code, Section 204(b) was included which provides the definition of Dowry deaths. In case a woman dies an unnatural death within seven years of her marriage and it is proved that before her death she was subjected to cruelty by her husband or in-laws it will be presumed by the court that the death is “Dowry Death”. In terms of the Indian Evidence Act, Section 114 provides minimum punishment of seven years of imprisonment and a maximum of life imprisonment to the offender.

Secondly, the Indian Penal Code section 498(a) defines Cruelty. This section has been amended to make cruelty to a woman by her husband or in-laws and forcing her to meet their unlawful demands of Dowry will attract punishment with imprisonment up to three years with a fine. Thirdly according to Indian Evidence Act Section 113(a) & 114(b), if atrocities and harassment is proved and the victim dies an unnatural death within seven years of her marriage, the Court will presume that she has been driven towards suicide by her husband and his relatives. In this situation, under IPC section 306 provision of 10 years of imprisonment & fine is made. After 1961 twice the Dowry Prohibition Act was amended: the first amendment of 1984 came into force on 2nd October 1985. In the definition of Dowry, the words “in consideration for the marriage of the said parties” have been substituted by the words “in connection with the marriage of the said parties.”

This change makes the definition of Dowry more specific.  The second amendment of 1985 came into force on 19th November 1986. This was made by substituting the words “dowry given or agreed to be given at or before or any time after the marriage” for the words “or after the marriage”  Both the amendments have made the definition of Dowry very vide and drastic. However, as per the Recommendation Committee’s opinion, it is highly impossible to prove the transaction of Dowry. It is obvious and for the simple reason that the parents, who are usually the victims, in the interest of the daughter would not say so, and would be reluctant and unwilling to set the law in motion, due to the fear that their daughter could be victimized. Though the Dowry Prohibition Act 1961 is very stringent, it has been proved to be ineffective, due to overall negligence in its implementation and lack of awareness. But the reasons also cannot be ignored:

In view of the above facts even after 60 years, we are not able to eliminate this evil custom of Dowry which is eating up the vitals of our society. Suicides of parents who cannot afford to pay Dowry and also of the girls who remain unmarried on this count are on the increase. Yet greed for money seems to have overpowered all constitutional values for which we fought our freedom struggle. Our beloved first Prime Minister, Pandit Jawaharlal Nehru, and his fellow parliamentarians passed this law with a great vision. To ensure the safety and security of women folk and to establish peace and prosperity in the society was the main objective to frame this Act. Public awareness is always more important and useful than enforcement. People should come forward and report the criminal offence to the Police. Alert citizens should not hesitate to be a witness in the Court of Law in Dowry-related cases. It is necessary to create legal awareness instead of relying upon law enforcement.

Watch Asha Kulkarni share her views on IMPRI #WebPolicyTalk on the Panel Discussion for the Destroy Dowry: Annihilation of Greed and Toxic Patriarchy in India.