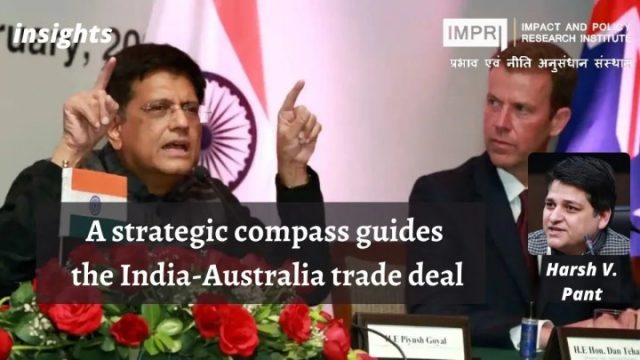 Last week, after 10 long years of negotiations, India and Australia finally signed the India-Australia Economic Cooperation and Trade Agreement in a virtual ceremony attended by prime minister Narendra Modi and his Australian counterpart Scott Morrison. Modi rightly described it as “a watershed moment for our (India-Australia) bilateral relations,” underlining that “consensus on such an important agreement in such a short period of time shows the mutual trust between the two countries.”

Morrison emphasized the pact as the single-largest government investment in Canberra’s relationship with Delhi, and given the impending elections in his country, suggested that “this agreement opens a big door into the world’s fastest-growing major economy for Australian farmers, manufacturers, producers and so many more.”

The interim agreement is expected to benefit several sectors in India, including textiles, leather, furniture, jewelry, and machinery, even as it lifts tariffs on more than 85% of Australian goods exports to India. It comes at a critical time as both India and Australia are reassessing their trade policies.

India is trying to establish its credentials as a country ready to do business with trusted partners and is busy finalizing a number of “early harvest” pacts. Australia is seeking to reduce its trade dependence on China by diversifying its export markets after being at the receiving end of Beijing’s trade weaponization.

In the past, trade was seen as a means of reducing geopolitical tensions. “Let us trade more and become friends” was the mantra of the past. Today, it is moving to a phase where nations want to trade only with friends and like-minded countries. Geopolitics is driving the trade and technology agenda, and it is this geopolitical convergence in the Indo-Pacific that is also driving the present upward trajectory in India-Australia relations.

The Indo-Pacific maritime geography is the fulcrum around which New Delhi and Canberra are mapping their strategic priorities. As Australian high commissioner to India, Barry O’Farrell, has cogently articulated, “our (India and Australia’s) geography places us squarely in the middle of the world’s strategic center of gravity.

And as the international system becomes more multi-polar, the region’s resilience will be tested.” Australia and India have, therefore, according to O’Farrell, accepted a shared responsibility to ensure a peaceful and inclusive Indo-Pacific where the rights of all states are respected regardless of their size.

Despite the differences over the Ukraine crisis, India and Australia remain committed to maintaining an upward trajectory in their relationship. A multipolar Indo-Pacific will remain a mirage without New Delhi and Canberra stepping up their geopolitical game.

What is interesting is that while this consensus has been there at the elite level, it is now percolating down as recent polling data shows how the public in India and Australia view each other as “trusted” partners. This belief in each other’s ability to shape the regional environment, thereby emerging as leading partners, owes a lot to the way in which top leadership in both nations view this partnership as essential to shaping the future of the Indo-Pacific. India-Australia relations have evolved rapidly over the past few years, with the two nations signing the Mutual Logistics Sharing Agreement, allowing the two nations to use each other’s military bases for logistics support improving military partnership.

The two countries also elevated their ties to a comprehensive strategic partnership in 2020, which is based on “mutual understanding, trust, common interests and the shared values of democracy and rule of law.” This is symbolic of their commitment to strengthen their engagement in the Indo-Pacific for the promotion of an “open, free, rules-based Indo-Pacific region supported by inclusive global and regional institutions.” This comprehensive strategic partnership encompasses regular high-level political, diplomatic, and military engagements, resulting in gradual accretion of trust at various levels.

China’s aggressive policy posturing, of course, has been one of the structural variables that have pushed the two nations to be more ambitious in their bilateral outreach. Amid this rising assertiveness by China, closer cooperation among like-minded nations has gathered momentum. For years, India has been trying to tread cautiously vis-à-vis China. Now, its calculations have changed. The choice to join hands and develop a stronger stance against China with like-minded countries no longer seems radical. For Australia and India, a stronger partnership is essential to achieving a “free and open” Indo-Pacific.

There have also been important institutional developments in the Indo-Pacific, foremost among them US president Joe Biden’s elevation of the Quad to the leaders’ level. When the idea of a Quadrilateral Security Dialogue was initially conceived in 2007, both New Delhi and Canberra were not willing to invest wholeheartedly in such a platform.

But when Chinese assertiveness went out of control from 2007-2017, the Quad was resurrected and since then, it has been a story of a dramatic rise. For the US, India, Australia, and Japan, the Quad provides a platform to underscore their commitment to common goals: a rules-based international order, freedom of navigation, and the peaceful settlement of territorial disputes. The rise of the Quad signals the acceptance, both within and beyond the member countries, of the “Indo-Pacific” as a strategic concept.

Today, the Quad represents a maturation in thinking by major powers in the region. And the agenda of the Quad today is wide-ranging to tackle common challenges such as Covid, climate crisis, lack of critical technologies, and terrorism by pooling in their unique strengths and molding the future Quad. As issue-based coalitions that are more flexible, ad hoc, and political in nature compared to formal alliances make their mark in the Indo-Pacific, strong bilateral ties between like-minded nations such as India and Australia will remain critical to shaping regional security architecture. With the recent trade deal, New Delhi and Canberra have signaled that they take this role seriously.