Home Insights Getting Old Before Getting Rich: Are we as a society and a...
Facebook
Twitter
WhatsApp
Linkedin
Email
Print 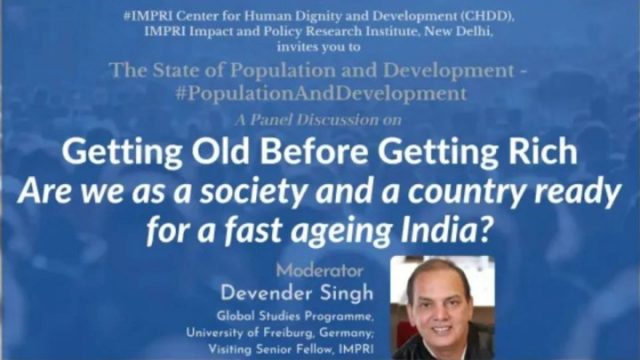 Ageing jumps out the key issue for India when one gleans through population trends and forecasts undertaken by different agencies including UN and government of India. COVID 19 has underlined this fact even more, with a thick red pen. With the passage of time as the demographic transition matures, ageing is going to assume even more significance.

Whenever there is some discussion on population, people’s main occupation is mostly restricted to the overall numbers when in fact, the focus should be on the make-up of these numbers. Even more importantly, the changes occurring in the numbers should be of our prime interest because therein lies the critical information for prospective planning of policies and programmes.

India is fast ageing into a big senior citizen society. This change in number of older persons is occurring faster in India compared to other countries; for example, doubling of older persons’ population from 7% to 14% took 110 years and 80 years in France and Sweden respectively, while it is projected to take only 20 years in India. From the 104 million older persons (of and above 60 years) in 2011, there will be 425 million in India by 2061 as per the population projections by UNFPA in 2018; a more than four-fold increase, as is shown in the graph below. Every fourth person in India in 2061 will be 60 plus.

What is even more worrisome is that India is going to be an old country before becoming rich. Being engaged in informal sector, most people in India will end up with almost nil or meagre savings and no social protection or pensions when they hang up their proverbial boots. A large proportion of them are economically fully dependent (52%) and partially dependent (18%) on others for livelihood.

Large number of older persons continue to work or forced to work because of economic conditions. The proof lies in the fact that 93 lakh individuals of age 61 and older availed work benefit under MGNREGA in 2019-20. We also need to keep in mind that approximately 90% workforce in India is in the informal sector, which has effects on savings and social protection in the old age.

Majority of these older persons will be living in rural areas, if we go by the current trends; as per the Census 2011, 70% of the older persons live in rural areas.  Life expectancy will increase, for females from 69.4 in 2011 to 79.7 in 2061 and for males from 66.0 in 2011 to 76.1 in 2061. Old women will outnumber old men, and many of them will be widows. A study by UNFPA (2012) shows that poverty rates are higher among the elderly and social security coverage is very low. The lack of care and support and limited coverage through social security provisions will leave them highly vulnerable to loneliness, ill-health and neglect.

There is an intersectionality between ageing and migration. Greying south will require young hands to keep its institutions running, maintaining the economic productivity and for taking care of the elderly while the north-central region will have high, and in all probability surplus, young working age population. There are already well-established migration routes between these regions. Demographic divergence will render further impetus to the migration. Kerala, for example, is already witnessing increased in-migration.

Increased migration of young people will affect older persons living in rural areas in the form of dwindling social support and care. On the other hand, remittances will help them have some financial resources at their disposal. Advancement in technologies too has helped in maintaining close contacts with families as well as ensuring support in quick times. There is another aspect of the intersectionality of ageing and migration – the issues, concerns and needs of those older persons who have to move with younger ones. More research needs to be done to understand their lived reality.

In such a scenario ageing and its intersectionality with migration assume added significance and require urgent attention and forward-looking planning. A population dynamics perspective is needed to start planning for the elderly in India i.e., planning for different states and regions will be different. Estimations and projections can help states to plan for required housing, health care and other facilities. States need to work together to provide portability of identity proof and entitlements, as well as build support systems for older persons left behind.

The New National Policy for Senior Citizens, 2020 by the Ministry of Social Justice and Empowerment does not adequately address the demographic diversity across states and lacks the bold high level vision for future to address the issues mentioned above.

Hence, there is an urgent need to create two taskforces at the NITI Aayog – on ageing and migration, with subject experts from the state governments, academia, organizations – public, private, non-governmental – working in the field of ageing and migration, to develop white papers outlining current and future situations, policy regime and implementation mechanisms in other countries, and recommendations for future course of action in India. The second step, based on the white papers, should be setting up separate ministries/independent departments with their own mandate, manpower and resources, for these two population groups.

Fast greying India is a reality, and prospective planning to ensure social security and social-health services through a population dynamics lens is the need of the hour if we don’t want older persons to be the last and lost persons.