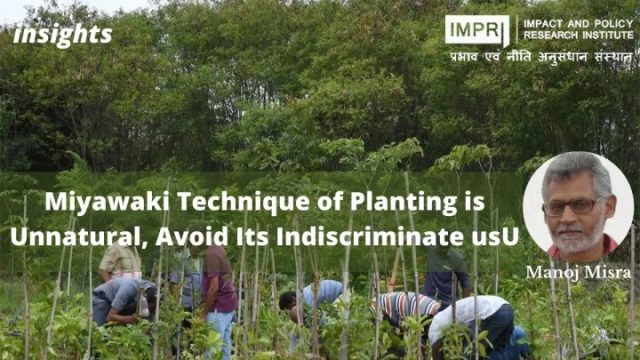 Miyawaki planting is unfit for nonmoist locations. What could be acceptable in moist temperate, subtropical, or island ecologies like Japan and similar latitudes would be most unwise in other latitudes, especially tropics, where water is climatically scarce or available unevenly over the year.

Imagine, you are one of the ten siblings compelled to share a one-room ‘home’ that your parents have managed to construct after great effort. In short, you are either a slum dweller or a resident in a small outhouse. While you were young, sharing the little space with others in the house was hard but okay. As you grew, a stiff competition ensued between you and the siblings for meeting the necessities of growing up like food, water, money for school uniforms, books, fees, transport, and most importantly, the need for your little space in one room home where you ate, studied, slept, kept your things, etc.

Enough elbow room, personal space, and meeting life’s other necessities became a matter of everyday struggle. This is because your parents had limited resources to meet the needs of all their children. Now a philanthropist came along and offered to handhold your family in terms of life’s bare necessities but with a condition. You have to live all your life in that one-room home only. What nonsense, you would say – ‘I have my individual needs which cannot be fulfilled for all times in this small single room’. Consider a parallel.

You are excited about a new popular way of raising trees and you plant ten seedlings of local tree species in one square meter area. You are quite happy when all of them begin to do well in the beginning. But soon you begin to worry when you find some of them with yellowing or wilted leaves and an absence of natural branching.

Unable to fathom the cause you consult an expert and you are told that the soil nutrients, water, and sunlight in that limited space have become a constraining factor and you should better start fertilizing the soil and water the area more often. And also look out for insects for the weak plants shall find it hard to keep them at bay. But what about the sunlight, you ask? Well, that is a limitation that your plants would have to learn to live with their entire life, including some growing too straight with suppressed crown width.

Strong survival competition is in play here. Very unfair and unnatural, you would think. I am sure by now you have fathomed that the latter is the ‘famous’ Miyawaki style of raising plants in small spaces. When we plant a seedling meant to be a tree we seldom bother about the plant and processes that happen underground and remain focused on what is readily visible overground. This is a mistake that needs a correction.

We, humans, are known to ‘fast’ and go without food over extended periods but the same is not true of water which we do consume while fasting for health or for religious reasons. The same is true of plants. They know that they can produce food at will using photosynthesis but even that cannot happen without water.

Clearly, water is an elixir both for plants and humans. Humans have been managing willy nilly to access it but for plants soil and the underground is the only source and is taken up in an intricate manner by the roots which again prefer the underground. It is also known that a plant, like many humans, takes available water supplies for granted. It transpires into the atmosphere 95 percent of all the water that it acquires from the underground utilizing just the remaining 5 percent or even less for meeting its physiological needs.

So for a plant to grow into a tree would require a humongous amount of water and if a number of plants happen to stand close together all aspiring for adulthood, the source needs to be water aplenty. In other words, groundwater can be lost quickly to the atmosphere, and aquifers are dried by such aspirational bands of seedlings planted together and closely.

This makes Miyawaki planting unfit for nonmoist locations. What could be acceptable in moist temperate, subtropical, or island ecologies like Japan and similar latitudes would be most unwise in other latitudes, especially tropics where water is climatically scarce or available unevenly over the year.

Methods are different but research has found that just like us, trees in a stand (social group) can smell, feel, hear, see and even talk. So there is no reason why like us enough ‘space’ for them would not be both a physiological and social requirement? This is what the Miyawaki method takes for granted.

It would also be interesting to know how seedlings in a Miyawaki stand to deal with insect attack, soil nutrient deficiencies, and drought conditions unless pesticide use, artificial fertilization and irrigation is part of the package. So if a Miyawaki stand is being raised like an agricultural crop with high inputs of fertilizer, irrigation, pesticides, etc then clearly it is a method that is not only unnatural but prohibitively expensive too.

Moreover, Miyawaki cannot claim forest-hood even ecologically just like a grain crop cannot be called a natural sturdy grass. And if carbon sequestration in the climate change era is the excuse for their raising, it is still questionable in the context of rapid groundwater loss and aquifer drying. Since Miyawaki forests seem to be taking the fancy of urban planners and even some foresters, let us not forget that all that glitters in the short term might turn out to be worthless and counterproductive fake ‘imitation’ in the long term.

Research has found that plants are truly large-hearted as social beings and cooperate with each other beautifully. But there is always a limit to anyone’s large-heartedness. Miyawaki stretches it unreasonably. Use your discretion wisely!

First published on Gaon Connection titled Miyawaki technique of planting is unnatural, avoid its indiscriminate use, on April 17 2022

Read another piece on the Forest survey by Manoj Misra, Why Does The Forest Survey Disappoint Everyone, Except Forest Ministry? on IMPRI Insights