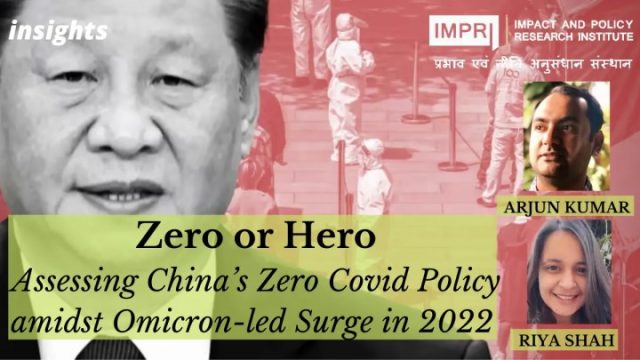 When the Covid- 19 pandemic first broke out in Wuhan in 2020, no one imagined that it would wreak havoc on such a large scale. With over 6.2 million lives lost, countless infected and new variants emerging, the pandemic is still raging all around the world. There is almost a united consensus amongst scientists, healthcare professionals and policymakers that the virus is going nowhere. This has led governments all over the world to move from the lockdown method to one living with Covid.

However, even after two years of the Wuhan outbreak, China has continued with its stringent Zero Covid policy. Initially, the strategy was successful in reducing transmission to near zero but as highly transmissible variants like Omicron are surfacing, this policy seems to be faltering beneath its own weight. The resurgence of cases in 2022 and the month-long Shanghai lockdown has again put to test the effectiveness of the ‘zero tolerance’ Covid policy.

Since the initial outbreak in January 2020, the Chinese government has implemented the policy of ‘dynamic clearing’, which aims to eliminate local transmission by employing aggressive large-scale control measures, lockdowns, mass testing, contact tracing and travel restrictions. When the first Covid outbreak broke out in Wuhan, the Chinese authorities implemented the same ‘elimination’ model, leading to the almost complete elimination of Covid-19 in Wuhan by May 2020, with only 300 asymptomatic cases. Outbreaks in other regions were controlled in the same way and the death toll in China up till March 2022 was around 4600 as per the official figures.

While the other countries also employed strict lockdowns, they were lifted as soon as there was a decline in the number of deaths and active cases. This response was in tandem with the ‘mitigation’ model where the governments responded to the crisis stringently at first, but as the danger eased, they shifted their focus to mitigate the human, economic costs and other broader impacts.

The steady disbursal of vaccines, improved testing and regulation, and development of hybrid immunity have led governments all over the world to return back to normal by easing Covid restrictions. In contrast, China has only witnessed two deaths between 15 May 2020 to 15 March 2022 and still continues to strictly implement its zero-tolerance Covid policy.

In early April, as the highly transmissible Omicron virus rummaged around China, it forced the 25 million-strong city of Shanghai into complete lockdown. China’s most populous city and economic hub turned into a ghost town almost overnight. With a massive resurgence in the number of active cases, a four-day lockdown was implemented on March 28, but due to increasing cases and its Zero Covid policy, the lockdown has continued indefinitely.

According to the state-controlled China Daily, Shanghai has been divided into lockdown zones, controlled zones and precautionary zones. With over 12 million people living in lockdown zones, this outbreak has put China’s zero-tolerance Covid policy to its gravest test. With around half of the above 80-year age group unvaccinated, and less than one-fifth being given booster doses, the Chinese government has adopted strict measures to curb the spread of Omicron, which has triggered the worst outbreak since 2020.

With cases surging in Beijing, the local government is also bracing for another Shanghai-style lockdown. The resurgence of cases can be attributed to the highly contagious nature of the Omicron variant, shortage of mRNA vaccines and the lack of hybrid immunity due to non-exposure to earlier strains. The head of China’s National Health Commission’s Virus Control Panel expert, Liang Wannian says that China will stay on track to actively build immunity through vaccination rather than adopting a mix of vaccine-induced and infection-induced immunity like other foreign countries.

Shanghai reported over 29,300 cases on April 1, this spurred mandatory mass screening, community control, rapid contact tracing and other prevention measures to tackle the outbreak and prevent it from spilling over to other provinces. During a State Council meeting, the co-ordinator of China’s Covid-19 response, Sun Chunluan declared that China will continue with the zero- Covid policy ‘without hesitation’. Many party officials from Changchun, Jilin and Shandong have also been sacked due to ‘ineffective performance’ in controlling the outbreak in Shanghai.

Moreover, there has been a massive public outroar against the inhumane implementation of the policy in Shanghai. As per the stories shared by residents of Shanghai on Weibo, people have been denied food and medical facilities, fenced inside their apartments, infants have been separated from their parents, pets exterminated and the understaffed malls and hospitals have been hanging by thread.

When people protested on their balconies against the lack of essential supplies, government drones blared, “Please comply with COVID restrictions. Control your soul’s desire for freedom. Do not open the window or sing.”  A six-minute audio compilation of Shanghai residents in distress titled, ‘Voices of April’ has also been circulating widely. Below is another small excerpt shared by a Weibo user:

Apart from taking a toll on the life of regular Chinese citizens, the mass lockdowns have also had serious economic impacts. As provinces accounting for up to 25% of China’s national GDP are under complete or partial lockdown, the faultlines of China’s one-size-fits-all Covid policy are becoming apparent. With businesses shut down and people confined to their homes, unemployment rose to an all-time high since May 2020, at 5.8% and retail sales fell 3.5%, the first decline since July 2020. There has been a sudden stop in all economic activities and the continued disruption of supply chains is likely to have far-reaching effects.

Two years ago, China was lauded by the WHO for the most ‘ambitious, agile and aggressive’ disease containment strategy. While many countries were waiting for vaccines and developing herd immunity, 1.4 billion-strong China proved that elimination was possible solely through strict isolation measures and quarantine. Moreover, drawing lessons from the previous SARS outbreak, China’s robust public health response proved effective in saving millions of lives.

Initially, there was a unanimous global outcry to blame China for leashing out the Wuhan virus. While China brought down transmission rates to almost zero by May 2020 and began hosting water park parties by August 2020, the situation elsewhere was quite bleak. Today after almost two years as other countries are returning to normalcy, we see China returning back to lockdowns. Ironically, the chain of events seems to come to full circle as China braces to curb its worst-ever Covid- outbreak since 2020.

Though adherence to the zero Covid policy comes with its own human and economic costs, the present leadership will likely continue with its tried and tested policy till the spread is contained. A hasty reversal of the policy would not only put into question the merit of the Chinese leadership but would also negatively impact public health and safety. There is an urgent need to address the shortcomings of the zero Covid policy and craft a balanced exit strategy to pivot away from zero-tolerance and move towards cohabitating with the virus.

Riya Shah is a researcher with IMPRI Impact and Policy Research Institute, New Delhi and a Bachelor’s candidate in Chinese Language at Jawaharlal Nehru University.