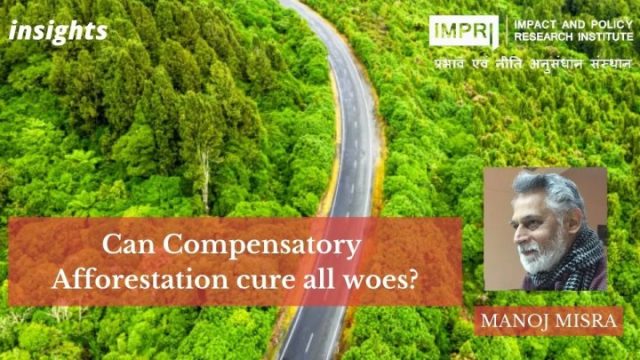 The National Green Tribunal (NGT) had constituted a committee to oversee the construction of the Dehradun-Delhi highway – a project that would require the diversion of 57 ha of forests and the felling of nearly 11,000 trees. Recently, the Supreme Court directed this committee to be reconstituted.

The Bench of Justices D.Y. Chandrachud and Aniruddha Bose agreed that the committee should have independent members and that instead of being chaired by the Uttarakhand chief secretary, it should be led by the director-general of forests.

A plain reading of the final two-page order of the Supreme Court, in the matter of Citizens for Green Doon v. Union of India, gives the impression that the order was based on a consensus that emerged among the parties and that the issue was amicably resolved.

However, what is not visible in the order is how the statutory process was circumvented in order to facilitate the construction of a highway that would lead to the avoidable felling of thousands of trees and set a dangerous precedent in terms of environmental decision-making in India.

It was Atal Bihari Vajpayee, the 10th prime minister of India, whose vision brought road networks in urban and rural India into the mainstream of the national economic growth agenda. Since then, the quality and the quantity of roads in India have gone from strength to strength.

But today, the Indian government has taken this initiative to another level: in addition to grandiose plans on laying new roads across the national firmament, almost every other existing road is also being expanded, upgraded or realigned – at large cost both to the nation’s exchequer and to its ecology.

This article is about a hilly 20-km stretch of the Delhi-Dehradun national highway, which bifurcates the densely forested Shivalik landscape that is bracketed by the Ganga and the Yamuna at either ends. The road for some distance also skirts the Rajaji National Park and even runs within its eco-sensitive zone.

A simple reading of the apex court’s order, dated April 19, 2022, seems to indicate that the matter at hand was straightforward. The NGT had already heard the issue and had disallowed the petition – but also formed an oversight committee to ensure that certain mitigation measures, suggested by the Wildlife Institute of India, had been properly implemented. In their appeal at the Supreme Court, the applicants raised an issue with the committee’s leadership and its lack of independent, non-government members.

There was also the matter of the low height of the planned flyovers and the inadequate compensatory plantations in lieu of the trees to be felled.

So the court, in a consultative manner, heard all the parties, took suggestions and decided to reframe the oversight committee, instructing it regarding the height of the flyovers and the compensatory plantations. The court also suggested that mitigation measures should not be diluted but, in fact, improved if possible. So far so fair, it seems – dig a little deeper into the concerned case file and you will find some serious issues.

Unfortunately, the apex court’s order follows a pattern that has been found in other cases involving environmental offences in general, and those against trees, forests, pasture lands, rivers and ponds, etc. in particular.

In the current case, a road-widening and upgradation proposal involving the states of Uttar Pradesh (16 km) and Uttarakhand (4 km) planned to convert an existing two-lane road into a four-lane road with a 25-metre carriageway plus a tunnel. It required the diversion of 57 ha of forests and the felling of some 11,000 trees.

The project had received a statutory forest clearance (FC) from the Union environment ministry. The project proponent, the National Highways Authority of India, received permission to fell trees on August 27, 2021 – and this permission became the basis of the legal challenge to the project before the NGT.

The challenge was on several counts:

On December 13, 2021, the NGT rejected the petitioner’s contention and held that the environment ministry’s FC granted for the project was valid. An appeal against the NGT judgement was then placed by the petitioners before the Supreme Court. The appeal alleged that the NGT, despite being an expert body, had failed to fulfil its adjudicatory mandate by not conducting a proper merit review.

The Supreme Court in turn could have, after adjudication, rejected the appeal, finding no merit in the grounds specified in the petition or in the arguments raised before it. But instead, it chose to arbitrate and conduct a balancing act between the needs of the environment and those of development.

The hard facts listed in the petition, including the fate of 11,000 trees, and points of law raised and prayers for remedy requested both before the NGT and the Supreme Court, were apparently overlooked.

It is now common knowledge that when faced with environmental appeals, even in open-and-shut cases of brazen violations, the judiciary sooner than later tends to arbitrate and pass orders, with little regard to the remedies available under law. This is a far cry from any similar adjudications involving criminal or civil misdemeanours concerning the physical or economic interests of a person, who receives better treatment and exemplary punishment upon conviction.

Why did the Supreme Court do this? One could argue that we could cut a tree here and plant 10 trees to compensate there. But compensatory afforestation can’t be an excuse to resort to it every time, especially when it sounds dangerously similar to “allow one person to be murdered here and 10 more to be brought to life elsewhere”.

Are some laws in need of their adjudicatory rigour ‘lower’ in the eye of the judiciary?

This article was first published in Science TheWire as Compensatory Afforestation Is Not Carte Blanche to Privilege ‘Development’ on 29 April 2022.

Why is a comprehensive National Energy Policy the need of the hour?| 21 April 2022

Miyawaki technique of planting is unnatural, avoid its indiscriminate use| 17 April 2022

Why Does The Forest Survey Disappoint Everyone, Except Forest Ministry?| 24 January 2022

YouTube: Watch Manoj Mishra at IMPRI #PlanetTalks on Interlinking of Rivers (ILR) – A Flawed and Avoidable