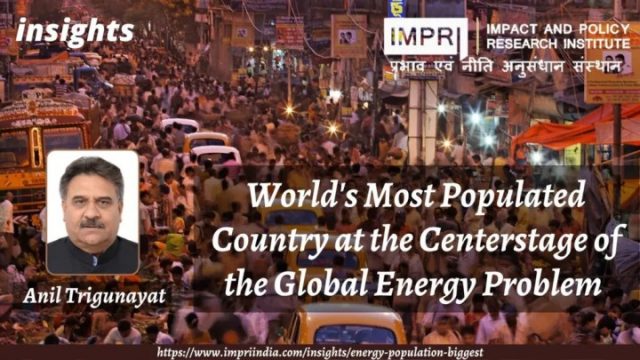 Earlier this month, the UN revealed that next year India is set to overtake China and become the country with the biggest population in the world. India’s population has grown rapidly, and with it, its energy consumption, which has more than doubled since 2000. Rapid economic growth has also seen India become a major force in the global energy economy. Now, India’s increasing industrialization and urbanization is creating greater and more complex demands and even more salubrious opportunities than ever on its energy sector, its policymakers, and the international business community.

The government articulated seven focus areas to tackle its energy problems, including a move towards a gas-based economy, cleaner use of fossil fuels, greater use of biofuels, rapid scaling up of renewables, a focus on electric mobility, a shift towards emerging fuels including hydrogen, and digital innovation across energy systems. India’s energy mix must be diversified.

At the moment, over 80% of India’s energy needs are met by three fuels: coal, oil, and, to a lesser degree, solid biomass. To ensure energy security to its growing population while also achieving ambitious renewable energy targets, India must therefore transform its power sector. Renewables and natural gas are at the forefront of India’s diversification efforts. In particular, the rise of solar PV has been spectacular; the resource potential is huge, ambitions are high, and policy support and technology cost reductions have quickly made it the cheapest option for new power generation. By 2030 the ambition is for the energy mix to include a 15% share of natural gas and 450 GW of renewable power capacity.

Fossil fuels are still India’s main source of energy and therefore, historically, the country’s energy security has been determined by its reliance on the Persian Gulf as its main oil supplier. To address its dependency on the Gulf region, there has been a conscious effort to diversify India’s energy sourcing from Africa to Americas. As one of the largest growth markets for hydrocarbons, everyone wants a piece of the pie. And today India’s top oil suppliers include the US, Russia, Nigeria, and Mexico, alongside various Gulf countries.

While the Gulf remains its top oil supplier, some degree of diversification has already been achieved. To further tackle the issue of energy security, the Indian government has encouraged the energy industry to aggressively pursue opportunities overseas by sustaining and promoting engagement with foreign countries and investors as well as international organizations. At the same time, it has created exceptional refining capacities and has merged as a major supplier of petroleum products.

India is actively engaged in bilateral and multilateral cooperation with foreign countries. For example, in May this year, Germany and India have signed a hydrogen cooperation agreement as both countries look to increase green hydrogen production and application. This is a good example of the international community working together to help shift to a low-carbon path and reduce dependence on fossil fuels. Likewise, Denmark and France have emerged as key partners in the Hydrogen mission.

International investors have an exciting opportunity ahead of them. As India aims to reach net zero emissions by 2070 and to meet fifty percent of its electricity requirements from renewable energy sources by 2030, the country will soon become one of the world’s largest markets for a range of clean energy technologies.

Technology developers looking for sales growth should therefore target the Indian market as low-carbon and green technologies are estimated to create a market worth up to $80 billion in India by 2030. Global investment platforms like ADIPEC, the largest gathering of energy professionals in the Middle East, would provide the perfect occasion to explore investment opportunities in India and elsewhere. India is a key player in global energy, not only due to its size and increasing population but also due to its enormous development potential; therefore, its actions and policies are immensely consequential as they will shape the global energy landscape.

On a national level, the overall goal ought to be to provide affordable, reliable, and sustainable energy services to the whole of India as well as to its dependent immediate neighborhood. On a global level, cooperation will be vital as we navigate various energy problems such as energy security, equity, and climate action where India has taken a big lead through International Solar Alliance with France.

This article was first published in The Economic Times as OPINION: The biggest population in the world has a big role to play in global energy on July 28, 2022.