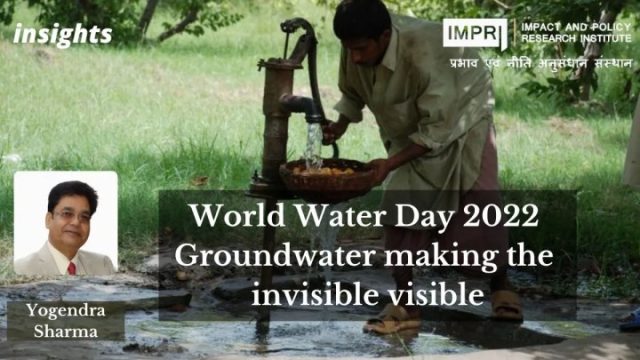 Appeal for declaring “YEAR 2023: The Year of Groundwater”

The evidence on groundwater exploitation suggests that groundwater systems are facing increasing pressure and there has been a significant modification in groundwater aquifers across the globe.

Worldwide, groundwater levels are reducing increasing, which clearly indicates the deterioration in health and services of several ecosystems. This unprecedented stress on groundwater systems in recent times is dangerous because groundwater systems on the Earth are an integral part of any ecosystem which delivers services to a range of biotic and abiotic resources.

Water in its all three physical forms: solid, liquid, and gaseous has always been central to the existence and survival of all human civilizations, however, the close linkages between groundwater and ecosystem services are still not recognized and often undervalued. In brief, the management of groundwater is mostly found invisible in the policy-making of a number of countries.

Scientifically, groundwater systems have a positive correlation with their surrounding environments such as land, forest, and hydrology that provide recharge through precipitation. In order to inform the policies governing groundwater resources and to inspire human actions across the globe particularly by embedding these efforts into mitigation and adaptation majors towards climate emergency, it is vital to recognize the role of groundwater in the continuance of many ecosystem services.

Although the literature is rich in documenting the crucial role that groundwater plays in the economy by meeting water demand for domestic, irrigation, and agriculture sector; there has been relatively little research and empirical studies on identifying the linkages between groundwater systems and various ecosystems services.

Thankfully, the current year’s theme for World Water Day 2022 is focused on “Groundwater: making the invisible visible”, which is good news for all stakeholders involved in groundwater management. Considering a good opportunity that ‘World Water Day 2022’ offers to make ‘groundwater visible’ in the policy-making at the national and international level,

the celebrations shall administer an oath on 22nd March 2022 with a loud appeal to all Member States of the United Nations for declaring “The YEAR 2023: The Year of Groundwater”. Such historical declaration will be revolutionary in bringing a remarkable change by launching a year-long global campaign for mass awareness, protection, and recharge of our precious groundwater resources in the world.

Wishing you all a very happy ‘World Water Day 2022’ in advance.

Yogendra Babu Sharma is working with the Government of India, Ministry of Jal Shakti, Central Ground Water Board