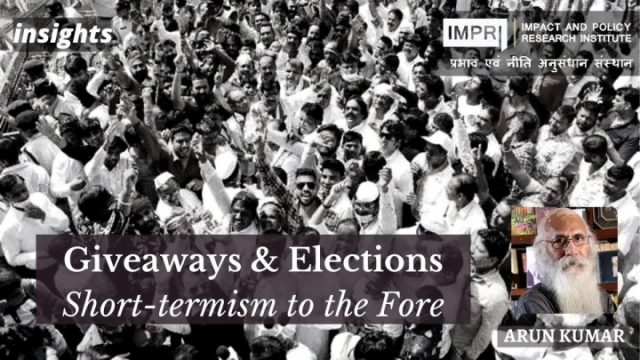 BJP and AAP are the two winners in the just concluded crucial Assembly elections. The scale of victory of these two parties surprised most analysts. In UP after three decades, a ruling party won, overcoming severe anti-incumbency.

There are accusations of the rigging of the EVMs but this can’t be proved when VVPAT slips are not being fully counted. Even if they were to be counted, fraud could have been committed in other ways and this could become an endless exercise. AAP, a new kid on the block, won on the promise of change from the terribly corrupt politics of the moribund established parties.

So, the ruling BJP won because it said that it had brought about a change in the lives of the common people while AAP won on the promise of bringing about change in their lives. What is this change that was so attractive to the people?

BJP faced anti-incumbency due to high inflation, youth unemployment, farmers’ discontent, COVID mismanagement, etc. But its cadres went door to door to point to the Rs. 6000 is given to farmers, free grains, etc. to households, money for toilets and houses, etc.  The beneficiaries from these schemes are called `Labhartis’ by the pundits.

The opposition also promised various things if they came to power but obviously, a bird in hand is better than two in the bush. Also, the credibility of the opposition parties in UP is low since they delivered little when they were in power earlier. Finally, public memory is short. Many of the schemes that are listed as achievements by the present government were initiated by the earlier regimes.

AAP benefitted from its record of delivery in Delhi on four things – education, health, electricity, and water. Its reform of education has become a model which is sought to be emulated by other states. The poor have benefitted from free electricity, water and `mohalla’ clinics. This makes AAP’s promises to the people of Punjab credible. Of course, there is a big if. Delhi is rich due to its high per capita income which yields enough resources to finance the giveaways.

Punjab is a fiscal deficit state with a high debt resulting in a huge burden of interest payment and a bleeding state budget. Punjab had been complaining of stepmotherly treatment by the Centre and this can only get worse as the BJP would not want AAP to succeed lest it spreads its wings to other states. AAP is already eyeing the forthcoming elections in Gujarat and Himachal Pradesh. It had earlier opened its account in Surat and now in Goa.

So, the successful delivery of giveaways to people has benefited the winning parties in the recent elections. It also worked for AAP in the previous Delhi Assembly elections. But the financial and business analysts sneer at the giveaways, calling them fiscally imprudent.

Giveaways refer to subsidized (could even be free) provision of goods and services. This goes against the `capitalist’ principle that `workers have to earn from the sweat of their brow’. So, nothing should be free. But, businesses and middle-class taxpayers get many concessions.

These have been estimated to be around Rs.5 lakh crore annually since 2006. They are justified as incentives to production and to savings. Similarly, giveaways to the marginalized sections also lead to greater demand in the economy and a boost to businesses. On this ground, the World Bank has proposed Universal Basic Incomes (UBI) in recent years and legitimized giveaways. In India, CII and FICCI have favored the giveaways in recent years.

Those opposed to giveaways argue that they lead to a higher fiscal deficit. Since under the FRBM Act, the Fiscal Deficit has to be kept below 3% and the Revenue Deficit at 0%, giveaways prevent these targets from being achieved unless other essential expenditures are curtailed. Or, direct taxes are increased and that worries businesses.

Given that the giveaways are helping to keep the rulers in power, it is unlikely that they would be phased out. In fact, more states are emulating what has worked in some states. Bicycles, laptops, mixie and so on have been given by governments in various states. The issue is whether this is the best way to boost the economy?

Indeed not. It would have been better to use the money to create productive employment so that people could earn incomes with which they could themselves buy what they needed. As the pandemic has shown, vast numbers do not have funds to buy even one week of essential supplies. Under these special circumstances, it was critical to give the marginalized sections food and the basics of life. Farmers have been pauperized over time because of a lack of a remunerative price for their crops. Recognizing this, the government initiated the transfer of money under the PM Kisan scheme.

PRICE survey shows, 60% in the bottom rungs of the income ladder have lost incomes since 2015-16 – a result of the wrong policies of the government. Demonetization, GST, NBFC crisis, and the pandemic-induced lockdown have pauperized the unorganized sectors of the economy. Not only incomes have been lost, but the loss of employment has dented people’s capacity to earn a livelihood. Inflation has further pinched their pockets. So, these affected sections have needed transfers from the government to survive.

To sum up, due to the wrong policies the marginalized lost lakhs of crores of incomes annually, and then they were offered a fraction of this loss as benefits under the welfare schemes. People seem to discount the former but are grateful for the benefits received every year.

They also don’t see that the giveaways will give them more employment or incomes or the farmers a remunerative price in the long run. They will constantly need to be given something as supplicants. The money being spent now could have been better used to create productive employment and freed them from dependency.

People have turned short-terms. A benefit now is better than a promise of a better life in the future with higher incomes and employment. They do not trust the system to do that because they have not seen that happen over the last 75 years. The fruits of development have accrued mostly to the top 10% with little trickle down. This was visible during the pandemic.

This article was first published in Public India as Giveaways & Elections: Short-termism to the Fore on 14th March 2022

Prof. Arun Kumar is Malcolm Adiseshiah Chair Professor, Institute of Social Sciences, and the author of `Indian Economy’s Greatest Crisis: Impact of the Coronavirus and the Road Ahead’. The views expressed are personal