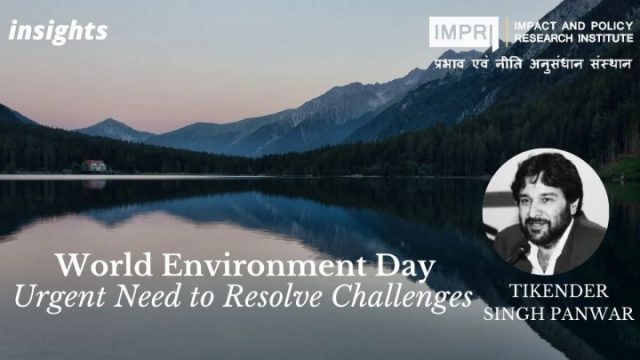 “Only One Earth”; despite knowing it, assimilating it into the consciousness that we all, and that is humans, flora and fauna can coexist only, is still difficult to imbibe.

“Only One Earth” is the theme for World Environment Day on June 5, 2022. The various reports of the Intergovernmental Panel on Climate Change(IPCC), the recent one being the VI in the series, point out the severe challenges the planet earth and all those inhabiting this planet face.

The challenge of climate change is real. The recent working groups of scientists, WG 1, 2 and the latest 3, have come out with the latest scientific data causing climate change; currently observed and projected impacts on the planet and the humans; on mitigation.

WHAT DO THE REPORTS SUGGEST?

Firstly, the reports point out the catastrophic levels of carbon emissions in the post-industrial period. These emissions have led to a rise in temperature. Since many COPs (Conference of Parties), particularly COP 15 in Paris, the goal is not to allow a rise of more than 1.5 degrees Celsius than the pre-industrial levels.

Another interesting fact is that half of the world’s human-made atmospheric carbon dioxide was emitted in the last three to four decades. And in this period, just 20 big companies that contributed to almost 33% of world-historic emissions(energy and cement) are still at work and even grabbing subsidies for fossil fuels, etc. Between 1758-2020, CO2 emissions swelled from 0.01 billion metric tonnes to 34.07 billion metric tonnes.

Secondly, the imminent threat or the processes in which this threat is affecting the planet earth is from the various factors:

Hence all of this is interconnected with systemic failures. World capitalism being the solely responsible system for such an extinction reality is not hidden anymore. But, the political forces across the world are dominated by the votaries of such a system; hence to expect a ‘climate disruption’ (in intervention) all of a sudden is not even a utopia for the moment; to talk about reality is a distant dream.

The big players in the global north have been pushing to continue with their high per capita emissions and support the developing and the least developed world through a financial support system through the transfer of technologies. However, this has also not been done. The rich countries were supposed to transfer $100 billion to the developing world; however, not even 20% of this was shared with the developing/least developed countries.

Whereas it is important to note that the Working Group 3 focuses on mitigation strategies, however, the developing world must focus on strengthening its adaptive capacities.

Not that mitigation strategies or plans are not important, but the sheer impact of climate change on human lives and habitat in the global south is phenomenal. The Anatomy of a Silent Crisis vividly illustrates such a phenomenon where the largest impact of climate change takes place in the developing and least developed countries. In contrast, their contribution is the least to the human-induced changes in climate.

In the Indian context, it is high time that the developmental strategies are revisited, and in the urban Indian context, the following areas must be of priority and concern.

The Paris climate talks, Sendai framework, UN-Habitat III, World Urban Forum, UN Sustainable Development Goals(17), etc., all have a standard feature. The impact of climate change is accurate, and it is high time that we start working on it- both on mitigation and adaptation strategies. Those who have contributed more and have gained the most by usurping the carbon spaces must contribute more to mitigation strategies.

The ministry of housing and urban affairs in India must at least start preparing a disaster atlas for all the small and big towns in the country and do it in style like Kerala is doing-with people’s participation. So that whence the disaster strikes, as more and more are in the offing, the people who have prepared these plans are part and parcel of the resilient framework and act accordingly. This will reduce the loss of lives and assets.

This article was first published in News Click as World Environment Day: Challenges Galore, Need to Act Fast on 5 June 2022.

Roadmap for mitigating heatwave challenges| 13 May 2022