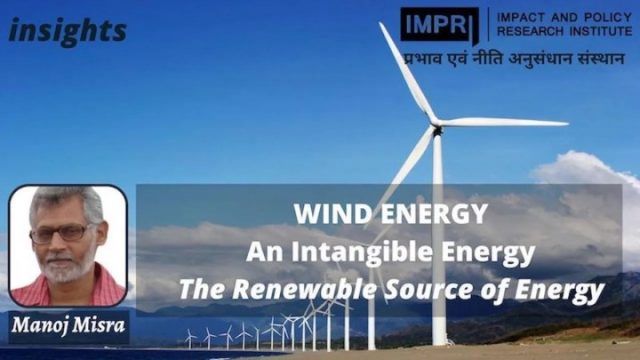 Vayu Dev (Wind God) is primordial. It occupies the place of pride in Hindu pantheon having been the very first to receive ‘soma’, the celestial drink. Synonymous with breath (prana) it is the very basis of life on earth as we know it.

Wind powered the sails on boats since time immemorial to move men and material up and down the streams and across the seas. Forcing itself through narrow slits it produces sound that must have captivated the primitive humans who in due course used it to create pleasing music. Flute is one of the finest examples of manmade musical instruments producing soothing notes.

Much later in the 9th century CE windmills originated in the Middle East and central Asia to pump water and grind grains. Soon they spread both west and eastwards into Europe and China.

Don Quixote in early 17th century Spain wasn’t incorrect when he presumed windmills to be giants fit to test his chivalry. One, they were everywhere as an unmistakable part of the landscape, secondly they were in your face size-wise. Whether the delirious Don got better of them, only a perusal of Cervantes “Don Quixote ” can tell but few messages from the famous book are obvious.

Wind has been an utilizable powerhouse for ages, although the contraptions developed to make use of its power needed to be giant size. This requirement has not varied down the ages and even today a modern day Don Quixote might be tempted to challenge the latest versions of windmills. Windmills in Spain, the setting of Don Quixote served primarily as saw mills and for crushing grains. In Holland, the ‘land of windmills’ were used initially to drain out wetlands for conversion into farmlands. In China they were used to pump seawater inland to make salt.

A wind turbine to produce electricity was first invented in 1887 interestingly on both flanks of the Atlantic by James Blyth in Glasgow (Scotland) and Charles Brush in Ohio (USA). It took another 50 years before a French engineer Georges Darrieus in 1931 patented a wind turbine named after him.

World’s first megawatt sized wind turbine called the ‘Smith-Putman’ was developed in 1941 in Vermont (USA). During the Second World War, German U-boats used small wind generators to recharge their submarine batteries. But the world’s first wind-farm with 20 wind turbines, at 30 KW each came up in 1980 in New Hampshire (USA).

Today wind farms, both onshore and offshore can be found dotted all over windy coast lines, seas and deserts inlands. Globally till the end of 2021 some 824 GW of wind energy capacity had been installed with China (328 GW) at the forefront. In India it is 40 GW which is about 10% of the nation’s installed energy generation capacity.

While wind has traditionally been and continues to be one of the true renewable sources of power its fickleness marks its frailty. It is well known that the Sun’s propensity to warm land surfaces disproportionately creating pressure differences between different places is what causes a wind to flow.

This makes wind moody and unreliable as a dependable motive force except in well known windy locations like coasts, hill ridges and canyons. Also in open areas like deserts where natural and manmade obstructions to wind flow are absent it is windy.

Wind energy like solar is truly natural and carries a relatively low environmental footprint. Recent technological improvements in blade design, materials, onsite assembling and turbine recycling are making wind energy far more efficient and quieter than before. While on-shore sites for economical wind energy production are limited it is off-shore (in the windy seas) locations where the potential for energy production are immense.

The International Energy Agency forecasts that by 2040 wind energy shall be meeting around 9% of global energy demand against the current 5%.

Wind energy farms are often located far away from the energy consumption hubs like the urban centres requiring installation of long transmission lines with concomitant enroute energy losses, its conversion into heat and warming of the ambient atmosphere. Large sized blades of the windmills produce a lot of sound which is its major drawback.

A modern windmill has three key components; a tower, rotor blades and a nacelle (housing for generator, gearbox, brake assembly etc). All of them are material heavy using steel, fiberglass, plastics, cast iron, copper and aluminum. With mining involved and processes that use fossil fuel it cannot be said that wind energy involves no GHG emission at least as part of its founding costs. Rotor blades with their continuous exposure to elements have a short shelf life of no more than 15-20 years.

Then there are serious biodiversity risks involving birds and bats getting killed or disoriented and an overall degradation of the wildlife habitats in areas where these wind farms are located.

So where do we go from here?

Should it be the technology way, which includes emerging ones like airborne wind energy, offshore floating concepts, smart turbines etc., or we make conscious lifestyle choices aimed at reducing energy use and its wastage which is rampant today, so that ‘less’ proves to be ‘more’ in the long run? Experts might opine a hybrid approach in the short term but the latter approach in due course.

Hopefully the changed lifestyle approach shall be soon for man-made climate change is making us cower with greater intensity with every ‘new’ year. Let us not ignore the fact that 2022 only past its half life has already created mayhem not only in terms of unheard of previously recorded high ambient temperatures and drought conditions in Europe, Americas, Africa and China but devastating monsoonal floods in Pakistan, India and Bangladesh. Writing on the wall for humanity’s future on earth could not be clearer.

Published at The Dialogue as Wind In The Sails – Wind Power As A Renewable Energy Source on August 31, 2022

Read another piece by Manoj Misra- Clean & Sustainable Energy: The Next Generation Source of Energy in IMPRI insights

Read another by Manoj Misra – Worlds Oldest And Still Functioning Dam: The Story of Raja Bhoj and its Mandideep ‘Island‘ in IMPRI insights