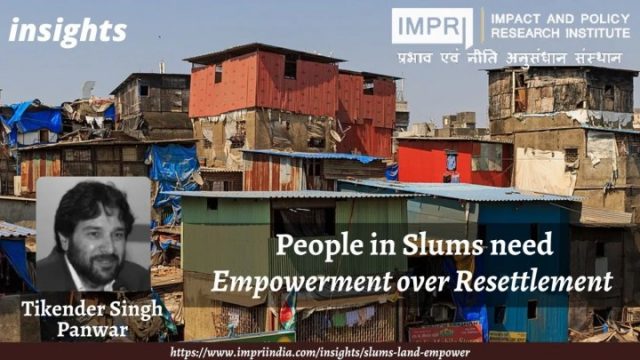 Slums require a new paradigm approach for comprehension. Just treating slums as ugly settlements and a tarnished spot in the city smacks of a highly elitist class viewpoint prevalent even in the planning process.

Slums are a symbol of the failure of the planning process in urban India. The urban planners have failed to comprehend the issues of migration and large-scale shifts in the political-economic life of the cities.

The continuation of harping on the idea – that the industrial revolution would create spaces for a decent living for the working people in the cities and hence they should be planned for high mobility ensuring the travel of the workers from one corner to the other – did not work.

Because in the mid-80s, the large cities based on the industrial production of goods started paving way for a different economy. The large cotton textile and jute mills started closing down and a more informal economy based on services started developing.

The large working population, poor people, migrants, and workers who were thrown out from the production process had to find a place of habitat. They answered back the planning authorities by occupying land in the peripheries of the cities.

The UN report, “The Challenge of Slums”, which is considered to be a bible on slums, estimates that urban India has 55% of people living in slums. However, the government estimates say 15% But the total geography of slums is not even 0.5% of the city spaces they occupy. It is just this tiny patch that they occupy with very high density.

The slums have always been looked down upon as dirty spaces where crime and disease proliferate. Hence, during the earlier periods, there were efforts for their removal, and later as neo-liberalism was adopted as the guiding framework of development in the mid-90s, land occupied by the slum dwellers was considered of high value and their translocation was imminent.

Under various policies, slums’ translocation began with sugar-coated models as public private partnership (PPP). Under this model, private capital—real estate builder—was supposed to construct houses for the slum dwellers. Such houses, instead of single or two-storeys, were high rises, nearly 10-12 storeys, like the Mumbai resettlement model etc. The vacated land was supposed to be utilised by the developer to earn profit.

This did not work much; Ahmedabad relocation has been a complete disaster, where nearly 2 lakh families were supposed to be rehabilitated. However, only 6,000 were rehabilitated according to various reports and RTI responses from the municipality of Ahmedabad. There are various reasons why this model did not work.

Firstly, the houses constructed were too far from their place of work; it took a lot of time for them to travel and spend money on such travel. Second, the apartments constructed were not sustainable. Every month, a cost for maintenance and operation was required to be borne by the householders. Third, the place of habitat could not provide alternate means of livelihood for the translocated slum dwellers.

Then came the model of “in situ” construction-slum redevelopment. It meant that the houses for the slum dwellers will be constructed at the site where they were living. However, their horizontal space will be squeezed and vertical growth will be allowed. The space thus created will be utilised by the builder to monetise land and further sell the apartments constructed on such land vacated after the slum dwellers are provided with alternate housing.

It had partial success. Some of the models of this redevelopment are seen in patches along the Bombay airport. The private developer constructed houses for 400 families and the vacated land was then used for the construction of a five-star hotel. This also did not achieve the desired success.

The main reason pertains to the high-rise growth and the unsustainability of such apartments in even managing water and electricity supply. The size of the apartment is also too small. It is just 25 square metres. This is insufficient for a family of four.

It is interesting to note that nearly 95% of the slum dwellers are living in houses that do not require much alteration. The demand of the slum dwellers is that they be provided land ownership rights called patta in many states. The land entitlement will itself effect the growth of the economy in these colonies. The government must start ensuring that basic facilities like water, sanitation, social infrastructure like health, education, roads etc., are provided and the redevelopment of the slums is put on hold.

But the challenge is immense. In one of the conferences of Basti Federation in West Bengal, it was pointed out that the threat of eviction is looming large. And many of the bastis are on railway land. Throughout the country, many of the slums have come up on railway and defence land and the threat of their eviction looms large.

According to a study conducted by CPR(Centre for Policy Research), in Delhi the informal settlements house nearly 75% of the population (Heller, Patrick, Partha in Exclusion……an overview of cities of Delhi Project, 2015).

M M Ashish Ganju, in one of his seminal works in a slum basti in Aya Nagar, Delhi, discusses spontaneous urbanisation in a book titled Radical City. The spontaneity of the process of urbanisation in the slums is a feature that flows from the failure of the planning authorities in building inclusive cities. The poor and the marginalised as discussed above find their spaces in the bastis, but which have their own dynamics.

Since Ganju himself was a planner and planned to stay in a slum instead of a gated middle-class colony in Delhi, he brings out the nuances and intricate relationships that exist in these bastis and also the mechanism of grievance redressal.

In a video on YouTube, “An Out post of Delhi”, there is a depiction of this basti called Aya Nagar. Ganju writes, “There are about 200,000 people living in this settlement now… [T]he core area, the village has a rainwater harvesting structure or johar, which has not become a sewage collection place. These johars and other water retaining structures in rural areas of Delhi have mostly got filled up and destroyed, but in Aya Nagar, we have kept this structure alive for two decades. The chief minister supported our efforts to try and redevelop the johar, which we are still doing for over 20 years.”

Speaking about the challenges that these slums have particularly about drainage and sewage, he writes about the role played by the community and the resources generated with the help of the Delhi government in mitigating the crisis. Why is it important? Because in Delhi on average shit has to travel 15 km before getting treatment in STPs. These are not sustainable forms where the shit travels more than the average time of a worker.

In Aya Nagar, with the help of bio digestors, primary treatment of soil and wastewater was done, secondary treatment is done by bio-remediation in a reed bed, and treated water is then recycled for use by residents.

Such a form of decentralised and democratic intervention is a major disruption for the neo-liberal push for more capital-intensive technologies, the fallout of which is neither sustainable nor desirable.

The Aya Nagar model was also helped by the DUSIB and is functional. Ganju writes about this project, “The implications of this experiment in sanitation management need to be understood in terms of spatial planning. Decentralised sewage treatment and recycling of treated water within an urban neighbourhood allows us the freedom to design convivial built environments once again. Urban form which is not dependent on the tyranny of heavy engineering required for laying extensive piping networks can encourage building layout which priorities human needs over technological imperatives. City design may again become an exercise in promoting civic values something we seem to have lost in the twentieth century.” (Sadly we lost Ganju on May 7, 2021 to Covid-19.)

The whole point of bringing this example in this write-up is to showcase that in the bastis form of urbanisation, we should have people as the priority and instead of thinking in terms of relocation, and resettlement, the competition must be held in designing these slums by some retrofitting, suturing, acupuncture etc. As Gautam Bhan (Professor at Indian Institute for Human Settlements), in one of his interventions in IIT, at a session that I was chairing, presented the idea of giving a butter paper to the planners, which they love a lot. Designing new cities must be relooked at and efforts must be made for suturing and fixing the gaps in the given situation.

The DUSIB, recently, held a meeting to finalize a framework for the management of slums in some 621 notified slums in Delhi. The DUSIB Act permits it to do so. Though there is a complexity of governance models from the municipal corporations under the 74th Constitutional Amendment to the current state government to work in this direction. Nevertheless, if DUSIB engages with the people and does not just act as another body to dictate decisions, it should be a welcome step. The silver line is that the slum dwellers must be democratically empowered to take decisions on their own and this will also lead to challenging their own cartels of leadership where a few individuals decide their future.

This article was first published in Newsclick as Empower People in the Slums Instead of Resettling Them on September 11, 2022.