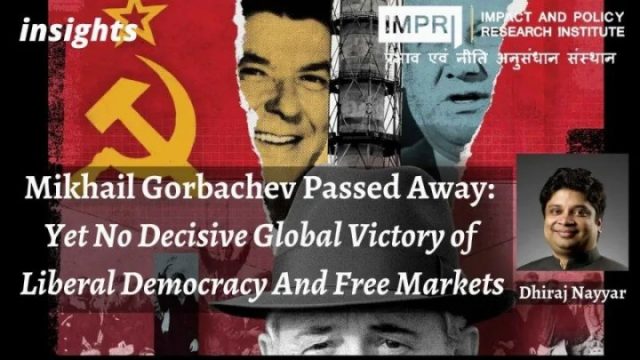 Thirty years on, it is clear that there is no decisive global victory of liberal democracy and free markets. Even so, both our ideas worth fighting for.

The death of Mikhail Gorbachev, the last leader of the Soviet Union brought back memories of the proclamations of the end of history that followed the spectacular collapse of Communism in Europe. But thirty years on ,it is clear that there is no decisive global victory of liberal democracy and free markets. Even so, both our ideas worth fighting for.

Fortunately, globally the market economy remains the favoured system to delivered prosperity, but there is a return of a greater degree of State intervention in both the advanced and emerging economies of the world. Of course, no economy is ever entirely free. but the aftermath of the global financial crisis of 2008, the Covid pandemic of 2020 and the Russia- Ukraine war made the faith in markets decline and made the environment for more extensive state intervention more fertile. Who would have thought that the successors of Margaret Thatcher in the UK would implement price caps ( on energy) financed by a big fiscal deficit. However, what should not be forgotten even as the State makes a comeback is that State intervention leads to positive outcomes only when state capacity is high and not overly interfering with the business of business.

Comparision between China and Soviet Union

The rise of China remains the defining economic story of the golden age of free markets- the quarter of a century after the collapse of Soviet Union. China, with its superior state capacity and liberal policies towards business has moved from a per capita income up around $350 to $12000 after 1991. The rise of India, which have moved from a similar per capita income to China in 1991 to $2100 thirty years later, is also a thumbs up to the power of market while also being a cautionary tale of inferior state capacity and excessive state intervention which have prevented growth from being as rapid as it might have being.

The other impressive story of market delivering prosperity has come from East Europe, where after an initial struggle, most countries have achieved reasonable economic prosperity mentored by the European Union. Almost every non-USSR Communist country is the member of EU. Some have even adopted the euro as currency, including the three ex-Soviet Baltic Republics. In terms of per capita income , most are well behind the levels of rich Northern European countries, but much of East Europe has caught up with Southern Europe.

The political legacy of 1991 is less defintive. The fact is that today the rising second superpower of the world is a Communist polity. The fact also is that the one major country at war with a neighbour in defiance of the pre-eminent superpower is also an authoritarian state and the successor state of the Soviet Union. The people of Russia may look at China and more recently Vietnam and rue how Gorbachev and his fellow Communists ran their country aground- the economy’s best assets captured by oligarchs, a collapse of GDP pushing the population into poverty and an unstable electoral democracy which faded within a decade. China, on the other hand, began its transition away from a controlled and autarkic economy in 1987, several years before Gorbachev’s Perestroika and Glasnost. Vietnam began its “Doi Moi” economic reforms in 1986, not that far behind Gorbachev. However the Communist leaders of both the countries beginning with Deng Xiaoping in China and Nguyen Van Linh in Vietnam managed a difficult transition much more successfully than Gorbachev, preserving their political power by delivering growth and increased incomes for the people.

The defence of Gorbachev, it could be argued that those countries had more space to make the transition. They were poor countries and the population had limited expectations when reforms began. Soviet Union under Gorbachev had been a global superpower for half a century and had considerable achievements in terms of industry and technology. It was also engaged in an expensive Cold War with the West, which drained it resources. Perhaps there could have been no managed transition from where the Soviet Union stood in the 1980’s an Emperor with no clothes. China’s economic rise happened over quarter of a century. Vietnam’s even longer The Communists in Russia may not have the time, resources or public support to transition a superpower to something less before a long comeback. Still the plain facts remains that controlled and insular political system seem to have a longevity that controlled and insular economic systems do not.

Even in Russia, after the chaos of the Yeltsin years, Vladimir Putin restored a controlled and insular political system with considerable help from a bounty of oil and gas revenues. However, in a bitter twist of fate, it is now a subordinate power to China, unthinkable in the heydays of the Soviet Union.

A global churn is ongoing in politics. Like economies, politics also moves in cycles. Still, there is every likelihood that the long arc of global history will still bend in favour of freedom, both political and economic, but it will require continuous, tireless batt against forces that favor control.

Read another article by Dhiraj Nayyar- Correct Approach to Disinvestment: Dribble Small Stakes Throughout the year in IMPRI insights

Dhiraj Nayyar, the Chief Economist at Vedanata and Guest Writer at IMPRI