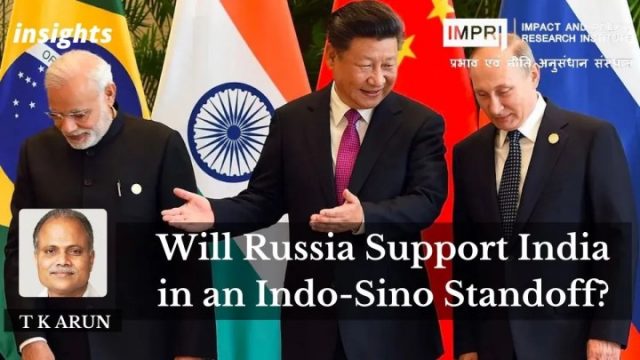 Modern chess evolved from the game Indians called chaturanga, meaning four angas or anatomical parts. The four elements of the ancient Indian army were the infantry, the cavalry, the elephantry, and the chariots. Moving pieces to gain an advantage, anticipating the opponent’s countermoves, is the nub of the game.

Geopolitics is a lot like playing chess. You position your pieces to gain the advantage, not because you like or dislike any particular piece. You could sacrifice the queen, if that is the path to victory, as unsentimentally as you would take the opponent’s rook. It is that lack of sentiment that many people fail to appreciate when they reach facile conclusions on the relations between nations.

In the popular mind, Indo-Russian relations are about Raj Kapoor songs and lingering gratitude for the Soviet navy’s interception of the US 7th Fleet’s Task Force 74 as it moved towards the Bay of Bengal, to threaten India during the 1971 war in East Pakistan.

In the same vein of humanizing international relations, many conclude that Russia’s indebtedness to China for its support during the ongoing Ukraine war, economically and politically, would rupture Russia’s support for India in the face of Chinese aggression. Whatever the sentiment, Russia would continue to support India. Because that is in Russia’s own interest.

Not that sentiment plays no role in relations between nations. It does. The immense soft power that the West wields over nations like India colors the discourse, and could even impede the rational pursuit of the national interest. So how does the national self-interest of Russia, China, and the US play out vis-à-vis India?

The expansion of Nato to include assorted former Soviet bloc countries has been an attempt to undermine Russia’s loss of salience as a global power. The West loved Boris Yeltsin and his chums, who not just disbanded the Soviet Union, but also eviscerated Russia’s economy by handing over valuable economic assets to their cronies — the so-called oligarchs —as well as by failing to put in place a functional system of governance and regulation, without which a market cannot function.

Vladimir Putin put an end to this dissolution of Russian power when he took office in 2000. He even sought Nato membership for Russia, a request that was dismissed out of hand by the West. It was only after Nato decided to offer membership to Georgia and Ukraine that Putin turned actively hostile to the West. He attacked Georgia in 2008, putting paid to any plan for Georgia to join Nato. In 2014, when a pro-West popular uprising threw out a pro-Russian regime in Ukraine, Putin moved in, to annex Crimea, which, till 1954, had been part of Russia, and hosts the base of Russia’s warm water navy.

Extending Nato to Ukraine would bring Nato missiles to Russia’s borders. As it is, an extension of Nato to Poland, Latvia, Lithuania, and Estonia has brought St Petersburg within the range of short-range Nato missiles. The Cuban missile crisis, it may be recalled, had been about the US stomping into the ground Cuba’s sovereign right to place missiles of any nation it befriends on its territory. No power allows hostility that amounts to an existential threat to thrive in the immediate neighborhood.

By forcing Russia to docilely accept Nato missiles in Ukraine, the West wanted to tell Russia and the world that Russia no longer matters, despite all its nukes. It is this that Russia opposes, primarily, in its action against Ukraine.

For the US, its geopolitical rival of significance is China. It is to contain China that George W Bush gave India its nuclear deal, thereby releasing India from assorted technology denial regimes, imposed originally to rid India of its nuclear ambitions. India continues to be a significant ally in the Asia-Pacific region for the US, in its quest to keep China in check. Hence its membership of the Quad.

China does not want to be the sole focus of western hostility. Its interests are served by the West having to commit some of its men and materiel to Russia.

That calls for retaining Russia as a significant geopolitical power. That is why China supports Russia over Ukraine.

It is in India’s interest to retain Russia as a global power center. The alternative is to confront the dual hegemony of the world by the US and China. Given China’s aggressive claims on Indian territory, that would redound to abject dependence on the US to resist China, scrapping India’s hopes for strategic autonomy.

China wants Russia as a power center that would consume the West’s attention and resources. Russia wants to retain its own geopolitical relevance. It has not invaded Ukraine and taken China’s help to give up that relevance. Just as the West gains by propping up India as a counterweight to China in Asia, Russia also gains by India’s ability to stem China’s rise to become the principal countervailing force against the US.

In other words, the interests of Russia and the West converge in keeping India alive as a viable counterweight to China. China’s desire to have Russia as another pole of global power implicitly entails acceptance of India’s role as a counterweight to itself.

Probably, China would count that as a pawn sacrifice.

This article was first published in the Sanjaya report as Russia will support India in a stand-off against ally China. Here’s why on 30th March 2022