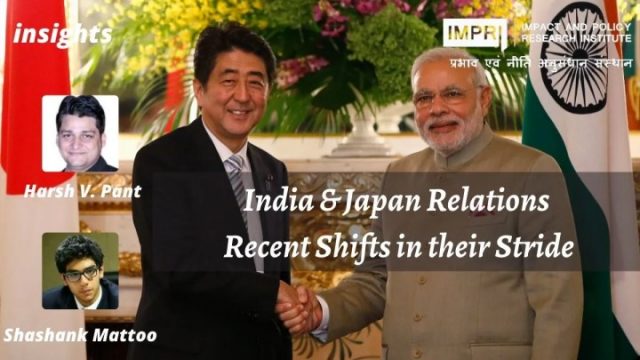 As Japanese Prime Minister Fumio Kishida landed in Delhi, the stakes were high. While both sides were meeting to continue the tradition of annual bilateral summits, neither party could ignore the broader shifts in the international system. For some weeks now,

New Delhi has watched as much of the Western world and its allies abroad, including Japan, have mobilized in the wake of Russia’s invasion of Ukraine. As whispers of Western discontent with India’s more measured position on the Ukraine crisis made the rounds, New Delhi’s first in-person meeting with a major ally would be a portent of things to come.

Fears of a major diplomatic blowback were soon laid to rest as New Delhi and Tokyo pushed the envelope on what is fast becoming one of India’s most vital diplomatic relationships. From the headline-grabbing announcement of an additional $42 billion in Japanese investment over the next five years to a slew of partnerships in cybersecurity, development assistance, and clean energy development, it was evident that bilateral ties remain on an even keel.

Older diplomatic efforts, including Tokyo’s vital support for high-technology innovation and development in the Northeast, have continued to keep pace. This business-as-usual diplomacy will come as a great relief to New Delhi as it signals that India’s partners, contrary to the expectations of many, remain willing to maintain and build on existing ties despite diverging views on the unfolding situation in Ukraine.

From the headline-grabbing announcement of an additional $42 billion in Japanese investment over the next five years to a slew of partnerships in cybersecurity, development assistance, and clean energy development, it was evident that bilateral ties remain on an even keel.

Talks of a major rift were also put to rest by the joint statement, which largely hewed to India’s stated position: Both sides called for international law to be respected and for an immediate cessation of violence in Ukraine. Further, the two Asian powers also continued their more measured position on the political crisis in Myanmar, which was triggered by a military coup in 2021.

As Western powers have unleashed a barrage of sanctions against the junta in power, New Delhi and Tokyo have opted for quiet diplomacy and an Asean-brokered political solution to the crisis. In addition, both partners restated their long-standing commitment to supporting the other’s bid for permanent membership in the UN Security Council. For New Delhi, reaffirming the importance of bilateral ties with a major partner even in the face of differences of opinion on Ukraine has been a major win.

One avenue of cooperation will be of particular interest in the aftermath of the summit: Indo-Japanese defense relations. Tokyo has moved quickly in its ambitions to play a greater role in providing security for the Indo-Pacific, and partners like India have been a key part of its strategic vision.

In 2020, the two nations signed a Mutual Logistics and Supply Agreement (MLSA), which allows the militaries to access each other’s bases and a host of related supplies.

As military competition with China heats up, India and Japan, along with the United States and Australia, have drawn closer in an effort to build a new security architecture. Expanding defense technology development, over and above existing Unmanned Ground Vehicle and Robotics programs, has been rightly identified as a key priority.

As the Ukraine crisis has highlighted, India may be well served to expand its source of armaments and key technologies. Past efforts to boost defense trade, like India’s drive to acquire Japan’s Shinmaywa US-2 maritime reconnaissance aircraft, have run into trouble. Further, the Indo-Japanese MLSA remains a scaled-down version of the more expansive Reciprocal Access Agreement, which Japan recently signed with Australia.

Expanding discussions, including on the exchange of ammunition and weapons, will help lay the groundwork for greater interoperability between the Indian and Japanese armed forces.

Expanding defense technology development, over and above existing Unmanned Ground Vehicle and Robotics programs, has been rightly identified as a key priority.

However, there were two notable disappointments. First, the much-hyped Asia-Africa Growth Corridor (AAGC), a joint Indo-Japanese effort to build infrastructure and connectivity in Africa, found no mention at the summit. This is particularly worrying in the light of reports that the initiative has run aground. Infrastructure and connectivity projects remain a crucial part of India’s diplomatic strategy and influence in Africa and Southeast Asia.

The alleged failure of a major development effort designed in concert with the highly experienced Japanese does not bode well. Given the Quad’s desire to base its diplomatic outreach on meeting Asia’s infrastructure needs, both sides must urgently review and avoid the pitfalls revealed by this mothballed scheme. Second, major progress on reworking the Comprehensive Economic Partnership Agreement (CEPA), signed in 2011, has been elusive.

While trade restrictions on some goods were eased, New Delhi’s long march towards a comprehensive review of the agreement seems likely to continue. While the CEPA did boost bilateral trade, it has expanded India’s trade deficit with Japan. Given that the trade relationship remains fairly underdeveloped, reworking the CEPA remains critically important if Indo-Japanese trade is to be both robust and balanced.

With a successful summit with Japan now in its rear-view mirror, New Delhi will have its sights set on the Quad Leader’s Summit in Tokyo in the coming months.